Media Channel - As The Media Watches The World, We Watch The Media 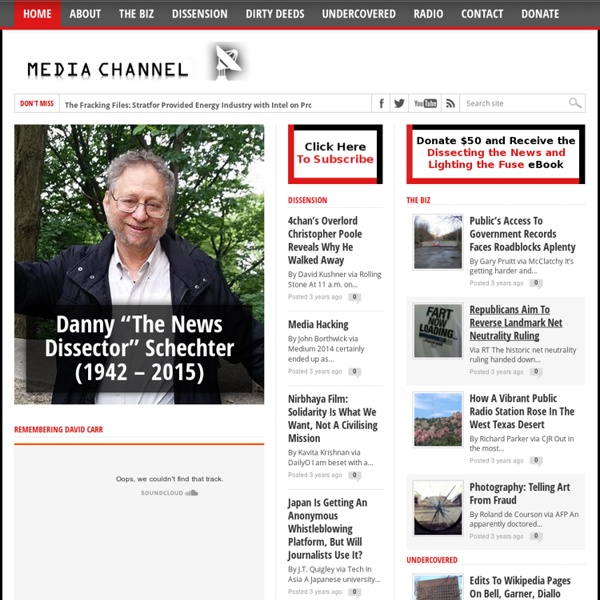 Beyond McLuhan: Your New Media Studies Syllabus - Christina Dunbar-Hester Editor's Note: A new generation of scholars is trying to come to new understandings of how technology and society shape each other. Christina Dunbar-Hester is among those young lions from her position at Rutgers School of Communication & Information. Here, she walks you through her PhD-level class on technology and media. Along the way, she distills a quarter century of academic work that goes far beyond pop culture's standard takes on how our world changes. It's tempting to see new technologies, especially new media technologies, as drivers of political and social change. "Technology is society made durable." In this course we ask, how can we think about media technologies in a smart and critical way? In order to answer these questions (or at least deeply consider them), the course starts with an introduction to theories of technology and technological change, drawn primarily from the scholarly field of Science & Technology Studies. Week One: What is technology? Week Seven: Users

On The Media: This Week The online life of a teenager Jump to navigation  Menu 🔊 Listen Tech Home page - 4-13 Share It! The online life of a teenager Play Pause Support Us LOIC VENANCE/AFP/Getty Images From using common sense to minding your p's and q's, eight tips for how to survive in the social media space as well as the workplace. by Ben Johnson Thursday, March 27, 2014 - 04:00 Story When conversation turns to teenagers and how they use technology, the narrative is usually focused on how teens are disconnected from the real world because of their reliance on smartphones and social media. danah boyd begins her new book, "It's Complicated: the social lives of networked teens," with an observation she made at a high school football game in Nashville: It was the parents, not their children, who were locked into their smart phones. According to boyd, the ability to socialize on one's own terms is what determines when one is keyed into technology, not age or tech savviness. Featured in: Marketplace Tech for Thursday, March 27, 2014 About the author More

PolitiFact | Sorting out the truth in politics Ira Glass’s ‘This American Life’ Leaves PRI So, on the advice of his show's singers, he found himself on the Upper East Side to see a throat doctor to the stars. The office was lined with head shots: Luciano Pavarotti, Celine Dion, Hugh Jackman. Despite being in certain quarters rather famous himself, an awed Mr. Glass snapped photos of all four walls, with close-ups. By Saturday night, his voice was back to its soft, sinusy self; and the audiences, mostly public radio geeks, cheered. Or, as of late, play by its rules. Read More VidCon: Big brands, teenagers, and YouTube stars collide

SourceWatch Koch Spy Agency Led by Voter Fraud Huckster The Kochs have been complaining about a "lack of civility in politics" as they seek to boost their public image--but one of their top operatives helped propel perhaps the most egregious case of race-baiting voter fraud hucksterism in recent years. At the same time that the Kochs have been on a PR blitz, publicly spinning an image of themselves as well-intentioned patriots trying to make the world a better place and decrying "character assassination," they've been quietly ramping up a clandestine surveillance and intelligence gathering operation focused on their perceived political enemies, Ken Vogel reports at Politico. At the helm of this "competitive intelligence" operation is a man named Mike Roman, Vice President of Research for Kochs' Freedom Partners and who was paid $265,000 last year, according to Freedom Partners' recent tax filing. Read the rest of this item here. Wisconsinites Reject the "Eric O'Keefe Session" of the Legislature Rep.

The Sad, Beautiful Fact That We're All Going To Miss Almost Everything : Monkey See iStockphoto.com The vast majority of the world's books, music, films, television and art, you will never see. It's just numbers. Consider books alone. Let's say you read two a week, and sometimes you take on a long one that takes you a whole week. Let's do you another favor: Let's further assume you limit yourself to books from the last, say, 250 years. Of course, by the time you're 80, there will be 65 more years of new books, so by then, you're dealing with 315 years of books, which allows you to read about 20 books from each year. You can hit the highlights, and you can specialize enough to become knowledgeable in some things, but most of what's out there, you'll have to ignore. Oh, and heaven help your kid, who will either have to throw out maybe 30 years of what you deemed most critical or be even more selective than you had to be. We could do the same calculus with film or music or, increasingly, television – you simply have no chance of seeing even most of what exists.

Comments from Left Field Evgeny vs. the internet (Philip Habib) Depending on whom you ask, Evgeny Morozov is either the most astute, feared, loathed, or useless writer about digital technology working today. Just 29 years old, from an industrial town in Belarus, he appeared as if out of nowhere in the late aughts, amid the conference-goers and problem solvers working to shape our digital futures, a hostile messenger from a faraway land brashly declaring the age of big ideas and interconnected bliss to be, well, bullshit. To say that Morozov has gone out of his way to irritate powerful and influential people in the tech world doesn’t quite capture it. Or try this passage. The entire Morozov aesthetic is in this sentence: the venom, the derision, the reverse jujitsu of his opponents’ sanctimony, the bald accusation that all the talk about a new age of human flourishing is nothing but an attempt to vamp the speaker’s consulting business. Morozov is a heretic in this world. Talking nonsense A critic evolves The cost of bullshit