There’s no app for good teaching 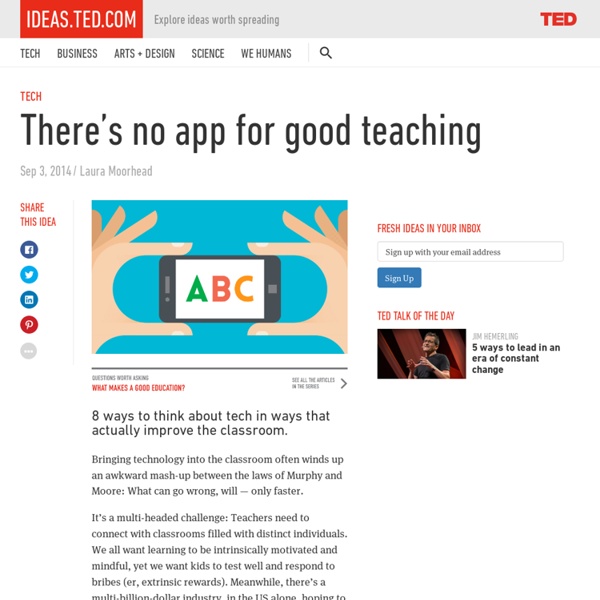 8 ways to think about tech in ways that actually improve the classroom. Bringing technology into the classroom often winds up an awkward mash-up between the laws of Murphy and Moore: What can go wrong, will — only faster. It’s a multi-headed challenge: Teachers need to connect with classrooms filled with distinct individuals. We all want learning to be intrinsically motivated and mindful, yet we want kids to test well and respond to bribes (er, extrinsic rewards). Meanwhile, there’s a multi-billion-dollar industry, in the US alone, hoping to sell apps and tech tools to school boards. There’s no app for that. But there are touchstones for bringing technology into the classroom. “App-transcendence,” says Howard Gardner, a professor at Harvard’s graduate school of education who is known for his theory of multiple intelligences, “is when you put the apps away and use your own wits, not someone else’s.” 1. Skip the templates and overly pat apps. 2. 3. 4. 5. 6. 7. 8. Featured artwork via iStock.

Why did this simple Google Search get retweeted 3,500 times? ‘Tis herself: A search for “english major who taught herself calculus” returned The Calculus Diaries by Jennifer Oulette. Plus one viral tweet. Last Thursday morning, I was following up on a book recommendation from sometime-TED-blogger Ben Lillie. How to prepare for a good death Death is an uncomfortable topic. Although we’re well-acquainted with platitudes that remind us to seize the moment and live each day like it’s our last, few of us devote real time to envisioning the end of our lives — or the lives of those we love. In contrast, this is a focal point for BJ Miller, palliative care physician and executive director of the Zen Hospice Project, a San Francisco-based nonprofit that’s focused on improving our experience of death. His TED Talk, What really matters at the end of life, prompted such an outpouring of response that we hosted a Q&A on Facebook to hold a larger conversation about end-of-life care, dying with dignity and providing support for patients and families.

12 resources explain Tim Berners-Lee’s campaign for open data Think back: Before Yo, before the cloud, before ubiquitous mobile connectivity, you first interacted with the Internet in your desktop browser. Sir Tim Berners-Lee and others who built the first database of linked information that later became the web haven’t stopped thinking about those early days, and how we can defend the open culture the Internet had then. For Berners-Lee (Watch: Tim Berners-Lee: A Magna Carta for the web) we have to be more than passive consumers: “We can’t just use the web; we have to worry about the underlying structure of the whole thing,” he says in his 2014 talk. That’s why Berners-Lee is focusing on a network of open, linked data. To find out more, explore 12 resources provided by the computer scientist. 1. data.gov.uk

None of us is free until all of us are free Inequality has been a big theme in the U.S. of late. The stats are still stark. Incarceration rates among African Americans are astronomical — 1 in 3 black men will go to prison in their lifetime. Gay marriages may be taking place across the country, but hate crimes and workplace discomfort are still very real concerns. Women still face threats of violence and lower earnings because of their gender. From the comments: Where augmented reality is heading NASA analyst and community member Yuri Gawdiak wrote this in response to Chris Kluwe’s TED Talk, How augmented reality will change sports … and build empathy: “Great talk showing actual examples from what the technology evolution has pointed to for quite some time. Not only will one be able to walk around a field during a football game from any/every player angle but you’ll start to be able to do this for ballets, symphonies, plays, and eventually movies. Very cool.” — Yuri Gawdiak We’re always on the lookout for sharp critique, thought-provoking questions or interesting insights in response to TED Talks.

Guess which country does the most good for the planet? The top ten countries in the Good Country Index. (Click to view at larger size.) Irish people, rejoice! It turns out, your green land is the “goodest” country in the world. That’s right. Can augmented reality enhance our sense of empathy? In Chris Kluwe’s TED Talk, the former NFL punter shares his excitement that augmented reality will soon be everywhere. He focuses on the role it will play in sports, particularly for fans who want to experience the action in the shoes of their favorite players. That’ll be very profitable for the sports entertainment industry — but is that all it’s good for? Toward the end of his talk Kluwe makes a call for a grander application of the technology: more empathy.

Why an Internet “slow lane” is a terrible idea All eyes are on the Federal Communications Commission, as commissioner Tom Wheeler unveiled the FCC’s plan for “Protecting and Promoting the Open Internet.” The plan has had many Internet-centric companies up in arms, decrying any plan that might create a two-tiered Internet comprising “fast lanes” for companies that can pay, and “slow lanes” for those that don’t. (See an open letter to the FCC signed by companies including Amazon, Google and Microsoft.) It’s a complicated topic that involves regulation, politicking and jargon, so we called on technology writer and observer Clay Shirky to share his take on what’s going on. An edited version of our conversation follows.

How to turn small talk into smart conversation Imagine almost any situation where two or more people are gathered—a wedding reception, a job interview, two off-duty cops hanging out in a Jacuzzi. What do these situations have in common? Almost all of them involve people trying to talk with each other. But in these very moments where a conversation would enhance an encounter, we often fall short. 6 thinkers whose depressing ideas will make you feel better We are absurdly anxious about success, says popular philosopher Alain de Botton (TED Talk: Alain de Botton: A kinder, gentler philosophy of success). In his talk from 2009, he suggests that many of our modern values — like our sense of limitless possibility and upward growth — can actually lead us to stress harder about how well we’re doing. But the reverse can also be true, says de Botton. For TED, he’s put together this reading list of (mainly) pessimistic philosophers who have inspired his thinking about positivity.

The price of being single Bella DePaulo, now in her sixties, has always been single. For some time, she thought the marriage bug would bite her, until she realized it wouldn’t—and she didn’t want it to. DePaulo, who describes herself as “single at heart,” relishes the lifestyle. What she doesn’t love is the prejudice that single people face, from cultural stigma to discrimination at work, in the media and elsewhere. 6 reasons to be on Apple’s side in its fight against the FBI Stocksy By now, you probably know that in mid-February, the FBI asked Apple to create software that could bypass encryption on an iPhone relevant to the San Bernardino mass shooting. Apple wrote a letter to customers explaining why they would not. What you might not know is why this matters to you — and to everyone.

11 must-see TED-Ed lessons Short animated lessons you’ll love, from atomic structure to the science of stage fright (and how to overcome it). Bite-size snacks of knowledge, TED-Ed Video Lessons are short, free educational videos written by educators and students, then animated by some of the most creative minds in the business. The topics of these addictive little videos range from quantum physics to the art of beatboxing, and once you watch one, you may want to watch 10 more. Know an animator or educator who could make a great TED-Ed Lesson? Nominate them here.

Teachers need to bring technology into their classrooms, yet they are often puzzled on how to proceed. Laura Moorhead shares eight touchstones that every teacher should take into consideration before infusing technology into teaching. by dt4lt Oct 5