Home of Rachel Parent, GMO Educator and Activist - Raising awareness about the risks of genetically modified organisms in our food and the need for GMO Labeling 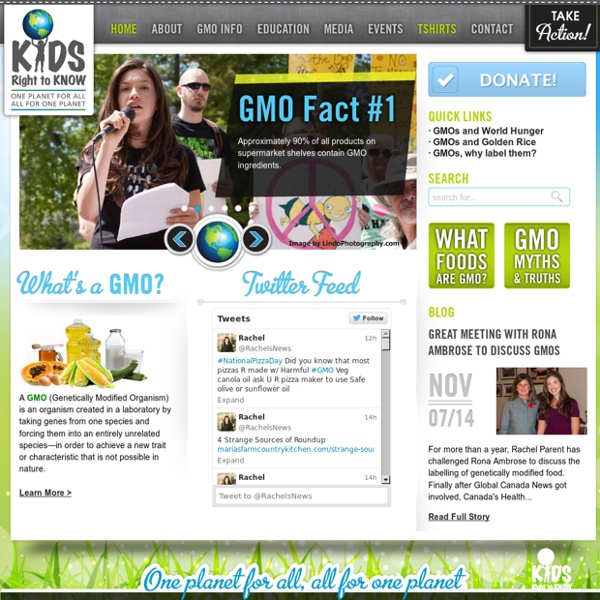 Teen activist Rachel Parent set to debate health minister on GMO labelling An Ontario teenager who held her own in a debate with CBC’s Kevin O’Leary about GMO labelling will have her voice heard in Ottawa. Rachel Parent, 15, will meet with Health Minister Rona Ambrose later this month to discuss her goal of having all genetically modified foods clearly identified. "It’s super exciting," Parent told Yahoo Canada News in an interview last week. "I want to talk to her about GMOs not being proven safe and that we need long-term, independent studies to determine their safety. "And finally, I’d really like to talk to her about the fact that until it’s proven safe, we should at least label them so we have the freedom to choose [what we eat]." Genetically modified organisms are crops or animals that have had their genes altered with DNA from different living species, so that they become resistant to disease or tolerant of pesticides. According to a U.S. Parent and other opponents argue that the technology hasn't been proven to be safe and therefore should be labelled.

Food maker sued by Florida mom over Goldfish "natural" label FORT LAUDERDALE, Fla. — If you have bought Cheddar Goldfish snacks in the past four years, one fed-up Florida mom wants to help you get your money back. And she has put South Florida at the center of a national debate over genetically modified foods. Those are foods that have been changed in a lab. Palm Beach County schoolteacher Lisa Leo has taken Pepperidge Farm to court for false advertising. Her lawsuit was filed June 11 in federal court. A Consumer's Right To Know Shoppers "have a right to know what they’re putting in their bodies,” said Joshua Eggnatz. Genetically modified organisms, or GMOs, are plant or animal products. About 90 percent of the corn, cotton, soybeans and sugar beets grown in the United States are genetically altered. The Food and Drug Administration (FDA) has not defined what “natural” means on food labels. According to the lawsuit, Leo purchased the snacks monthly from three stores. GMO Foods Under Fire Pepperidge Farm officials did not return calls for a comment.

Food labels may get more complicated Voters in two states will decide if people will get to learn what is deep inside their food. On Nov. 4, citizens in Oregon and Colorado will vote on whether companies must tell buyers, on the package, when food has been genetically changed in any way. The proposed laws call for labeling those foods. GMO stands for genetically modified organism. A GMO is any plant or animal whose genes have been changed in a lab. Companies genetically modify crops or food livestock with genes from other species to give them certain qualities. People who oppose GMOs say they are not safe. Lots Of Worry Over GMOs Oregon and Colorado could become the first to pass a referendum calling for GMO labeling. So far, food companies in favor of GMOs have been successful in fighting label laws. Supporters of GMO food labels argue that people have a right to know what's in their food. Scientists largely say the fear that GMOs are dangerous is not true. No Nutrition Information? Thomas M. Ice Cream Gets Into The Act

GMO Facts What are GMOs? GMOs (or “genetically modified organisms”) are living organisms whose genetic material has been artificially manipulated in a laboratory through genetic engineering, or GE. This relatively new science creates unstable combinations of plant, animal, bacteria and viral genes that do not occur in nature or through traditional crossbreeding methods. Virtually all commercial GMOs are engineered to withstand direct application of herbicide and/or to produce an insecticide. Meanwhile, a growing body of evidence connects GMOs with health problems, environmental damage and violation of farmers’ and consumers’ rights. Are GMOs safe? Are GMOs labeled? Where does the Non-GMO Project come in? Do Americans want non-GMO foods and supplements? How common are GMOs? Why does the Non-GMO Project verify products that have a low risk of containing GMOs? Contamination incidents have occurred with seemingly “low-risk” products (rice, starling corn, flax). How do GMOs affect farmers?

Red-tailed Hawk Basic Facts and Photos - Oklahoma Birds and Butterflies Red-tailed Hawk Basic Facts and Photos by Charly Mann The average red-tailed hawk lives twenty years in the wild. Its eyesight is eight times more powerful than a human’s. Like the song Oklahoma says these birds do "make lazy circles in the sky." They usually weigh between 3 and 5 pounds. Red-tailed hawks are great at reducing rat populations. These birds are classified as raptors. The Red-tailed hawk is very intelligent and is one of the easier raptors to tame. The female (hen) Red-tailed Hawk is the most desirable in falconry because of its larger size, which allows it to take medium sized animals including ducks and pheasant. photos by Kathryn Mann Tweet

Meet Rachel Parent — the teen fighting for GMO labelling in Canada Watch: Rachel Parent is a 15-year-old activist. Her goal: mandatory labelling in Canada of all genetically modified organisms, or GMOs that are found as ingredients in food. Allison Vuchnich has part one of a four-part series on GMOs and labelling. UPDATE: Rachel Parent has met with Health Minister Rona Ambrose. Standing in the grocery store aisle surrounded by processed and packaged food, examining ingredients and scanning labels: this is shopping with Rachel Parent, and it is a thorough process. “About 70 per cent of the (processed) food on all our grocery store shelves is genetically modified or has GMO ingredients in it,” Parent told Global News as she reached for a container of relish and examined its ingredient list. So for instance, glucose fructose is a derivative from corn and it’s high-fructose corn syrup basically, so there really is a 90 per cent chance that it is GMO,” she said. “Of course, I would never know unless it was labelled.” Parent is a 15-year-old activist.