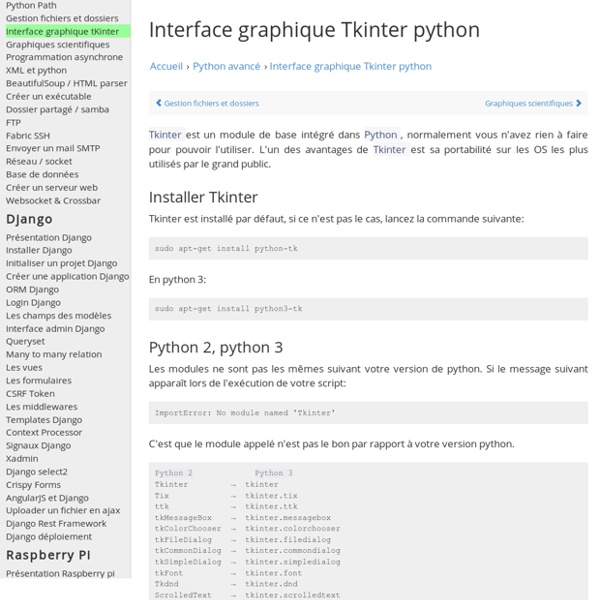 The Tkinter Canvas Widget The Canvas widget provides structured graphics facilities for Tkinter. This is a highly versatile widget which can be used to draw graphs and plots, create graphics editors, and implement various kinds of custom widgets. When to use the Canvas Widget The canvas is a general purpose widget, which is typically used to display and edit graphs and other drawings. Another common use for this widget is to implement various kinds of custom widgets. For example, you can use a canvas as a completion bar, by drawing and updating a rectangle on the canvas.

Style Guide for Python Code This document gives coding conventions for the Python code comprising the standard library in the main Python distribution. Please see the companion informational PEP describing style guidelines for the C code in the C implementation of Python [1]. This document and PEP 257 (Docstring Conventions) were adapted from Guido's original Python Style Guide essay, with some additions from Barry's style guide [2]. This style guide evolves over time as additional conventions are identified and past conventions are rendered obsolete by changes in the language itself. Many projects have their own coding style guidelines. In the event of any conflicts, such project-specific guides take precedence for that project.

Comprehensive Guide on Hydra - A Brute Forcing Tool Hello friends!! Today we are going to discuss – How much impactful hydra is in cracking login credential of various protocols to make unauthorized access to a system remotely. In this article we have discussed each option available in hydra to make brute force attack in various scenario. docx 0.2.4 Extracting Text from a Document If you just want to extract the text from a Word file, run: example-extracttext.py 'Some word file.docx' 'new file.txt' Ideas & To Do List Further improvements to image handlingDocument health checksEggMarkdown conversion support

What’s the Real History of Black Friday? The first recorded use of the term “Black Friday” was applied not to holiday shopping but to financial crisis: specifically, the crash of the U.S. gold market on September 24, 1869. Two notoriously ruthless Wall Street financiers, Jay Gould and Jim Fisk, worked together to buy up as much as they could of the nation’s gold, hoping to drive the price sky-high and sell it for astonishing profits. On that Friday in September, the conspiracy finally unraveled, sending the stock market into free-fall and bankrupting everyone from Wall Street barons to farmers. The most commonly repeated story behind the post-Thanksgiving shopping-related Black Friday tradition links it to retailers. As the story goes, after an entire year of operating at a loss (“in the red”) stores would supposedly earn a profit (“went into the black”) on the day after Thanksgiving, because holiday shoppers blew so much money on discounted merchandise.

Touch Gesture Reference GuideGo! The Touch Gesture Reference Guide is a unique set of resources for software designers and developers working on touch-based user interfaces. The guide contains: 1) an overview of the core gestures used for most touch commands 2) how to utilize these gestures to support major user actions 3) visual representations of each gesture to use in design documentation and deliverables 4) an outline of how popular software platforms support core touch gestures (below). Download numpy.linspace — NumPy v1.10 Manual start : scalar The starting value of the sequence. stop : scalar The end value of the sequence, unless endpoint is set to False. Installing packages — SciPy.org These are general instructions for installing packages in the SciPy ecosystem. Scientific Python distributions For many users, especially on Windows, the easiest way to begin is to download one of these Python distributions, which include all the key packages: Anaconda: A free distribution of Python with scientific packages.

XlsxWriter 1.0.2 A Python module for creating Excel XLSX files. XlsxWriter is a Python module for writing files in the Excel 2007+ XLSX file format. XlsxWriter can be used to write text, numbers, formulas and hyperlinks to multiple worksheets and it supports features such as formatting and many more, including: Black Friday Crowds: The Psychology Behind the Shopping Day It’s no coincidence that horror director George Romero’s 1978 zombie flick, Dawn of the Dead, culminates in a mall, with legions of zombies drawn to the place to gorge mindlessly. If the undead were craving bargains rather than human brains, it could have been just any old Black Friday—a hellscape like none other, in the minds of many shoppers and nonshoppers alike. Agitated crowds.

24 Free Node.js Tutorials & Online Guides JavaScript was original created as a frontend language for dynamic website effects. Although it’s still used in this way, newer libraries are pushing the boundaries of what can be accomplished through JS scripting. In a previous article I covered AngularJS resources for building dynamic web applications. Node.js is a similar open source library with even more detailed features. This gallery includes 24 tutorials, guides, and websites dedicated to teaching Node.js. These resources are perfect for any developer who wants to learn more about Node, or a newcomer who just wants to see what all the fuss is about.

Python 3 tutorial Python is a general-purpose interpreted, interactive, object-oriented, and high-level programming language. It was created by Guido van Rossum during 1985- 1990. Like Perl, Python source code is also available under the GNU General Public License (GPL). Tk window and button – Python Tutorial Tk button with onClick event To create a Tkinter window with a button use the example below. The program enters mainloop() which wait for events (user actions). We define the button which has a callback to the function callback(). master is the root window, the window where your button will appear in. Related coursePython Desktop Apps with Tkinter Tk image button If you want an image button, use the PhotoImage class.