1 Song On Your Birthday 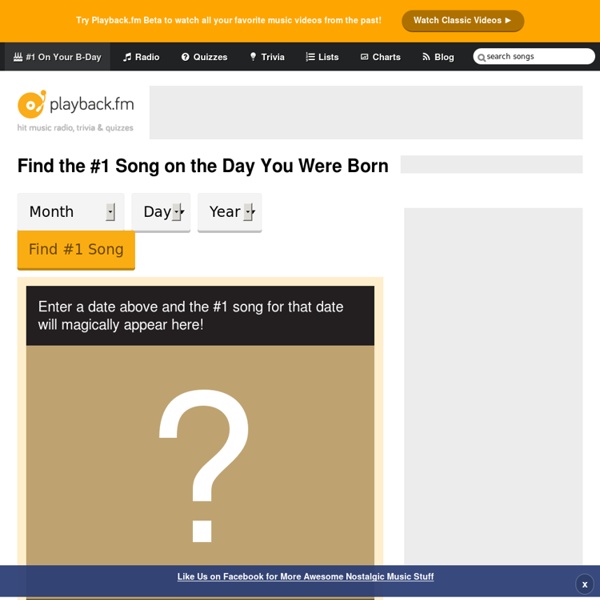 A Year Ago, The European Supreme Court Appears To Have Ruled The Whole Web To Be In The Public Domain, And Nobody Noticed - Falkvinge on Infopolicy Copyright Monopoly – Rick Falkvinge On February 13, 2014, the European Court of Justice – the Supreme Court of the European Union – appears to have ruled that anything published on the web may be re-published freely by anybody else. The case concerned linking, but the court went beyond linking in its ruling. This case has not really been noticed, nor have its effects been absorbed by the community at large. It was a little-known ruling about hyperlinking. To Err is Human: Typos in Literature on AbeBooks The Good Earth Pearl S. Buck The first through third printings contain an error on line 17 of page 100 - "flees" should read "fleas". Most readers find typographical errors to be one of life's little annoyances, like being stuck at a traffic light when in a hurry. For others, the publishing of a spelling or grammatical error is one of the most grievous mistakes imaginable. I personally enjoy a particularly silly error, and if it's done right, see it as a value-added perk to a book.

15 Most Popular First Dance Wedding Songs - Summer 2016 When it comes to planning their big day, millennial couples are straying from tradition and making their own rules. New wedding trends like honeymoon funds and mismatched bridesmaids dresses are all the rage, but there's one one wedding tradition that will never go out of style: the first dance. And even though there's a seemingly endless amount of love songs to choose from, there are certain tunes that perennially capture the hearts of couples across the country. Music-streaming service Spotify recently released its list of Top 50 First Dance Songs and, not surprisingly, tracks from Ed Sheeran, Lonestar, and Elvis Presley ranked high. The list is full of wildly romantic songs, both old and new. Here are 15 of the most popular tracks you'll hear at weddings this summer:

Jazz Music By the Decade Jazz has always had an undeniable impact on culture, yet a tumultuous relationship with popular music. At one point in the middle of the 20th century, the genre was at the forefront. It had pop stars. Miles Davis, with his constant, sometimes puzzling musical innovation and penchant for performing with his back to the crowd, was the genre’s Kanye West. Amazon Cloud Drive's unlimited storage plans undercut rivals Amazon Cloud Drive is taking the “bang for your buck” throne away from Microsoft with new unlimited cloud storage plans. Amazon's unlimited plan costs $59.99 per year for all file types. A separate photo-only plan costs just $11.99 per year, and includes an additional 5 GB for other files. Both plans come with a three-month free trial. How Bob Dylan Made Rock History on 'Highway 61 Revisited' - Rolling Stone Bob Dylan's second album of 1965, Highway 61 Revisited, would be a historic break: For the first time, none of the tracks would feature just him and his guitar. On May 10th, Dylan finished the brief tour of England – eight all-acoustic shows – chronicled in D.A. Pennebaker's documentary Don't Look Back. By now, he was bored playing his old songs as he'd recorded them.

4 keys to success for LibreOffice as a service The announcement of LibreOffice Online this week came as welcome news to many people concerned about the paucity of online options for those who want software freedom with their online document solutions. But can open source SaaS succeed? The open source community needs a truly open alternative to current mainstream online document collaboration solutions, all of which are compromised by lock-in. LibreOffice Online will offer the full flexibility to deploy in-house or hosted cloud instances while using true open standards for its documents. Moreover, the rich capabilities of LibreOffice -- which include support for the enterprise content management interface CMIS and cloud storage -- mean the offering can rapidly mature and adapt to changing enterprise conditions. Contributions will be needed to package the software for various delivery formats, but there’s a good chance the work will attract multiple contributors wanting to escape the tentacles of Microsoft and Google.