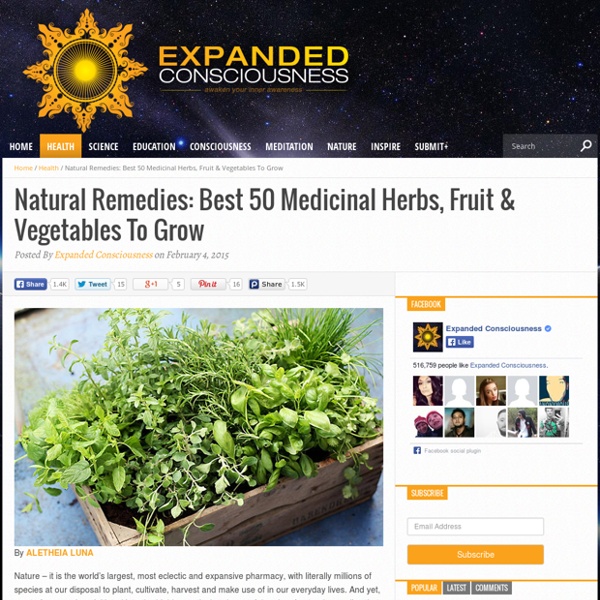 By ALETHEIA LUNA Nature – it is the world’s largest, most eclectic and expansive pharmacy, with literally millions of species at our disposal to plant, cultivate, harvest and make use of in our everyday lives. And yet, most of us remain uninitiated into the highly practical and powerful realm of natural remedies that Nature herself offers to us with open hands. While most of us grew up disconnected from the natural world, it is never too late for us to discover the endless sources of natural remedies hidden all throughout nature – and make use of them ourselves. Whatever your personal context, natural remedies can be grown almost anywhere or in anything, from large paddocks and small patches of ground, to pots and window boxes. Healing plants of all varieties can also be bought at local nurseries, swap meetups, garage sales, online stores, or even foraged in the wild and transplanted into your own garden. 50 Best Natural Remedies Plant List 1. Genus: Flowering plant. 2. 3. 4. Genus: Herb.

Oregano - TruthWiki The warm, balsamic and aromatic flavor of oregano makes it the perfect addition to Mediterranean and Mexican cuisines. This popular herb whose name means “mountain joy” is available throughout the year. Oregano is known botanically as Origanum vulgare and is called wild marjoram in many parts of Europe since it is closely related to the herb that we know as sweet marjoram. Hemp: Uses and Cures... Ghee and Herbal Extract Recipes Included! By Yolanda Bertaud Guest Writer for Wake Up World Hemp, Cannabis sativa, is one of the world’s oldest sources of food and medicine, with a history that dates back at least ten thousand years. It relieves glaucoma, epilepsy, migraines, insomnia, asthma, the nausea associated with AIDS and chemotherapy, and a host of other conditions. It was once a staple in every American medicine cabinet, but because hemp is the plant from which marijuana is derived, it has been made unavailable to consumers until recently.

Top 10 Medicinal Plants You Can Grow Yourself Finding a cure for your health problems by using natural remedies goes way back in history and people have been using natural remedies since the beginning of time. Of course, in order for these remedies to be efficient you should know something about each plant that can help you feel better. Once you have this basic information, you can decide which of these plants you should grow in your garden and start planting. To give you a few examples basil, marigolds and thyme are among these “miracle” plants, but you will find a long list if you do a bit of research. To help you get started and become an expert in medicinal plants, start by planting some from the next link.

Natural Plant Bandages are Antibacterial and Better than Store Bought Photo credit: bigstock.com Many people don’t realize that Mother Nature provided us with common herbs, fruits, and plants that have their own antibacterial compounds to fight bacteria and other pathogens. Did you think that man created antibiotics? How to Treat Migraines with an Herbal Tincture at Home ~ A Recipe Lemon balm (Melissa officinalis) abounds in my garden! It is one of the most easy to grow medicinal herbs and has some pretty amazing healing properties…making it a great addition to the home pharmacy. Historically, lemon balm has been used to treat all kinds of nervous system ailments and is known for it’s ability to: calm an irritable child.act as an antiviral in treating cold sores due to the herpes virus.heal wounds and protect the skin.treat the symptoms of the common cold and flu when combined with other medicinal herbs.relieve the symptoms of migraine headaches, anxiety, depression, and insomnia. Likewise, feverfew is unbeatable when it comes to treating the common headache, migraines, stress/tension headaches, and those headaches associated with PMS symptoms. It truly is a wonder herb and a must in the garden of those who suffer these ailments.

Remote Amazonian Healers compile a 500-page traditional medicine encyclopedia Before the advent of written language, a tribe’s knowledge had to be passed down orally for the continuation of information. An elder was considered an encyclopedia of remedies, for the body, mind and soul. Midwives kept detailed mental histories of the complete lineage of every person in the village. Births and deaths were a time of remembering these lineages, which remained intact through the telling of the members’ life stories. Historical stories told repeatedly recalled the origins of each tribe and the stories held the tribe in threads of belonging.

The Top 8 Cooling Spices for Summer 12th August 2015 By Dr. Edward Group Guest Writer for Wake Up World To keep the body cool during the summer months, ancient Indian medicine (Ayurveda) recommends consuming spices that promote cooling. Spices are one of the most potent plant foods in terms of antioxidants and bioactive compounds, and according to Ayruveda’s 5,000 year old food philosophy, there are plenty of everyday spices that can even help cool the body when outside temperatures become unbearable. VIDEO: Amazing Cure Of Terminal Breast Cancer With Turkey Tail Fungus VIDEO: Amazing Cure Of Terminal Breast Cancer With Turkey Tail Fungus Paul Stamets is one of the world’s foremost experts on fungi and his astonishing work is so groundbreaking that he has even been called “a man who could actually save the world”. In addition to discovering diverse applications for fungi including the cleanup of radioactive contamination, he is also involved in two NIH-funded clinical studies on cancer and HIV treatments using mushrooms as adjunct therapies. In 2009, Paul’s 84 year old mother was given less than 3 months to live after her breast cancer metastasized (spread) throughout her body. Her doctor said it was one of the most severe cases she had ever seen in 20 years of practice. After radiation treatment and mastectomy were ruled out, doctors said there was nothing else they could do for her and that she should prepare for the end.

Flowers Used in Chinese Herbal Medicine 25th October 2015 By Dr. Joseph Mercola Guest Writer for Wake Up World Health Benefits of Celery Celery is an alimentary herb as well as a special medicinal plant. Celery leaves are used for spicing up foods and drinks such as cocktails. The volatile oil extracted from this vegetable can be used for medicinal purposes as well as an ingredient for various perfumes. Description of Celery herb Usually, celery (Apium graveolens) is used in making salads, spicing up foods containing meat, etc. Tractatus de Herbis, a medieval medicinal plant guide - Aleph The Tractatus de Herbis manuscript is a botanical album made around the year 1440 in Lombardy, Italy. It was created to help apothecaries and physicists with different linguistic skills to identify plants in their daily trade. The drawings, made with simplicity and looseness, sometimes take up an entire page and reveal the keys of the Mediterranean pharmacopeia of the Middle Ages. Although this particular book, known also as Sloan 4016 (its name in the British Library’s catalogue), is traditionally identified as a copy of Manfredus’ famous medicinal plant treatise, which itself was a version of the code known as Egerton 747, does not contain any of the original writing, only its images. The main question raised by this manifest is why its author decided to abandon Tractatus’ original text and instead gave birth to a new genre.

Herbal birth control, sterility promoters, implantation preventers, menstrual promoters, emmenagogues, uterine contractors, abortifacient www.susunweed.comPlease ask for permission to use this article, write to us at susunweed@herbshealing.com Note: Ab*rtion is a controversial subject, and herbal ab*rtions are not an easy solution to the issues involved. Any ab*rtion is physically, emotionally, and psychically stressful. If you decide that you are not going to nourish a life growing within, please seek a woman wise in the ways of bodies and feelings to help you. c. 2002 Susun S Weed Excerpt from Wise Woman Herbal for the Childbearing Year pages 5 -14Herbal birth control is most effective when combined with knowledge of your fertility cycles, selective abstinence, mental control, and barriers to sperm.