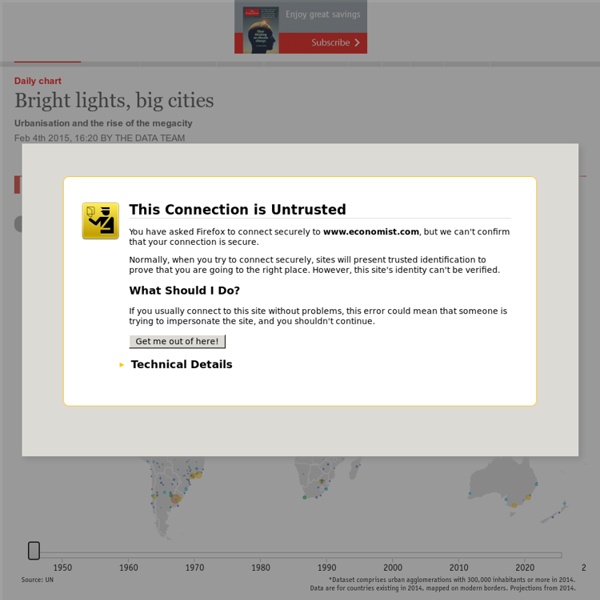 AT THE beginning of February, somewhere in London, a maternity ward welcomed the city's 8,615,246th inhabitant. The mayor of London reckons that the British capital has now surpassed its previous population peak set in 1939. But if it occasionally feels cramped on the Tube, the task for other city planners around the world looks far more daunting. Nearly 9% of the world's population will be living in just 41 megacities (those with more than 10m inhabitants) by 2030. Our interactive map above tracks global city population shifts and forecasts over time.

33 Maps That Explain The United States Better Than Any Textbook Racial Segregation In Chicago While government-mandated racial segregation ended in the 1960s, de facto residential segregation has sprung up in its wake. The above map of Chicago's white, black, Asian and Latino populations visualizes just how insulated groups continue to be from each other. United States Census Blocks With No Populations While the green tones collecting in the Western half of the US might inspire a misanthrope to make a move to Utah, beware: most of the uninhabited areas in this map are only that way due to natural features that make it difficult to live there or because human settlement is prohibited there (think national parks). A Map Of Light Pollution In The United States The east coast of America suffers from some of the worst light pollution in the planet, depicted in the heat map above of light pollution in the continental US. The Happiest States In The United States America Visualized By Distance To The Nearest McDonald's The Fourth Congressional District Of Illinois

Hoyt 1939 and Harris 1945 Source: adapted from H. Carter (1995) The Study of Urban Geography, Fourth Edition, London: Arnold, p. 126. A study of residential areas done by Hoyt (1939) in the North American context concluded that the land use pattern was not a random distribution, nor sharply defined rectangular areas or concentric circles, but rather sectors. Thus, the effect of direction and time was added to the effect of distance. Transport corridors, such as rail lines, public transit and major roads, are mainly responsible for the creation of sectors, thus transport has directional effect on land uses. Following Hoyt's development of a sectorial city, Harris and Ullman (1945) introduced a more effective generalization of urban land uses. Differential accessibility. Harris and Ullman poly-nuclear model was the first to represent the fragmentation of urban areas, specialized functions as well as suburbanization.

Interactive: How Americans Get to Work JavaScript required for interaction.<br /><img src=" The way that people get around can say a lot about how a place is made up. In the city I grew up, most people drive to where they need to go in under 15 minutes. Medium population, most work in town, and eating out meant somewhere local. Then I went to college in Berkeley, and it was more common to ride the bus or the BART — and I'm sure being surrounded by poor college students who didn't own cars had nothing to do with that. Then it was off to Los Angeles where it's either drive or take horribly inefficient public transportation. In New York, it was all about the subway and occasional taxi. As for the midwest, sorry I don't know you very well, but maybe one day. With estimates from the United States Census Bureau's 2013 American Community Survey, we gain a little bit of an idea of what it's like across the country. However, there are a few exceptions.