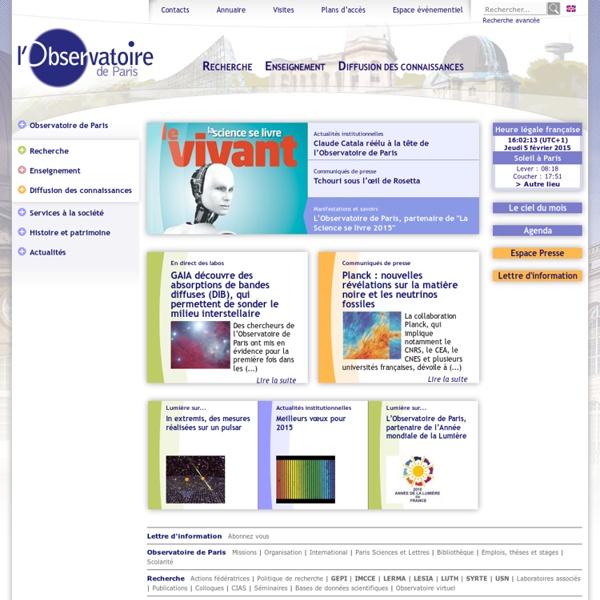 Dyson Spheres: The Ultimate Energy Shell Game The world’s exponential population growth will soon need to flatten out otherwise within a few hundred years every square foot of the Earth’s surface will be taken up by a human. (Which reminds me of one of my favorite bumper stickers from a space advocacy group in the 1970s that read: “American Needs Space to Grow.”) With this population growth, mankind’s hunger for energy has also increased exponentially. And if this continues, we will soon consume more energy than the Earth receives from the sun. Should they exist, this could be a common problem faced by burgeoning civilizations across the galaxy.

Seeing Equinoxes and Solstices from Space acquired December 21, 2010 - September 20, 2011 acquired December 21, 2010download large winter solstice image (1 MB, JPEG, 3712x3712) acquired March 20, 2011download large spring equinox image (1 MB, JPEG, 3712x3712) What our civilization needs is a billion-year plan Artist’s concept of a Kardashev Type 2 civilization (credit: Chris Cold) Lt Col Garretson — one of the USAF’s most farsighted and original thinkers — has been at the forefront of USAF strategy on the long-term future in projects such as Blue Horizons (on KurzweilAI — see video), Energy Horizons, Space Solar Power, the AF Futures Game, the USAF Strategic Environmental Assessment, and the USAF RPA Flight Plan. Now in this exclusive to KurzweilAI, he pushes the boundary of long-term thinking about humanity’s survival out to the edge … and beyond. — Ed. The views expressed are those of the author and do not necessarily reflect the official policy or position of the Department of the Air Force or the U.S. government. It isn’t enough just to plan for two or 20, or even the fabled Chinese 100 year periods. We need to be thinking and planning on the order of billions of years.

The Gateway to Astronaut Photography of Earth From Night to Day to Night Again This video was taken by the crew of Expedition 34 on board the International Space Station. The sequence of shots was taken on January 3, 2013 from 11:43:46 to 15:49:31 GMT, on a pass from northwestern Australia, making two complete orbits to eastern Quebec, near the Gulf of St. Lawrence. Kepler's Exoplanets Visualized Super-Earths? Hot-Jupiters? Habitable zones, sun-like stars, Earth-like planets? What does it all mean? Sure, we all have a grasp as to what it would mean if astronomers found an exoplanet roughly the same size as the Earth, orbiting within the “Goldilocks Zone” of its parent star — i.e., it’s not too hot or too cold for liquid water to exist on the surface. When one of those bad boys are discovered, the next question would be: “Where’s the life?”

Exploring Saturn and the scale of the solar system - video Planetary scientist Sheila Kanani takes us on a visual tour of Saturn and its many moons. When Galileo first looked at Saturn he thought it was a very strange object, but wasn't entirely sure what to make of it. About 400 years later, in 1997, Nasa sent a spacecraft, called Cassini, to Saturn, allowing us to see the planet as we'd never seen it before. Unlike the rocky inner planets of our solar system, Saturn is a gassy giant, with spectacular rings – made mostly of ice.

Exoplanet Atlas full of errors – VisualJournalism When you do graphics for print in Wired – and then post on your blog about the process – stressing how much attention you pay to the details, then you’re asking for it. Sorry, David McCandless … (Click the graphic for full-size at Wired and read the blogpost at information is beautiful here) Your Exoplanet Atlas is full of errors.

Stellar engine Stellar engines are a class of hypothetical megastructures which use a star's radiation to create usable energy. Some variants use this energy to produce thrust, and thus accelerate a star, and anything orbiting it, in a given direction. The creation of such a system would make its builders a Type-II civilization on the Kardashev scale. There are three variant classes of this idea. Predicting what extra-terrestrials will be like: and preparing for the worst 1. Introduction ‘Astrobiology is the study of things that do not exist.’ This well-known statement can be dismissed as flippant cynicism, but one might suggest that in its vernacular way it is struggling to grasp what on earth (so to speak) we might expect to find. Largest-Ever Simulation of the Universe Revealed Back in 1970, Jim Peebles at Princeton University carried out a ground-breaking experiment. He used the new-fangled technology of computing to simulate the behaviour of a cluster of galaxies under the force of gravity. This simulation was tiny by modern standards: it involved just 300 ‘particles’. But it showed that computer models could give an important insight into the formation of structures on a grand scale. It’s fair to say that this and other early simulations revolutionised cosmology. Today, Juhan Kim at the Korea Institute for Advanced Study in Seoul, and a few pals, show just how far this technique has come.