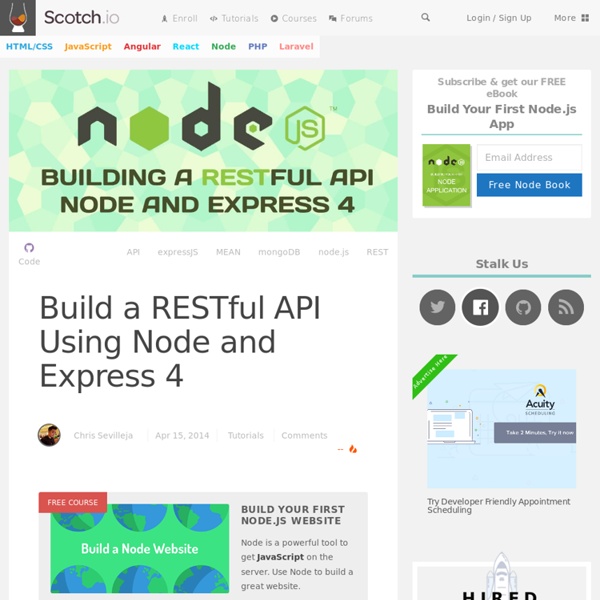 # Express Router and Routes We will use an instance of the Express Router to handle all of our routes. Here is an overview of the routes we will require, what they will do, and the HTTP Verb used to access it. This will cover the basic routes needed for an API. # Route Middleware We’ve already defined our first route and seen it in action. Let’s say that we wanted something to happen every time a request was sent to our API. All we needed to do to declare that middleware was to use router.use(function()). We are sending back information as JSON data. We will also add next() to indicate to our application that it should continue to the other routes. Middleware Uses Using middleware like this can be very powerful. Testing Our Middleware Now when we send a request to our application using Postman, Something is happening will be logged to our Node console (the command line). With middleware, we can do awesome things to requests coming into our API. # Creating the Basic Routes Related:  Node • Volkeno • Node

Web App + REST API with Express, PostgreSQL and Nunjucks on Yarn In this article I'll show you how to create a basic web application in Node from scratch. I'll be using yarn instead of npm. I issue HTTP requests using httpie instead of curl. Let's start with an empty directory: cd myapp $ yarn init Install express yarn add express Inside index.js, add first (root) route which renders a simple text: const express = require(‘express’) const app = express(); app.get('/', (req, res) => { res.send('Hello World') }) app.listen(3000, () => { console.log('listening on 3000') }) Auto-reloading Install nodemon to restart the server when there is a change yarn add nodemon --dev --dev as Nodemon is used only for development. You can run it by hand . or directly with yarn (as it detects binaries) yarn run nodemon or you can put it into package.json (for later customization) and to be run as yarn run dev HTML view Create index.html in the root of the project: <! Add path dependency at the top of index.js: const path = require('path') Add new route, let’s call it /html Request logger

RESTful API User Authentication with Node.js and AngularJS In this second part of our User Authentication series I will show you how to hook up a frontend to our REST API backend. We will craft a little Ionic app with AngularJS, but the code and concept is almost the same for a pure AngularJS webapp. If you came directly to this post, make sure to follow the first step or have some kind of backend already in place! RESTful API User Authentication with Node.js and AngularJS – Part 1/2: Server This part will cover a lot of code including HTML templates, so if you want it the lazy way grab your code below, but make sure to follow the article to understand what we do! Creating the basic app First of all we start (as always) with a blank Ionic app, so go ahead and run: Start a blank Ionic Project We will have quite some files, so create all these folders and files under www: Last thing for now is to include all the javascript files in our index.html so open the file and append right at the end of the header: Crafting our views Ready for some code? Next?

Error Handling Share: Error handling is a pain, and it's easy to get by for a long time in Node.js without dealing with many errors correctly. But building robust Node.js apps requires dealing properly with errors, and it's not hard to learn how. This document will answer several questions that programmers new to Node.js often ask: In functions that I write, when should I throw an error, and when should I emit it with a callback, event emitter, or something else? This document is divided into several parts that build on one another: Background This document assumes: You're familiar with the idea of exceptions in JavaScript, Java, Python, C++, or any similar language, and that you know what it means to throw and catch them.You're familiar with programming in Node.js. function myApiFunc(callback) { /* * This pattern does NOT work! does not work to handle errors. You should also be familiar with the three main ways to deliver an error in Node.js: We'll discuss when to use each of these patterns below. 1. 2. 3.

RESTful API User Authentication with Node.js and AngularJS My all time most viewed article is How To Handle User Authentication With AngularJS Inside Your Ionic App, and it’s also the one with the most questions. User authentication is one of the features almost every app(web and mobile) needs today. In this series I will show you my best practice for creating a RESTful API with user authentication. We will craft a little Node.js server which will allow us to sign up, authenticate and afterwards take request for protected endpoints. The second part will be how to build the frontend for such a REST backend. RESTful API User Authentication with Node.js and AngularJS – Part 2/2: Frontend I use Node.js because it’s simple and straightforward, but you could obviously have any framework in the backend you like (or already have). Setting up our little Node.js backend Although I did not think about it, I used the complete MEAN stack for this series. I will come to what’s inside those files later, for now just have the structure ready. Conclusion

generator-mongoose A mongoose schema generator for Yeoman ![Gitter]( Chat.svg) A generator for Yeoman. Getting Started What is Yeoman? Trick question. Basically, he wears a top hat, lives in your computer, and waits for you to tell him what kind of application you wish to create. Not every new computer comes with a Yeoman pre-installed. $ npm install -g yo Generator Mongoose While running through a leafy mongodb field he picked up mongoose. To install generator-mongoose from npm, run: $ npm install -g generator-mongoose Finally, initiate the generator: $ yo mongoose It should output a file structure similiar to: .bowerrc .editorconfig .jshintrc config/ - db.js public/ css/ - style.css js/ - script.js models/ - post.js routes/ - index.js - post.js test/ - test-post.js views/ - index.html bower.json Gruntfile.js package.json Readme.md Run the app Development mode $ grunt or $ grunt server Production mode $ grunt prod Sub Generator Schema Run the sub generator for schemas: output: Getting To Know Yeoman

Build your first Node.js microservice - Max Stoibers Blog A microservice is a single self-contained unit which, together with many others, makes up a large application. By splitting your app into small units every part of it is independently deployable and scalable, can be written by different teams and in different programming languages and can be tested individually. micro is a tiny (~100 LoC) module that makes writing a microservice in Node.js a joy. The Setup There are two tiny steps needed for the setup, first we need to install micro: I’m installing it globally to make sure we get access to the micro command. And second we need to create a file that will contain our microservice. The First Steps Our index.js file needs to export a single function, which micro will pass the incoming request and a response object to: module.exports = function (request, response) { // Your microservice here} The main function we’ll use from micro is send, which allows us to send a response back to the client. Starting our microservice is just one command away:

Creating Desktop Applications With AngularJS and GitHub Electron GitHub’s Electron framework (formerly known as Atom Shell) lets you write cross platform desktop application using HTML, CSS and JavaScript. It’s a variant of io.js run-time which is focused on desktop applications instead of web servers. Electron’s rich native APIs enables us to access native things directly from our pages with JavaScript. This tutorial shows us how to build a desktop application with Angular and Electron. Create a simple Electron applicationUse Visual Studio Code Editor to manage our project and tasksIntegrate an Angular Customer Manager App with ElectronUse Gulp tasks to build our application and create installers Creating Your Electron Application To get started, install Node if you don’t have it in your system already. There are two package.json files in this project. For developmentThe package.json directly inside the project root contains the configurations, dependiencies for your development environment and build scripts. app/package.json might look like this:

Easily Develop Node.js and MongoDB Apps with Mongoose Related Course Build Your First Node.js Website Node is a powerful tool to get JavaScript on the server. Use Node to build a great website. Node.js and MongoDB are a pair made for each other. Being able to use JSON across the board and JavaScript makes development very easy. CRUD is something that is necessary in most every application out there. Today we’ll be looking at code samples to handle CRUD operations in a Node.js, ExpressJS, and MongoDB application. These code samples were used to create a Node.js RESTful API since you are performing CRUD functions when creating an API. # What Is Mongoose? mongoose is an object modeling package for Node that essentially works like an ORM that you would see in other languages (like Eloquent for Laravel). Mongoose allows us to have access to the MongoDB commands for CRUD simply and easily. $ npm install mongoose --save Now that we have the package, we just have to grab it in our project: var mongoose = require('mongoose'); Let’s get to the commands.

Creating a microservice in NodeJs - JavaScript Developer and Blogger Published: Sat Apr 01 2017 In this post I will show how I implemented the commenting feature for my blog using a microservice api. I previously described how I wrote the UI for my commenting feature using Svelte. This article will focus on the backend of my commenting feature. Microservices as a pattern has become a fairly popular choice when architecting application apis. My blog was originally implemented as a single Node/Express application. Not only does this reduce complexity in the original application. My blog is deployed to a low-end tier in Azure, which means I am subject to resource quotas at the application level. When the main application serves a blog post, comments are loaded asynchronously from the new comment api. Implementation The first part is the server itself. server.js Next up is CommentService. CommentService is where I load comments from MongoDB by articleId, and build a recursive tree of comment threads. comment-service.js comment.js

Building Cross-platform Desktop Apps with Electron Earlier this year, Github released Atom-Shell, the core of its famous open-source editor Atom, and renamed it to Electron for the special occasion. Electron, unlike other competitors in the category of Node.js-based desktop applications, brings its own twist to this already well-established market by combining the power of Node.js (io.js until recent releases) with the Chromium Engine to bring us the best of both server and client-side JavaScript. Imagine a world where we could build performant, data-driven, cross-platform desktop applications powered by not only the ever-growing repository of NPM modules, but also the entire Bower registry to fulfill all our client-side needs. Enter Electron. Building Cross-platform Desktop Apps with Electron In this tutorial, we will build a simple password keychain application using Electron, Angular.js and Loki.js, a lightweight and in-memory database with a familiar syntax for MongoDB developers. This tutorial assumes that: Getting the Goods Key points: <!