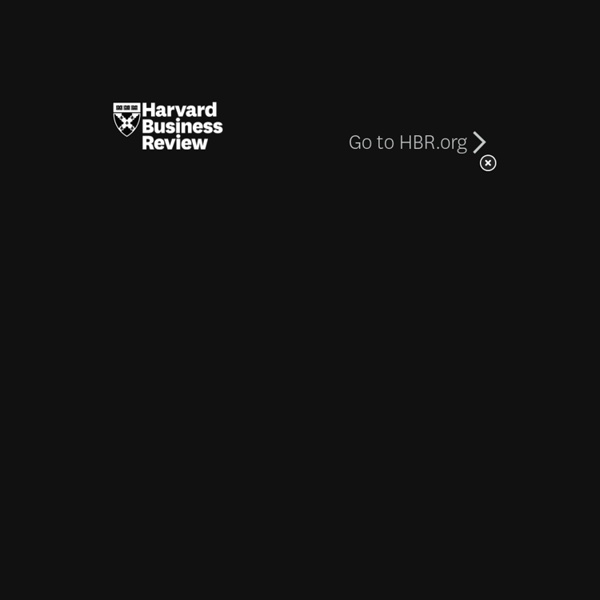 If you’re working in the kitchen of Anthony Bourdain, legendary chef of Brasserie Les Halles, best-selling author, and famed television personality, you don’t dare so much as boil hot water without attending to a ritual that’s essential for any self-respecting chef: mise-en-place. The “Meez,” as professionals call it, translates into “everything in its place.” In practice, it involves studying a recipe, thinking through the tools and equipment you will need, and assembling the ingredients in the right proportion before you begin. It is the planning phase of every meal—the moment when chefs evaluate the totality of what they are trying to achieve and create an action plan for the meal ahead. For the experienced chef, mise-en-place represents more than a quaint practice or a time-saving technique. It’s a state of mind. “Mise-en-place is the religion of all good line cooks,” Bourdain wrote in his runaway bestseller Kitchen Confidential. Most of us do not work in kitchens.

How to Become a Productivity Ninja Believe it or not, productivity can be learned, grasshopper. Yeah, I didn’t believe it either..until I transformed myself into a productivity ninja. Today, I’m going to teach you to maximize your time at your computer, dominate your email in-box, and spend less time on unimportant tasks to focus on what really matters. Once you have freed up your time, you’ll be surprised how you’re able to hang out with friends and family, pick up new skills, spend more time exercising, or cook healthy meals. Like Neo learning Kung Fu, today I shall teach you the skill of productivity.

4 Things You Thought Were True About Time Management - Amy Gallo by Amy Gallo | 1:00 PM July 22, 2014 I don’t know anyone who doesn’t struggle with how to make the most of their time at work. How do you stay on top of an overflowing inbox? Flat And Thin Are In Advertisement In the last several years, we’ve seen a rapid shift in software and app interface design, from 3-D and skeuomorphic to flat and minimal. Although this trend has become nearly ubiquitous, let’s take a moment to consider how we got here and what influence it’s having on interface design as a whole. Additionally, I’ll share some tips and considerations on designing flat interfaces. Interfaces on a Windows Phone 8 and Apple’s iOS 7. What Happened?

How To be so Productive You Can't Stand it You might think that creatives as diverse as Internet entrepreneur Jack Dorsey, industrial design firm Studio 7.5, and bestselling Japanese novelist Haruki Murakami would have little in common. In fact, the tenets that guide how they – and exceptionally productive creatives across the board – make ideas happen are incredibly similar. Here are 10 laws of productivity we’ve consistently observed among serial idea executors:

The Exact Amount Of Time You Should Work Every Day Editor's Note: This is one of the most-read leadership articles of 2014. Click here to see the full list. You know that taking frequent breaks is good for your productivity, focus, and creativity, but you just never seem to get around to it. The Zeigarnik effect: the scientific key to better work - Team Hacks If you, like us, are constantly looking for more efficient ways to work, then you will really appreciate what the Zeigarnik effect has to offer. It carries the name of Bluma Zeigarnik, a Lithuanian-born psychologist who first described this effect in her doctoral thesis in the late 1920s. Some accounts have it that Zeigarnik noticed this effect while she was watching waiters in a restaurant. The waiters seemed to remember complex orders that allowed them to deliver the right combination of food to the tables, yet the information vanished as the food was delivered.

43 Simple Ways To Simplify Your Life Post written by Sherri Kruger. Follow me on Twitter. Simplicity. 4 Reasons Why Being Comfortable Isn’t a Good Thing We should all be comfortable, shouldn’t we? Well the answer may be obvious to most; yes of course everyone should have the right to a comfortable life. However comfort most often goes hand in hand with stagnation, in whatever your goals may be. How to Make Better Oil Paintings: Tips & Techniques for Correctly Mixing Color There’s nothing more frustrating when painting then not being able to mix the right color. When I first started oil painting, it didn’t matter that I could see EXACTLY what color I needed, because everything I mixed up still turned into mud. In the end, it just took a little more understanding of how color works. In this tutorial I’m going to pass along that knowledge.

A Pattern Language for Productivity, Pattern #3: Checklists by Andre · 4 Comments Checklists are mental inventories made physical. Instead of trying to hold your thoughts on a topic entirely in your head, write them down as a list. Experiment with making checklists for anything and everything that has your attention. The Brain-Based Secret to Personal Productivity By now, you've probably already broken most of your New Year's resolutions. You're not alone: Only about 8 percent of those who make them keep them. But it may not be that you'll never lose weight or learn a foreign language. If you aren't being productive or if you feel off track, it could simply be because you haven't set yourself up for success in a way that suits your individuality. Take a typical New Year's resolution like running. The overall goal is to lose weight.