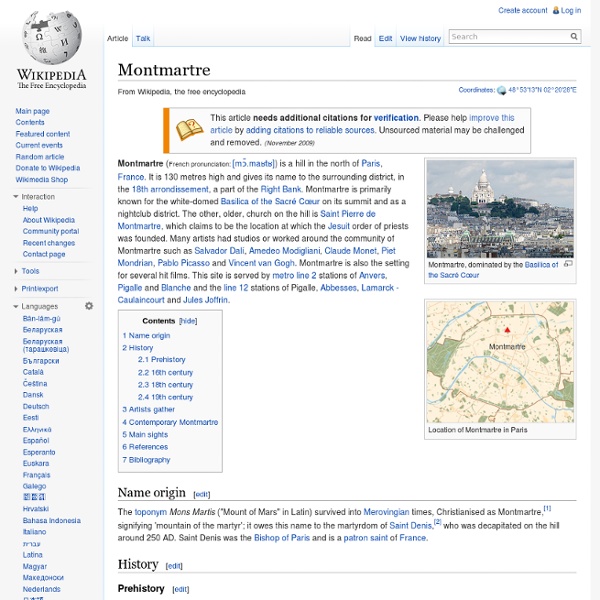 Montmartre Location of Montmartre in Paris Name origin[edit] The toponym Mons Martis ("Mount of Mars" in Latin) survived into Merovingian times, Christianised as Montmartre,[1] signifying 'mountain of the martyr'; it owes this name to the martyrdom of Saint Denis,[2] who was decapitated on the hill around 250 AD. Saint Denis was the Bishop of Paris and is a patron saint of France. History[edit] Prehistory[edit] The hill's religious symbolism is thought to have originated in prehistory, as it has been suggested as a likely druidic holy place because it is the highest point in the area. 16th century[edit] 18th century[edit] In the 18th and 19th centuries, there were a number of gypsum mines in Montmartre. 19th century[edit] There is a memorial sign on one of the restaurants on Montmartre that says "On 30 March 1814 - here the Cossacks first launched their famous "Bistro" and thus on this summit occurred the worthy Ancestor of our Bistros".[6] Basilica of the Sacré Cœur, Montmartre, Paris. Related:  Travel B

Grenada Grenada i/ɡrɨˈneɪdə/ is an island country consisting of the island of Grenada and six smaller islands at the southern end of the Grenadines in the southeastern Caribbean Sea. Grenada is located northwest of Trinidad and Tobago, northeast of Venezuela, and southwest of Saint Vincent and the Grenadines. Grenada is also known as the "Island of Spice" because of the production of nutmeg and mace crops of which Grenada is one of the world's largest exporters. Its size is 344 square kilometres (133 sq mi), with an estimated population of 110,000. History French colony (1649–1763) On March 17, 1649, a French expedition of 203 men from Martinique led by Jacques du Parquet founded a permanent settlement on Grenada. British colony (1763–1974) Nutmeg was introduced to Grenada in 1843 when a merchant ship called in on its way to England from the East Indies. In 1877, Grenada was made a Crown colony. Toward independence (1950–1974) Independence and revolution (1974–1983) Invasion by the United States

Champs-Élysées The Avenue des Champs-Élysées (French pronunciation: [av(ə).ny de ʃɑ̃.ze.li.ze]) is a boulevard in the 8th arrondissement of Paris, 1.9 kilometres long and 70 metres wide, which runs between the Place de la Concorde and the Place Charles de Gaulle, where the Arc de Triomphe is located. It is famous for its theatres, cafés and luxury shops, and for the military parade that takes place each year on the avenue on 14 July to celebrate Bastille Day. The name is French for Elysian Fields, the paradise for dead heroes in Greek mythology. Description[edit] The avenue runs for 1.91 km (1.18 mi) through the 8th arrondissement in northwestern Paris, from the Place de la Concorde in the east, with the Obelisk of Luxor,[1] to the Place Charles de Gaulle (formerly the Place de l'Étoile) in the west, location of the Arc de Triomphe. The Champs-Elysées seen from the Arc de Triomphe. View at pedestrian level as seen from the middle of the avenue looking west. History[edit] Events[edit] Public transport[edit]

Beira, Mozambique Beira is the second largest city in Mozambique. It lies in the central region of the country in Sofala Province, where the Pungue River meets the Indian Ocean. Beira had a population of 412,588 in 1997, which grew to an estimated 546,000 in 2006. It holds the regionally-significant Port of Beira which acts as a gateway for both the central interior portion of the country as well as the land-locked nations of Zimbabwe, Zambia and Malawi. Beira was originally developed by the Portuguese Mozambique Company in the 19th century, and directly developed by the Portuguese colonial government from 1947 until Mozambique gained its independence from Portugal in 1975. History[edit] Portuguese rule[edit] View of Rua Conselheiro Ennes, Beira, c. 1905. The city was established in 1890 by the Portuguese and soon supplanted Sofala as the main port in the Portuguese-administered territory. After independence from Portugal[edit] Climate[edit] Beira features a tropical savanna climate (Köppen Aw). Tourism[edit]

Musée du Louvre The Louvre or Louvre Museum (French: Musée du Louvre, pronounced: [myze dy luvʁ]) is one of the world's largest museums and a historic monument. A central landmark of Paris, France, it is located on the Right Bank of the Seine in the 1st arrondissement (district). Nearly 35,000 objects from prehistory to the 21st century are exhibited over an area of 60,600 square metres (652,300 square feet). With more than 9.7 million visitors each year, the Louvre is the world's most visited museum.[6] The museum is housed in the Louvre Palace, originally built as a fortress in the late 12th century under Philip II. Remnants of the fortress are visible in the basement of the museum. The museum opened on 10 August 1793 with an exhibition of 537 paintings, the majority of the works being royal and confiscated church property. History[edit] 12th-20th centuries[edit] Medieval, Renaissance, and Bourbon palace[edit] The only portion of the medieval Louvre still visible[9] French Revolution[edit] Opening[edit]

Zanzibar Zanzibar (/ˈzænzɨbɑr/; from Persian: زنگبار‎ Zangibār "Coast of Blacks"; zangi [black-skinned] + bār [coast])[3][4] is a semi-autonomous part of Tanzania, in East Africa. It is composed of the Zanzibar Archipelago in the Indian Ocean, 25–50 kilometres (16–31 mi) off the coast of the mainland, and consists of numerous small islands and two large ones: Unguja (the main island, referred to informally as Zanzibar), and Pemba. The capital of Zanzibar, located on the island of Unguja, is Zanzibar City. Its historic centre, known as Stone Town, is a World Heritage Site and is claimed to be the only functioning ancient town in East Africa.[5] History[edit] Before 1698[edit] The presence of microlithic tools suggests that Zanzibar has been home to intelligent humans for at least 20,000 years,[7] which was the beginning of the Later Stone Age. Persian traders used Zanzibar as a base for voyages between the Middle East, India, and Africa. Sultanate of Zanzibar[edit] The old castle in Zanzibar

Eiffel Tower The tower has three levels for visitors, with restaurants on the first and second. The third level observatory's upper platform is 276 m (906 ft) above the ground,[2] the highest accessible to the public in the European Union. Tickets can be purchased to ascend by stairs or lift (elevator) to the first and second levels. History Origin "not only the art of the modern engineer, but also the century of Industry and Science in which we are living, and for which the way was prepared by the great scientific movement of the eighteenth century and by the Revolution of 1789, to which this monument will be built as an expression of France's gratitude." Little happened until the beginning of 1886, when Jules Grévy was re-elected as President and Édouard Lockroy was appointed as Minister for Trade. The "Artists Protest" Caricature of Gustave Eiffel comparing the Eiffel tower to the Pyramids. Construction The start of the erection of the metalwork Lifts Inauguration and the 1889 Exposition 19 October 1901