Daisy the Dinosaur on the App Store 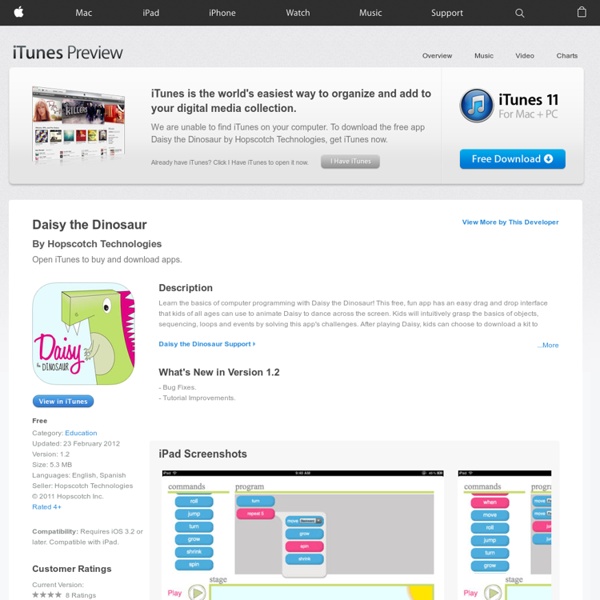 Teacher led Hour of Code lesson plans - by grade and subject Now that tens of thousands of educators have tried the Hour of Code, many classrooms are ready for more creative, less one-size-fits-all activities that teach the basics of computer science. To help teachers find inspiration, we collected and curated one-hour teacher-led lesson and activity plans designed for different subject areas for Hour of Code veterans. Elementary School Scratch Animate Your Name Ages 8 to 16. 15+ Ways of Teaching Every Student to Code (Even Without a Computer) According to Code.org, 90 percent of parents in the U.S. want their children to learn computer science—it will be crucial for many jobs in the near future—but only 40 percent of schools teach it. Critics claim that it is mainly the more affluent schools that offer computer science courses, thus denying those who attend poorer schools the chance to learn necessary skills. A focus on STEM is not enough: Code.org also reports that while 70 percent of new STEM jobs are in computing, only 7 percent of STEM graduates are in computer science. It is imperative that savvy schools begin to focus some STEM resources on computer science and programming.

28 Tools to Learn Computer Programming From edshelf by edshelf: A discovery engine of websites, mobile apps, desktop programs, and electronic products for teaching and learning. Teaching primary and secondary students how to program has become a hot topic lately. Even people like United States President Barack Obama to actress Angela Bassett to music artist Shakira have spoken about the value of computer programming in an initiative called Hour of Code. With good reason too. Technology is a major part of our lives. Knowing how to build new technologies means having the ability to shape its direction.

7 Programming Languages to Teach Kids How to Code Blockly is Google's refinement of Scratch using the same interlocking building blocks metaphor, but it can output code in several different programming languages. Currently, this includes JavasScript, Python, PHP, Lua, and Dart. That makes Blockly a visual editor rather than just a kid-friendly programming language. In fact, you can see the code along the side of your screen as you link blocks together, and you can switch programming languages on the fly to see the difference in language syntax for the same basic program. This makes Blockly ideal for teaching code to a wide range of ages, including older kids and adults who may not appreciate the younger-skewed cat and cartoons of Scratch.

FEATURE: The Maze Coder Introducing students as young as 5 to the concepts of computer science can be challenging but also immensely rewarding. Though blockly-based platforms like Scratch and Hopscotch can prove too tricky for them, there are a wide range of apps available that introduce youngsters to sequencing, algorithms and simple computational thinking. From Daisy the Dinosaur to Lightbot and The Foos (my favourite for use with Foundation Stage students) the choice is excellent and the touch screen interface helps to streamline the process for those getting their very first taste of coding. Rather than start with an app though, I like to start with something more practical when first introducing computer science concepts in KS1. This could mean using floor robots to sequence a series of steps or perhaps something unplugged that takes a more kinaesthetic approach. There were a couple of major advantages to this approach.

Coding Game for Kids Code Master Think Fun Review We love board games! We love STEM! What better opportunity to test out a brand new coding game from Think Fun! Code Maven from Crunchzilla <h2>Code Maven gets teens excited about programming. It is an interactive tutorial where anyone can experiment with learning to code. <p> Code Maven from Crunchzilla uses Javascript. Please enable Javascript if you want to play with Code Maven. Otherwise, Code Maven will not be able to play with you. CALLING ALL CODERS By 2018, there will be more than two million open jobs in STEM (science, technology, engineering, math) professions, but only 19 percent of current college degrees are in STEM fields. Even worse, 75 percent of students that do well in science and math decide to not pursue STEM in college. If we want to remain a global leader, we have to develop more interest in these topics. One way to do that is by to show students that coding ties into nearly everything we do. And to do that, we need to incorporate programming into the curriculum, just as they’ve done in the following examples. At the South Bronx Early College Academy, a public charter school for grades six and seven, computational thinking is woven into every class.

Computer Coding Game No Computer Needed Superhero Activity A computer coding game is a really fun way to introduce the basic concept of computer coding to young kids. Even better if you make it a superhero computer coding game! Plus you don’t actually have to have a computer, so it’s a cool tech-free idea. This homemade coding game was pretty easy to set up and can be played with over and over again with any type of pieces. Use superheroes,LEGO, My Little Ponies, Star Wars, or whatever you have to learn a little about programming. Superhero Computer Coding Game. 12Blocks Products > 12Blocks 12Blocks is an intuitive, powerful environment for programming popular robots. It’s a visual language that makes programming as simple as drag-n-drop. Hundreds of blocks support everything from reading sensors to integrating with the Robot Operation System. 12Blocks provides rich graphical debugging tools and guided tutorials to make both novice and expert programmers successful. Download Purchase Getting Started Simply snap blocks together to create programs

Cody & Roby Cody & Roby is the name of a new series of DIY games that provide the easiest way to start playing with coding and robotics at any age, without computers, tablets or smartphones. Download your DIY starter kit! Roby is a robot who executes instructions, Cody is a coder who provides instructions. Life After the Hour of Code Now that the excitement of the Hour of Code has passed, and you still vividly remember your students' eyes light up while completing their coding challenges, you may be wondering how to keep that excitement going in your classroom. The only thing is, you don't teach computer science -- and you have no idea how to teach coding. The great news is, that's fine!