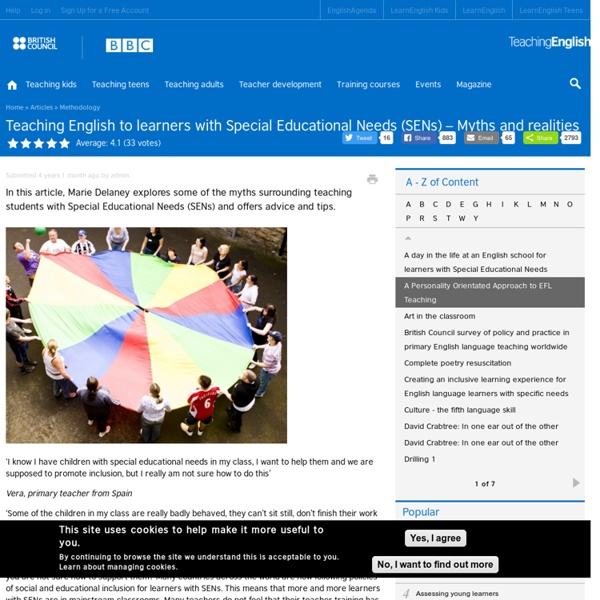 ‘I know I have children with special educational needs in my class, I want to help them and we are supposed to promote inclusion, but I really am not sure how to do this’ Vera, primary teacher from Spain ‘Some of the children in my class are really badly behaved, they can’t sit still, don’t finish their work and are always calling out. I think they might have a learning difficulty, but I don’t know what to do’ Kris, secondary teacher from Poland Do you feel like these teachers? Myth 1 – You have to be a specialist psychologist or specially trained teacher to know how to teach these learners No, you don’t. Myth 2 – other learners in the class make less progress when they are taught with learners with SENs No, this is not necessarily the case. Myth 3 – learners with SENs cannot learn languages No, this does not have to be true. Myth 4 – it takes a lot of extra time and planning No. Myth 5 – a teacher can’t ‘fix’ the learner’s problem so there is nothing I can do Definitely not true. 1. 2. 3. 4.

Being Multilingual: You speak with an accent. I don’t. Accents are things that only other people have. They are, by extension, things that you don’t want to have. Accents are, in short, shortcomings. This is why, if someone tells you that “you speak with no accent”, you can be sure of two things: that you have received words of praise indeed; and that you speak with the same accent as that person. The natives and the speakers Let me start with the good news. We are, all of us without exception, native speakers. This may come as a surprise to those of us who have had close encounters with the second/foreign language world, but is nonetheless true. It means that we are all competent users of language – more or less competent, of course, depending on all sorts of individual and social factors that make us clumsy or proficient in whatever we do.

Does my toddler have a short attention span because she won’t sit still for a story? A: It is perfectly normal for toddlers to not sit still very long—period. Most don’t like to stay in one place for long now that they can explore in so many new ways—by running, jumping, and climbing. So, an adult’s idea of snuggling on the couch to hear a story may not be the same idea a toddler has for story-time. You may only be able to read or talk about a few pages in a book at a time.

Selective mutism Selective mutism is a severe anxiety disorder where a person is unable to speak in certain social situations, such as with classmates at school or to relatives they don't see very often. It usually starts during childhood and, left untreated, can persist into adulthood. A child or adult with selective mutism doesn't refuse or choose not to speak, they're literally unable to speak.

I Said I Want the Red Bowl! Responding to Toddlers' Irrational Behavior Pin It Amelia, told that she can’t have a fifth book before bedtime, shouts: “You are the meanest mommy! You are not invited to my birthday party!” Schema and Fairies - Kathy Brodie Early Years Training Schemas are one of those things that divide practitioners, like fairies at the bottom of the garden. You either believe in them and are in absolute awe at how amazing they are, or you just don’t believe they exist. It’s really interesting when you discuss this with people and it’s extra exciting when a ‘non-believer’ suddenly says “That describes my key child exactly!!” But first of all, let’s explore what a schema is.

FAQ: Raising Bilingual Children Why want bilingual children? There are many reasons, but the two most common are: 1) The parents speak different languages (say, an American woman and a Turkish man). 2) The parents speak the same language, but live in a community where most people speak something else (say, a Korean couple living in the USA). Schemas in Children’s Play - N a t u r e P l a y Written by Clare CaroSchemas in Children’s Play are such an important concept when it comes to the development of our children that it’s worth taking the time to understand them so you can facilitate them when you see them.What are these schemas?Well it’s really a fancy word for the urges that children have to do things like climb, throw things and hide in small places. They appear through play; perhaps it is the way they choose to do things, or what they desperately need to do out of the blue! Bringing It All TogetherAfter looking at each schema individually to get to grips with what each 'urge' is all about we may already be able to recognise some of the different ways they can appear in your child.Rotation, Trajectory, Enveloping, Orientation, Positioning, Connection, Enclosure/Container, Transporting and Transformation are urges that show in all children starting as early as their first birthday, some times before.How Can Knowing About These Urges Help Us?