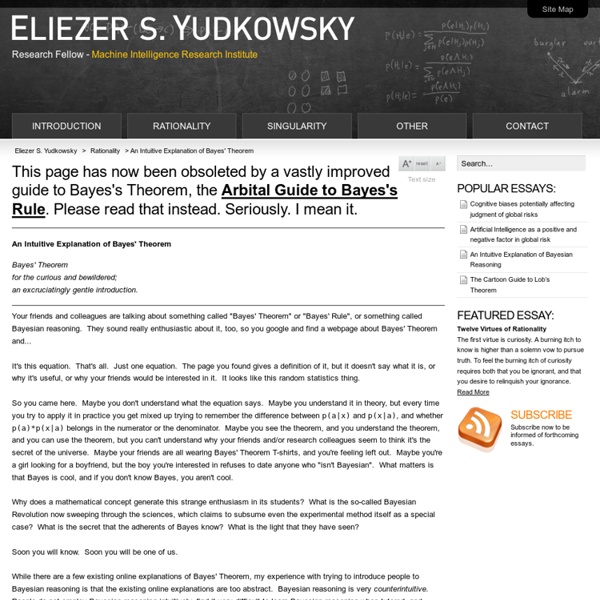 An Intuitive Explanation of Bayes' Theorem Bayes' Theorem for the curious and bewildered; an excruciatingly gentle introduction. Your friends and colleagues are talking about something called "Bayes' Theorem" or "Bayes' Rule", or something called Bayesian reasoning. They sound really enthusiastic about it, too, so you google and find a webpage about Bayes' Theorem and... It's this equation. That's all. So you came here. Why does a mathematical concept generate this strange enthusiasm in its students? Soon you will know. While there are a few existing online explanations of Bayes' Theorem, my experience with trying to introduce people to Bayesian reasoning is that the existing online explanations are too abstract. Or so they claim. And let's begin. Here's a story problem about a situation that doctors often encounter: What do you think the answer is? Next, suppose I told you that most doctors get the same wrong answer on this problem - usually, only around 15% of doctors get it right. E. E.

Unhappy Truckers and Other Algorithmic Problems - Issue 3: In Transit When Bob Santilli, a senior project manager at UPS, was invited in 2009 to his daughter’s fifth grade class on Career Day, he struggled with how to describe exactly what he did for a living. Eventually, he decided he would show the class a travel optimization problem of the kind he worked on, and impress them with how fun and complex it was. The challenge was to choose the most efficient route among six different stops, in a typical suburban-errands itinerary. The class devised their respective routes, then began picking them over. The Second Story Of Echo And Narcissus Are you listening closely? This is the story you know: "Narcissus was a man who was so in love with himself that he fell in love with his own reflection.

Understanding the Fourier transform » #AltDevBlogADay Yes, I realize that after reading the title of this post, 99% of potential readers just kept scrolling. So to the few of you who clicked on it, welcome! Don’t worry, this won’t take long. Inconsistent Mathematics, Reutersvärd, and Buddhism: An Interview with Chris Mortensen Inconsistent Mathematics, Reutersvärd, and Buddhism: An Interview with Chris Mortensen by Michael Lopresto Chris Mortensen is Emeritus Professor of Philosophy at the University of Adelaide. He thinks that the inconsistent hasn't been taken seriously enough in Western philosophy, that the masterpieces of Reutersvärd rub our noses in the inconsistent, and that Western philosophy and Buddhism are complementary. Stop Bullshitting Yourself If You Want To Wake Up (From The True Matrix) I’m trying to free your mind Neo. But I can only show you the door. You’re the one who has to walk through it.— Morpheus, The MatrixTweet This I have it all, but I feel a void… I think I fell asleep at the wheel of my life. I’m my very own “Walking Dead.”

Marty and Michael in Math Magic Land Is there an Occulted Numeric Language Embedded Within Our Culture? Via Midwest Real A visual representation of Pi to 10,000 digits. I shan’t bullshit you my friends, I suck at math. If you forced me to do algebra with a gun to my head, the event could only end with my landlord having PTSD. Stars in My Pocket Like Bits of Data by Paul Stephens The poetics of information overload. Eric Hu, Drone. © Eric Hu. Everybody gets so much information all day long that they lose their common sense. —Gertrude Stein A human being takes in far more information than he or she can put out. “Stupidity” is a process or strategy by which a human, in response to social denigration of the information that she or he puts out, commits him- or herself to taking in no more information than she or he can put out.