27 Things Your Teacher Librarian Does 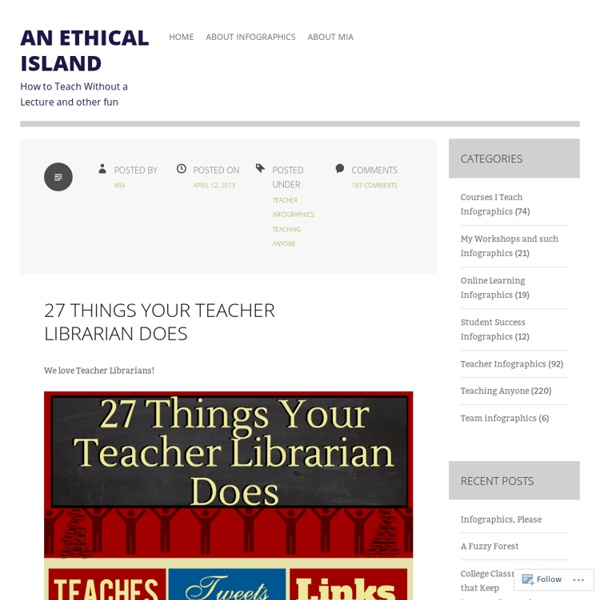 Four Things Students Need to Create Book Trailer Videos This is an update of a blog post that I published about 16 months ago. The concepts are the same, but some of the resources have been updated. Creating book trailer videos is a great alternative to a traditional written book report assignment. In a book trailer video students highlight their favorite elements of a story and try to entice viewers to read the book themselves. Much like a movie trailer that tries to get viewers to watch the full movie, a book trailer should give viewers just enough to be interested in the full story without giving away the conclusion to the story. If you have heard of book trailers and wanted to try having your create book trailers, here are the four things they'll need to get started after reading a book.

ites - EOL LaGarde Craven Feb2013 Connect: @jenniferlagarde #ncdpi_dtlContact: jennifer.lagarde@dpi.nc.govBlog: www.librarygirl.net What is a "21st Century" Librarian? Let's take a look at several visions of what today's School Library Media Coordinator should look like. What is a "21st Century" Librarian? School Libraries and Their Influence on School Culture School culture refers to the way teachers and other staff members work together and the set of beliefs, values, and assumptions they share. A positive school climate and school culture promote students’ ability to learn (ASCD, 2017). Students, staff, administration, and parents are influential to the school culture, but so is the facility, the history, and the community.

'Escape the Room!' classroom games - ActiveHistory Overview: What is an "Escape Room"? An escape room is, according to Wikipedia, "a physical adventure game in which players solve a series of puzzles using clues, hints and strategy to complete the objectives at hand. Players are given a set time limit to unveil the secret plot which is hidden within the rooms". The School Library Media Specialist: Library Media Program: Introduction "Every school is different, and every school library is a reflection of its own unique school culture." Richard Turner (2006) in The Whole School Library Handbook, New Library World; 17(5/6); 263-265. How do I know if I'm reaching my goals? Should I be reporting my progress to the principal?

18 Times Libraries Had the Best Holiday Displays Ever Libraries are truly the gift that keeps on giving! If you’re the kind of bookworm who absolutely loves going to the library every chance you get — and you’ve been dreaming of a bookish holiday season — then you’re sure to adore these dazzling displays, which prove that libraries really know how to tap into the holiday spirit. 1. We wouldn’t trim a thing on this bookish tree. 2. This snowman isn’t melting anytime soon.

I have forgotten how to read Author of Solitude: A Singular Life in a Crowded World and The End of Absence: Reclaiming What We've Lost in an Age of Constant Connection. Turning, one evening, from my phone to a book, I set myself the task of reading a single chapter in one sitting. Simple. But I couldn't. There was nothing wrong with my eyes. ITALICS - Volume 5 Issue 4 eLit 2006 was held on the 28th – 30th June 2006 at Loughborough University . The conference brought together academics, teachers, IT trainers & support staff, librarians and learning technologists from around the world to share experience, good practice and to discuss issues relating to the embedding of e-literacy skills into the curriculum and society as a whole. This is a special conference issue of ITALICS, jointly published with the Journal of e-Literacy (JelIT- and includes a selection of papers submitted to the conference and expanded for this publication. e-Literacy can be described as the “the awareness, skills, understandings and reflective–evaluative approaches that are necessary for an individual to operate comfortably in information–rich and IT–supported environments.” (Martin 2003). Many of the papers included in this issue consider aspects of formal education at different levels, in different countries throughout the world.

Free Photos for Education Pics4Learning is a safe, free image library for schools. Teachers and students can use the copyright-friendly photos and images for classrooms, multimedia projects, web sites, videos, portfolios, or any other project in an educational setting. Photographers from around the world donate images to this collection. While the photographers retain the rights to these photos, they have graciously allowed their use through this collection. The thousands of donated photos are approved for use in the classroom, indexed, and sorted in order to maximize their effective use by students in a 21st century classroom. With your active participation, this image collection will continue to grow into an even more valuable resource.

Arranging library fiction by genre Changes in fiction arrangement or labelling gives you an opportunity to promote and discuss with library users the characteristics of different genres. It also helps identify personal reading preferences, people who share reading preferences, and effective book selection strategies. Promote at sessions with students as they visit the library. Barbie Has a New Body Cover Story Photographs by Kenji Aoki for TIME Inside the biggest change in barbie’s 57-year history–and what it says about American beauty ideals Part 1Barbie’s dress won’t fit. I’m sitting in a bright pink room at Mattel’s headquarters in El Segundo, Calif., playing with a Barbie that only 20 people in the world know exists.

Reading makes you feel more empathy for others Do you want your children to grow up to become empathetic people? If so, new research suggests that you should encourage them to read. In a study measuring brain activity while people were reading in three different languages, researchers found that reading stories is a universal experience that may result in people feeling greater empathy for each others, regardless of a person's origin or language. Libraries in the 21st century: the struggle between perception and reality By Pilar Quezzaire A panoramic view of a school library in Amsterdam. (Photo submitted by Joe O’Brien, Librarian, Amsterdam International Community School, Netherlands) It speaks volumes when the man in charge of the world’s fourth-biggest public library insists digital technologies are an opportunity rather than a threat to libraries. In an interview with Forbes Magazine, Anthony W Marx, president of New York Public Library, countered fears that they were dying: There are people who think that the Digital Age is a mortal threat to the library.