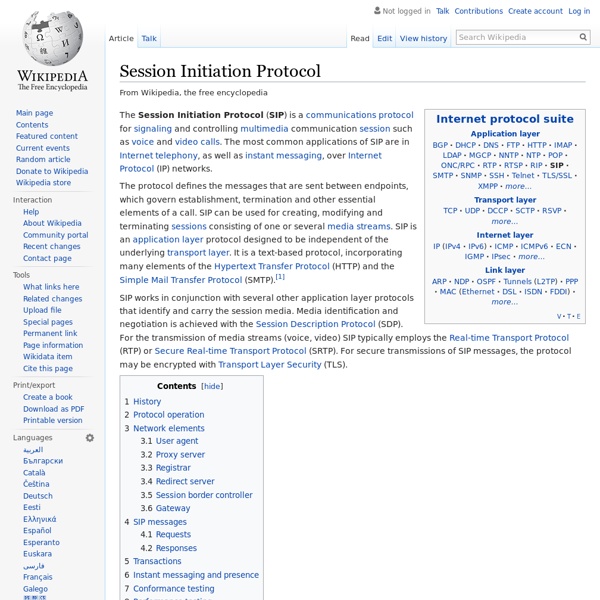 SIP works in conjunction with several other application layer protocols that identify and carry the session media. Media identification and negotiation is achieved with the Session Description Protocol (SDP). For the transmission of media streams (voice, video) SIP typically employs the Real-time Transport Protocol (RTP) or Secure Real-time Transport Protocol (SRTP). For secure transmissions of SIP messages, the protocol may be encrypted with Transport Layer Security (TLS). History[edit] The protocol was designed with the vision to support new multimedia applications. SIP is distinguished by its proponents for having roots in the Internet community rather than in the telecommunications industry. Protocol operation[edit] SIP employs design elements similar to the HTTP request/response transaction model.[8] Each transaction consists of a client request that invokes a particular method or function on the server and at least one response. Network elements[edit] User agent[edit] Registrar[edit]

Simple Sensor Interface protocol The SSI ("Simple Sensor Interface") protocol is a simple communications protocol designed for data transfer between computers or user terminals and smart sensors. The SSI protocol is an Application layer protocol as in the OSI model. The SSI protocol has been developed jointly by Nokia, Vaisala, Suunto, Ionific, Mermit and University of Oulu. Currently SSI is being developed within the Mimosa project, part of the European Union Framework Programmes for Research and Technological Development. The SSI protocol is used in point-to-point communications over UART and networking nanoIP applications. SSI also provides polling sensors and streaming sensor data.

Real Time Streaming Protocol The Real Time Streaming Protocol (RTSP) is a network control protocol designed for use in entertainment and communications systems to control streaming media servers. The protocol is used for establishing and controlling media sessions between end points. Clients of media servers issue VCR-style commands, such as play and pause, to facilitate real-time control of playback of media files from the server. The transmission of streaming data itself is not a task of the RTSP protocol.

denial of service - how does a sip flood attack work? current community your communities Sign up or log in to customize your list. more stack exchange communities Stack Exchange sign up log in tour help TUTORIAL: How to create two 100% free SIP accounts to try the SIP Connector... Anyone with a broadband internet connection can try the SIP Connector. If you don't know VOIP, or if you don't have access to a SIP account, you can see how it works by following this tutorial. You are going to use the free SIP service provided by pbxes.org, in order to create 2 SIP extensions.

Network News Transfer Protocol As local area networks and Internet participation proliferated, it became desirable to allow newsreaders to be run on personal computers connected to local networks. Because distributed file systems were not yet widely available, a new protocol was developed based on the client-server model. It resembled the Simple Mail Transfer Protocol (SMTP), but was tailored for exchanging newsgroup articles. A newsreader, also known as a news client, is a software application that reads articles on Usenet, either directly from the news server's disks or via the NNTP. Simple Network Management Protocol SNMP exposes management data in the form of variables on the managed systems, which describe the system configuration. These variables can then be queried (and sometimes set) by managing applications. Overview and basic concepts[edit] Principle of SNMP Communication In typical SNMP uses, one or more administrative computers, called managers, have the task of monitoring or managing a group of hosts or devices on a computer network.

Domain Name System The Domain Name System (DNS) is a hierarchical distributed naming system for computers, services, or any resource connected to the Internet or a private network. It associates various information with domain names assigned to each of the participating entities. Most prominently, it translates domain names, which can be easily memorized by humans, to the numerical IP addresses needed for the purpose of computer services and devices worldwide. Real-time Transport Protocol The Real-time Transport Protocol (RTP) defines a standardized packet format for delivering audio and video over IP networks. RTP is used extensively in communication and entertainment systems that involve streaming media, such as telephony, video teleconference applications, television services and web-based push-to-talk features. RTP is used in conjunction with the RTP Control Protocol (RTCP). While RTP carries the media streams (e.g., audio and video), RTCP is used to monitor transmission statistics and quality of service (QoS) and aids synchronization of multiple streams.

How to reset your password in Ubuntu This work is licensed under a Creative Commons Attribution-ShareAlike 3.0 Unported License. There are many reasons you might want to reset a password: Someone gave you a computer with Ubuntu installed on it but not the password for the user account.You just installed Ubuntu and forgot what password you selected during the installation process.You have too many passwords in your life and can't keep track of them all. Well, this tutorial will help you reset your Ubuntu user account password, regardless of what reason you have for resetting it. First, you have to reboot into recovery mode. If you have a single-boot (Ubuntu is the only operating system on your computer), to get the boot menu to show, you have to hold down the Shift key during bootup.

Session Initiation Protocol Android provides an API that supports the Session Initiation Protocol (SIP). This lets you add SIP-based internet telephony features to your applications. Android includes a full SIP protocol stack and integrated call management services that let applications easily set up outgoing and incoming voice calls, without having to manage sessions, transport-level communication, or audio record or playback directly. File Transfer Protocol FTP is built on a client-server architecture and uses separate control and data connections between the client and the server.[1] FTP users may authenticate themselves using a clear-text sign-in protocol, normally in the form of a username and password, but can connect anonymously if the server is configured to allow it. For secure transmission that hides (encrypts) the username and password, and encrypts the content, FTP is often secured with SSL/TLS ("FTPS"). SSH File Transfer Protocol ("SFTP") is sometimes also used instead, but is technologically different. History[edit] The original specification for the File Transfer Protocol was written by Abhay Bhushan and published as RFC 114 on 16 April 1971. Until 1980, FTP ran on NCP, the predecessor of TCP/IP.[2] The protocol was later replaced by a TCP/IP version, RFC 765 (June 1980) and RFC 959 (October 1985), the current specification.