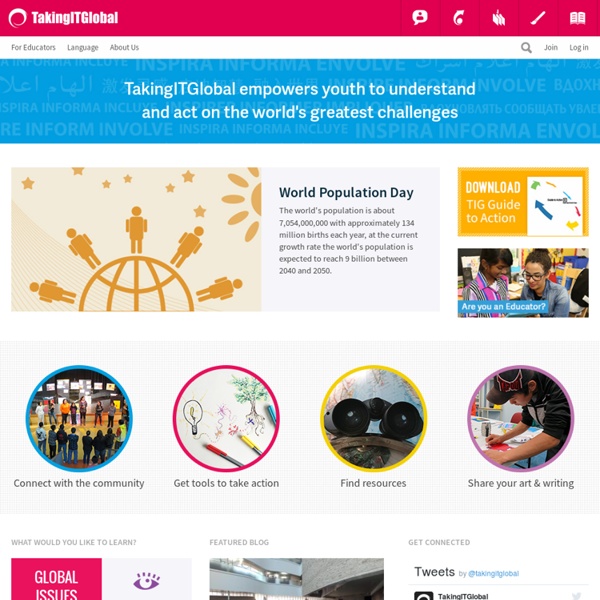 Watch the videos to find out more. What's this all about? TakingITGlobal's mission is to empower youth to understand and act on the world's greatest challenges. We can't wait for you to get involved! Learn More 30 Day Challenge:Low Carbon Lunch

100 Time-Saving Search Engines for Serious Scholars (Revised) Back in 2010, we shared with you 100 awesome search engines and research resources in our post: 100 Time-Saving Search Engines for Serious Scholars. It’s been an incredible resource, but now, it’s time for an update. Some services have moved on, others have been created, and we’ve found some new discoveries, too. Many of our original 100 are still going strong, but we’ve updated where necessary and added some of our new favorites, too. Check out our new, up-to-date collection to discover the very best search engine for finding the academic results you’re looking for.

notthisbody personal cargo Some thoughts on the New Aesthetic. A few days ago Bruce Sterling posted an "Essay on the New Aesthetic", summing up his most recent thoughts after a panel at SXSW, similarly titled "The New Aesthetic - Seeing like digital devices". The focal point of definition for this New Aesthetic is well documented and a gestalt emerges quite quickly on the New Aesthetic tumblr, a juxtaposition of quotes, images, sensations, videos highlighting myriad examples of that which its curators are recognizing is already happening. In short, New Aesthetic touches in some sense the bleeding of the virtual dimension into the actual and our increasing reflection of our own methods of sensing in machines, and vice versa.

Atlantis Remixed Transformational play involves the use of virtual worlds to help people learn and grow in a context where they can fail safely. Theory At its core, transformational play is a learning and empowerment philosophy that is grounded in the belief that each one of us is capable of, wants to, and deserves to achieve, great things. 100 Amazing How-To Sites to Teach Yourself Anything Posted by Site Administrator in Online Learning May 7th, 2009 Learning new skills and expanding your knowledge doesn’t have to cost you an arm and a leg. There are loads of free resources on the Web that can help you find instructional videos, tutorials and classes to learn a wide variety of skills from fixing basic car problems to speaking another language.

The 'F' Word - 10 Tips To Get More Out Of Facebook In Education Even the mention of the word ‘Facebook‘ is enough to send a shiver down the spine of many educators. Privacy risks and ‘friending’ students scares many teachers off using Facebook for education. But it doesn’t have to be that way. The Facebook community, whether we like it or not, is enormous and it can be used in schools to do great things. Over the past few years, the social network has grown so far beyond just “adding friends”. There are many ways to connect without having to ‘friend’ students, not to mention the hundreds of ways Facebook can be used to connect the school community (parents, relations, friends, etc.) and build your PLN.

The Museum of Islamic Art It isn’t often that a building stuns – literally. However, this is the case with the Museum of Islamic Art in Doha, the capital of Qatar. Traditional Islamic architecture meets the twenty first century to spectacular effect. Nothing is done by halves here. Even the palm lines entrance (and entrancing is perhaps the right word) fills the visitor with expectation. Sublimely designed by IM Pei, the museum opened its doors to the public less than two years ago. gavinkeech personal cargo phases are cycling through the increase of momentum brought on by interplay sequenced through recognition. exhausting parameters to their stretched states allow the decay values to become discovered. upon discovery, arrival of presence, flows to the environments ground. intensity of emotion, feelings entwined with realisation that the possibilities can arise more probable than initially conditioned, through emergence of understanding what is required, do vectors resonate inputs, to flow freely, in their own accord towards the electromagnetic* (resonance)+ core. state / mode as an interface ( points & flows with vectors ) personas / metaconstructs = state / mode identity / experience filter = timelines dimension / environment = interface process / mechanism = actions knowledge / repository = database timelines ( personas ) are extrapolations (verb)actions ( entanglement ) are amplifications (verb)interface ( metaconstructs ) are communications (verb) hyperphysics x_axis = time’s affinity

The Best Web 2.0 Applications For Education In 2011 — So Far I usually just do a year-end list on Web 2.0 Applications For Education and many other topics, but it gets a little crazy having to review all of my zillion posts at once. So, to make it easier for me — and perhaps, to make it a little more useful to readers — I’m going to start publishing mid-year lists, too. These won’t be ranked, unlike my year-end “The Best…” lists, and just because a site appears on a mid-year list doesn’t guarantee it will be included in an end-of-the-year one. But, at least, I won’t have to review all my year’s posts in December… As usual, in order to make this list, a site had to be: The Best Game Design Schools In North America yes we do actually. the average american college graduate has about $25,000 in student loans, although for many students, particularly depending on the school, it can be much more. I did WPI (not CS though) 15ish years ago and even then I thought everything was unnecessarily expensive. I'm beginning to think its some sort of artificial gauntlet they make you run to be part of "the club". There are low interest loan programs in the US you can take advantage of along with some scholarship opportunities.

Programs - IDEA IDEA has several programs involving research and development of real-world projects that align with our organizational mission: Promoting scientific, artistic and cultural literacy • WordFlare advances interest in and knowledge of the English language via a mobile app that presents interlinked concepts using SpicyNodes technology and gamefication. Coming Summer 2013. • The IDEA blog advocates for the role of technology in advancing scientific and cultural literacy while encouraging the cross-fertilization of ideas for an audience of executive-level staff in nonprofit, scientific, cultural, and educational institutions.

Global Ideas Bank The Global Ideas Bank's origins lie in the Institute for Social Inventions, which was set up in 1985 by Nicholas Albery, social inventor and visionary. From small beginnings (a network of inventors, a quarterly newsletter), the Institute grew into a full-fledged organisation under his leadership: producing an annual compendium, running social inventions workshops and promoting creative solutions around the world. It was part of the first European Social Innovations Exchange. In 2001, the Institute was awarded a Margaret Mead Special Recognition Award for "community creativity for a new century" In 1995, the Global Ideas Bank (originally suggested by an American correspondent, Gregory Wright) was first established online, and has since become the name for the entire project's work. See also[edit]

A Year in Reading 2012 By C. Max Magee posted at 6:00 am on December 3, 2012 20 The end of another year is here (so soon? Ah, I’m getting old), and with it a flood of valedictory lists and wrap ups, accountings and scorecards. Each year, as these lists spill out across the landscape, the onslaught becomes difficult to parse and begins to feel suspiciously (to us, anyway) like a marketing boondoggle to support the promotional-book-cover-sticker-and-blurb industry. There are so many “best of the year” lists that everything is the best (and sometimes also the worst).

Taking IT Global - educators, organizations, etc by mosaic May 20