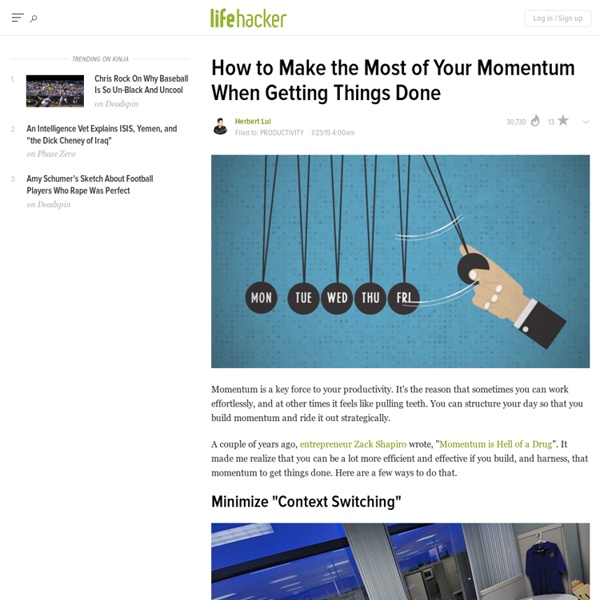 Related:  Do It Now - Hack away procrastination • LIFEHACKER ARTICLES • esalyn

6 Scientific Tactics to Stop Procrastinating Procrastination is something that everyone deals with. Given the fact that this is blog is for the self-employed and online freelancers, it’s a bit surprising to me that some of our most popular posts have been on being more productive and staying disciplined. I have to assume that most of us who work from our computers have some of the worst cases of procrastination of all!

How to Create (and Stick to) a Realistic Budget with Mint I use it with my BoA account. It's great, and the budgeting system is awesome, especially since I just got out of school and am living on my own with bills/loans to pay. I have two gripes, however: 15-productivity-hacks-for-procrastinators There are more than six billion people in this world and I am willing to bet that the majority of us are probably procrastinators. It is just an easy habit to fall into. Think of procrastination as if it were like quick sand. It is easy to stumble and sink into and hard to get out of. Not to worry though, here are some tips that can help pull you out of the procrastination pit.

How To Use Mint To Manage Your Budget & Spendings Online Mint is a free, automatic online finance tracking and budgeting platform much like Microsoft Money and Quicken. Since adding my financial accounts (Paypal, credit cards, banking), I”˜ve stopped using similar software applications on my Mac and iPhone. Mint does all the personal accounting work for me. In this article, I’ll share some tips on using the features of Mint to track and budget your spending. How to Make a Mint Budget – Setting Up Categories When you add your financial accounts to your Mint account, about a year’s worth of your past and current transactions get added to your account. Manage Procrastination - Think of the Future as Now To fight procrastination, researchers offer a simple trick: think of the future as now. “The simplified message that we learned in these studies is if the future doesn’t feel imminent, then, even if it’s important, people won’t start working on their goals,” says Daphna Oyserman, lead researcher and co-director of the USC Dornsife Mind and Society Center. Through a series of scenarios, Oyserman and coauthor Neil Lewis Jr. of the University of Michigan found that study participants perceived that the future was much more imminent if they thought of their goals and deadlines in days instead of months or years. Oyserman says that through this shift in time metrics, people can motivate themselves to accomplish their goals. “So when I think in a more granular way—when I use days rather than years—it makes me feel like the future is closer,” Oyserman says.

How Can I Be Productive Without Everyone Else Piling On More Work? Learn to fail (in things that are not important). When I feel overloaded I deliberately start failing at things that are not important, but highly visible. So I 'forget' to do agendas for meetings, I send minutes out late, or sometimes just bring photocopies of scribbled bullet points. The Procrastination Doom Loop—and How to Break It When I woke up this morning, I had one goal: Finish this article by 11 a.m. So, predictably, by the time it was 10 a.m., I had made and consumed two cups of coffee, taken out the trash, cleaned my room while taking a deliberately slow approach to folding my shirts, gone on a walk outside to clear my head, had a thing of yogurt and fruit to reward the physical exertion, sent an email to my aunt and sister, read about 100 Tweets (favorited three; written and deleted one), despaired at my lack of progress, comforted myself by eating a second breakfast, opened several tabs from ESPN.com on my browser ... and written absolutely nothing. What's the matter with me?* Nothing, according to research that conveniently justifies this sort of behavior to my editors. Or, at least, nothing out of the ordinary for writers, as Megan McArdle has explained on this site. I'm just a terrible procrastinator.

How You Work: Post-Lunch Productivity and Introverted Networking Is that a house phone? Every week we showcase the productivity tips and tricks of our favorite experts and productivity heroes in our How I Work series. Now, we're peppering our daily dose of tips with some showcases from you, our favorite readers. This week: Sunanda V, product manager at Pearson Education. Stop Procrastinating by "Clearing to Neutral" By Thanh Pham We often procrastinate because there is this one hidden thing holding us back. It is this one thing that makes you procrastinate and most people are not even aware what this is, but if you eliminate it you can say goodbye to procrastination forever. Friction A lot of times we procrastinate because we have to jump through a lot of hurdles before we can do the thing we actually want to do.

Productivity Hacks: 60 Influencers on How to Work Smarter This post is part of a series in which LinkedIn Influencers share their secrets to being more productive. See all their #productivityhacks here. “2014 is my year!” you might have said, joyful and hopeful, when midnight struck on January 1st. The Mechanics of Preventing Procrastination Procrastination is, in essence, stealing from yourself. The reason goals are so hard to reach, many psychologists think, is because each person believes they are really two people: Present Me and Future Me. And to most people, Future Me is much less important than Present Me. Present Me is the CEO of Me Corp, while Future Me is a lowly clerk.

Related:
Related:  Do It Now - Hack away procrastination   -  LIFEHACKER ARTICLES   -  esalyn   -  Lifehacker Cooking   -  Lifehacker articles   -  Albino Blacksheep   -  Liveplasma Discovery Engine   -  Structured Procrastination: Do Less & Deceive Yourself   -  The Lifehacker Cookbook   -  PointlessSites.com - Fun Things To Do When You're Bored   -  Will It Blend? | Presented by Blendtec   -  Procrastination hack: '(10+2)*5'   -  random website dot com   -  Whatdoestheinternetthink.net   -  Arduino Hacks: Arduino Tutorials & DIY Arduino plans   -  How to Overcome Procrastination Using Self Talk: 9 Steps   -  The Surprising Realities Behind What Motivates Us in Illustrated Form   -  0. Introductions and Expectations   -  How to Recover from 10 Types of Demotivation   -  The Little Book of Procrastination Remedies : zenhabits   -  60 Ways To Make Life Simple Again   -  Get Off Your Butt: 16 Ways to Get Motivated When You’re in a Slump   -  Top 20 Motivation Tips   -  11 Ways to Cure Someday Syndrome : zenhabits   -  The original design consultancy. | TEAGUE   -  The Top 51 Time Wasters (Updated for 2015)   -  BackTrack Wiki   -  How To Motivate Yourself – Self Motivation | PickTheBrain | Motivation and Self Improvement   -  10+ Dishes and Drinks Everyone Should Know How to Make At Home (Including You)   -  Top 10 PDF Tricks   -  Geek to Live: Take great notes   -  Eat That Frog!: 21 Great Ways to Stop Procrastinating and Get More Done in Less Time: Brian Tracy: 9781576754221: Amazon.com: Books   -  Top 10 Things Every Budding Foodie Should Know   -  Electronic products for the discerning hacker   -  How Seinfeld's Productivity Secret Fixed My Procrastination Problem   -  Start Every Day as a Producer, Not a Consumer   -  Top 10 Crazy Kitchen Tricks That Speed Up Your Cooking   -  The Stupid Things You Do in the Kitchen (and How to Fix Them)   -  How Can I Recharge My Depleted Motivation?   -  How to Build a Rotating Canned Food Shelf: 14 Steps   -  Why we procrastinate by Vik Nithy @ TEDxYouth@TheScotsCollege - YouTube