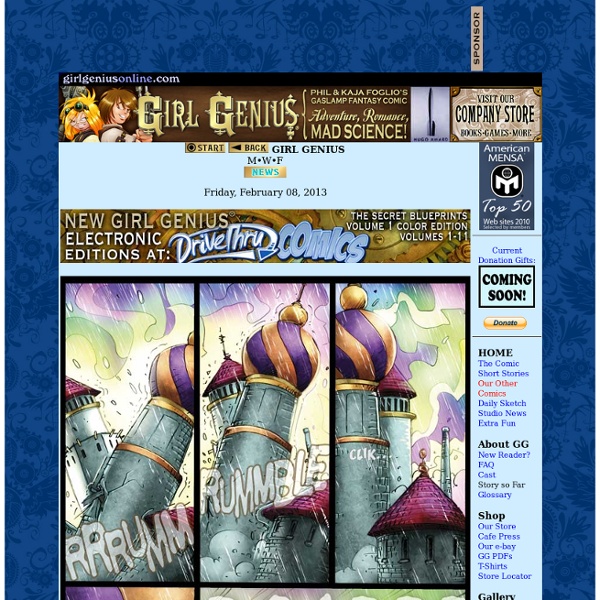 Girl Genius is written by Professors Phil & Kaja Foglio of TPU, with drawings by Prof. P. Foglio. Volume One was inked by Brian Snoddy. Volumes Two and Three were colored by Mark McNabb. Volume Four was colored by Laurie E. Girl Genius is a registered trademark of Studio Foglio, LLC. AutoKeen Lite programmed by Darren Bleuel, as a service of Keenspot Comics.

What's New with Phil & Dixie Online Comics Welcome! The comics you'll find here were written and drawn in the 1980's and 1990's. They appeared in Dragon magazine: TSR's Dungeons & Dragons publication. So yes, they're all about RPGs and the gamers who love them. What's New collections on paper can be had from your local book or comic store, Amazon.com or our Studio Foglio Online Company Store. Thank you for visiting us!

I feel so awesome To wet your appetite with the bonus story found in our new EC book, here's a sample page of the 8 page print-exclusive bonus story. We're pretty happy with the story, so we hope you'll like it! Also, the crossover between Magick Chicks and Eerie Cuties is in full swing. Be sure to visit both sites for twice the fun!

San Mateo, California Now you can listen to KCSM Jazz 91 anywhere you want. Download our app from iTunes or Android Market today. It's Free! Pot Luck Comics Ensign Sue Every Friday!February 3, 2014 by Sarah Once more with feeling! Ensign Sue returns for her latest, epic adventure by Clare Moseley and Kevin Bolk. When we last left our heroes, they were a house divided: Captain torn from crew, Ensign Sue torn from love, and the Doctor torn limb from limb. Caught in the jaws of a mind-boggling higher-power, the situation was grim!

International Society for the Systems Sciences The International Society for the Systems Sciences (ISSS) is among the first and oldest organizations devoted to interdisciplinary inquiry into the nature of complex systems, and remains perhaps the most broadly inclusive. The Society was initially conceived in 1954 at the Stanford Center for Advanced Study in the Behavioral Sciences by Ludwig von Bertalanffy, Kenneth Boulding, Ralph Gerard, and Anatol Rapoport. In collaboration with James Grier Miller, it was formally established as an affiliate of the American Association for the Advancement of Science in 1956. Originally founded as the Society for General Systems Research, the society adopted its current name in 1988 to reflect its broadening scope.

Catalog Details Page Written/Edited by: Steven E. Wallis 2011, ISBN 9780984216505 (125 pages), Emergent Publications Available Formats: Why do policies fail? How can we objectively choose the best policy from two (or more) competing alternatives? Webcomics My first webcomic launched with this site in 1998. From 1998 to 2004, I regularly posted new comics in various experimental formats, occasionally getting into long online debates about whether this-or-that format was a step toward the future of comics or just a gimmicky dead-end. Most of the comics in this section play with the idea of treating the screen as a window rather than a page (the so-called "infinite canvas" style, most often associated with my book Reinventing Comics). For the most part, that meant big, clunky html tables for users to scroll through, but a few of the later comics like The Right Number test-drove alternate methods like plug-ins which weren't available when the site launched in '98.