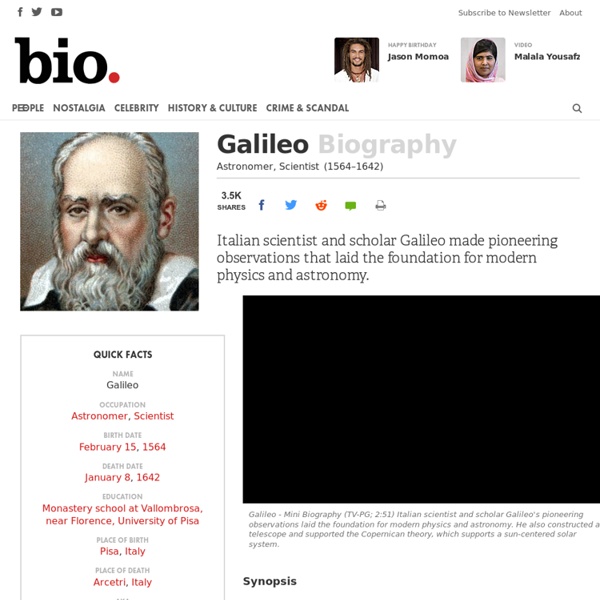 Italian scientist and scholar Galileo made pioneering observations that laid the foundation for modern physics and astronomy. Synopsis Born on February 15, 1564, in Pisa, Italy, Galileo Galilei was a mathematics professor who made pioneering observations of nature with long-lasting implications for the study of physics. Early Life Galileo Galilei was born on February 15, 1564, in Pisa in the Duchy of Florence, Italy. In 1583, Galileo entered the University of Pisa to study medicine. Academic Career Galileo continued to study mathematics, supporting himself with minor teaching positions. Galileo quickly found a new position at the University of Padua, teaching geometry, mechanics and astronomy. Controversial Findings In 1604, Galileo published The Operations of the Geometrical and Military Compass, revealing his skills with experiments and practical technological applications. In 1623, a friend of Galileo, Cardinal Maffeo Barberini, was selected as Pope Urban VIII. Reaction by the Church Related:  Night at the Museum • Heroes and Saints 2015

Attila the Hun - Military Leader, King Attila the Hun was one of the most successful barbarian rulers of the Hunnic Empire, attacking the Eastern and Western Roman empires. Synopsis Born in what is now Hungary circa 406, Attila the Hun, 5th century king of the Hunnic Empire, devastated lands from the Black Sea to the Mediterranean, inspiring fear throughout the late Roman Empire. Dubbed "Flagellum Dei" ("Scourge of God"), Attila consolidated power after murdering his brother to become sole ruler of the Huns, expanded the rule of the Huns to include many Germanic tribes and attacked the Eastern Roman Empire in wars of extraction. He never invaded Constantinople or Rome, and left a divided family following his death in 453. Taking Control of the Hunnic Empire Born in Pannonia, a province of the Roman Empire (present-day Transdanubia, Hungary), circa 406, Attila the Hun and his brother, Bleda, were named co-rulers of the Huns in 434. Attila united the tribes of the Hun kingdom and was said to be a just ruler to his own people.

Patrick St. Patrick of Ireland is one of the world's most popular saints. He was born in Roman Britain and when he was fourteen or so, he was captured by Irish pirates during a raiding party and taken to Ireland as a slave to herd and tend sheep. "The love of God and his fear grew in me more and more, as did the faith, and my soul was rosed, so that, in a single day, I have said as many as a hundred prayers and in the night, nearly the same. Patrick's captivity lasted until he was twenty, when he escaped after having a dream from God in which he was told to leave Ireland by going to the coast. A few years after returning home, Patrick saw a vision he described in his memoir: "I saw a man coming, as it were from Ireland. The vision prompted his studies for the priesthood. Patrick arrived in Slane, Ireland on March 25, 433. He often used shamrocks to explain the Holy Trinity and entire kingdoms were eventually converted to Christianity after hearing Patrick's message. In His Footsteps:

Life of Galileo This article refers to Life of Galileo (play) written by Bertolt Brecht. It focuses specifically on the relationship between the text and the context Encountering Conflict. This is essentially a story about what happens when societal authority and individual conscience clash. Throughout the play, Brecht explores the complexities of the relationship between an individual and a society, along with the struggles an individual must endure in choosing between their ideology and their personal safety. It is important to keep in mind that while much of this text is an accurate depiction of Galileo’s life and conflict with the Church, the play is a creative work and takes great liberty with the scientist’s personal life. Brecht’s style Biblical references. More importantly though, let’s look at the big ideas of Encountering Conflict which emerge from Life of Galileo. Types of conflict Internal conflict Galileo’s findings create a further internal conflict in some of the characters around him.

Galileo | Italian philosopher, astronomer and mathematician GalileoItalian philosopher, astronomer and mathematician Also known as Galileo Galilei born February 15, 1564 Pisa, Italy died January 8, 1642 Arcetri, Italy Galileo, in full Galileo Galilei (born February 15, 1564, Pisa [Italy]—died January 8, 1642, Arcetri, near Florence), Italian natural philosopher, astronomer, and mathematician who made fundamental contributions to the sciences of motion, astronomy, and strength of materials and to the development of the scientific method. Early life and career Galileo was born in Pisa, Tuscany, on February 15, 1564, the oldest son of Vincenzo Galilei, a musician who made important contributions to the theory and practice of music and who may have performed some experiments with Galileo in 1588–89 on the relationship between pitch and the tension of strings. In 1588 Galileo applied for the chair of mathematics at the University of Bologna but was unsuccessful. Telescopic discoveries Galileo’s Copernicanism Galileo was then 70 years old.

Brendan Help support New Advent and get the full contents of this website as an instant download. Includes the Catholic Encyclopedia, Church Fathers, Summa, Bible and more — all for only $19.99... St. Having established the See of Ardfert, St. Voyage of St. St. Comments Sources About this page APA citation. MLA citation. Transcription. Ecclesiastical approbation. Contact information. Galileo Portal The Life of Galileo is a play in fifteen scenes that Brecht worked on, endlessly revising it, for over twenty years. The first version dates from November 1938, during the author’s exile in Denmark. At this stage Galileo appears as a hero who astutely chooses to bow down before power in order to continue his scientific research. But the historical events of the day, first nuclear fission and then the atom bomb, led to great changes in the text. Galileo becomes an anti-hero and his abjuration the act that dramatically calls into question the relationship between science and society. Wrote Brecht, "In the midst of our work, the ‘atomic age’ made its debut at Hiroshima. The play revised in this manner – most notably in scene XIV – was performed in July 1947, directed by Joseph Losey, at the Coronet Theater in Beverly Hills, Los Angeles. "Galileo’s wrongdoing may be considered the ‘original sin’ of the modern natural sciences.

Attila | king of the Huns Attacks on the Eastern Empire. The empire that Attila and his elder brother Bleda inherited seems to have stretched from the Alps and the Baltic in the west to somewhere near the Caspian Sea in the east. Their first known action on becoming joint rulers was the negotiation of a peace treaty with the Eastern Roman Empire, which was concluded at the city of Margus (Požarevac). By the terms of the treaty the Romans undertook to double the subsidies they had been paying to the Huns and in future to pay 700 pounds (300 kilograms) of gold each year. From 435 to 439 the activities of Attila are unknown, but he seems to have been engaged in subduing barbarian peoples to the north or east of his dominions. Attila’s movements after the conclusion of peace in the autumn of 443 are unknown. Invasion of Gaul. Attila’s next great campaign was the invasion of Gaul in 451. E.A.

Hildegard of Bingen December 17 St. Hildegard of Bingen (1098-1179) Abbess, artist, author, composer, mystic, pharmacist, poet, preacher, theologian--where to begin describing this remarkable woman? Born into a noble family, she was instructed for ten years by the holy woman Blessed Jutta. When Hildegard was 18, she became a Benedictine nun at the Monastery of St. Disibodenberg. Hildegard's visions caused her to see humans as "living sparks" of God's love, coming from God as daylight comes from the sun. Like all mystics, she saw the harmony of God's creation and the place of women and men in that. Hildegard was no stranger to controversy. Between 1152 and 1162, Hildegard often preached in the Rhineland. In 2012, Hildegard was canonized and named a Doctor of the Church by Pope Benedict XVI. Hildegard once wrote, “In the year 1141...a fiery light, flashing intensely, came from the open vault of heaven and poured through my whole brain.

BBC Bitesize - GCSE Drama - Epic theatre and Brecht - Revision 1 Sacagawea - Native American History Within a month, a near-tragedy earned Sacagawea particular respect. The boat in which she was sailing nearly capsized when a squall hit and Charbonneau, the navigator, panicked. Sacagawea had the presence of mind to gather crucial papers, books, navigational instruments, medicines and other provisions that might have otherwise disappeared—all while simultaneously ensuring her baby’s safety. In appreciation, Lewis and Clark named a branch of the Missouri for Sacagawea several days later. Clark, in particular, developed a close bond with Sacagawea as she and Baptiste would often accompany him as he took his turn walking the shore, checking for obstacles in the river that could damage the boats. Five days after the first members of the Corps crossed the Continental Divide at Lemhi Pass, Sacagawea did, as planned, translate the captains’ desire to purchase horses to the Shoshone they encountered. Sacagawea also put her naturalist’s knowledge to use for the Corps.

Biography of Archbishop Oscar Arnulfo Romero - International Day for the Right to the Truth Concerning Gross Human Rights Violations and for the Dignity of Victims, 24 March A youthful Father Oscar Romero with Salvadorans (Photo courtesy of the Archbishop Romero Trust) Óscar Arnulfo Romero y Galdámez (August 15, 1917 - March 24, 1980) was a prominent Roman Catholic priest in El Salvador during the 1960s and 1970s becoming Archbishop of San Salvador in 1977. After witnessing numerous violations of human rights, he began to speak out on behalf of the poor and the victims of repression. This led to numerous conflicts, both with the government in El Salvador and within the Catholic Church. Oscar Arnulfo Romero y Galdámez was born in Ciudad Barrios, El Salvador, on August 15, 1917. Romero spent the first two and half decades of his ministerial career as a parish priest and diocesan secretary in San Miguel. Romero's rise to prominence in the Catholic hierarchy coincided with a period of dramatic change in the Church in Latin America.