The official blog of THE HOBBIT movies 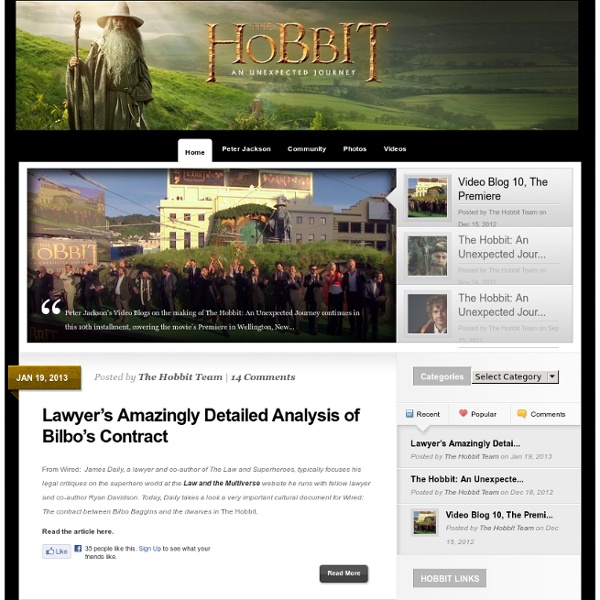 Posted by The Hobbit Team | 4 Comments Andy Serkis in The Hollywood Reporter The Hollywood Reporter reports that Andy Serkis has come on board to direct Warner Bros.’ live action take on The Jungle Book. It is unclear if he will take a part in the movie at this stage. Jungle Book would be Serkis’ feature directorial debut after directing second unit on Peter Jackson’s The Hobbit movies. Some of the shoots involved the creation of elaborate and lively action sequences.

Silmarillion Heraldic Devices While doing newspaper crossword puzzles J. R. R. J. R. R. Tolkien John Ronald Reuel Tolkien, CBE (/ˈtɒlkiːn/ TOL-keen;[a] 3 January 1892 – 2 September 1973) was an English writer, poet, philologist, and university professor, best known as the author of the classic high fantasy works The Hobbit, The Lord of the Rings, and The Silmarillion. He served as the Rawlinson and Bosworth Professor of Anglo-Saxon and Fellow of Pembroke College, Oxford, from 1925 to 1945 and Merton Professor of English Language and Literature and Fellow of Merton College, Oxford from 1945 to 1959.[1] He was at one time a close friend of C. S. Lewis—they were both members of the informal literary discussion group known as the Inklings. Tolkien was appointed a Commander of the Order of the British Empire by Queen Elizabeth II on 28 March 1972.

Timeline of the history of Middle-Earth - LotrProject 6 October Sam returns to Bag End on his faithful pony, Bill, after seeing of many of his friends at the Grey Havens. 29 September Gandalf, Frodo Baggins, Bilbo Baggins, Galadriel and Elrond leave Middle-earth and pass over the Sea.

The Hobbit News 'The Hobbit: There and Back Again' May Be Getting a Different Title Towards the end of this year, we'll get the final chapter in Peter Jackson's trilogy adaptation of of J.R.R. Tolkien's classic book with The Hobbit: There and Back Again. But some might remember that the adaptation was originally only going to be two films, and when it was expanded to three, the title of what would have been the second film was merely applied to the third. The Lord of the Rings by JRR Tolkien reviewed on Fantasy Book Review Reader reviews Have Your Say Andrew Luck from USA Started the book and it is great. Guy from Israel Tolkien spent many decades creating the world of Middle-Earth.

Hobbit: The Battle of the Five Armies artwork shows film's climactic clash By Mike Larkin for MailOnline Published: 03:00 GMT, 17 September 2014 | Updated: 03:01 GMT, 17 September 2014 It has been an unexpectedly long journey. Rohan Rohan was the territory of the Rohirrim, a people of herdsmen and farmers on the northern borders of Gondor in Middle-earth. Well-known for their horses and cavalry, they were Gondor's most important ally. [edit] Background In the 1200s of the Third Age, the Kings of Gondor made close alliances with the Northmen of Rhovanion, a people akin to the Three Houses of the Edain (later the Dúnedain) from the First Age. In the 2000s, a remnant tribe of such Northmen that called itself the Éothéod moved from the valleys of Anduin to the north west of Mirkwood, clearing out what remained of the recently defeated witch kingdom of Angmar, east of the Misty Mountains. While there, some dispute arose between them and the dwarves over the treasure-hoard of Scatha the dragon.