Why can’t the world’s greatest minds solve the mystery of consciousness? 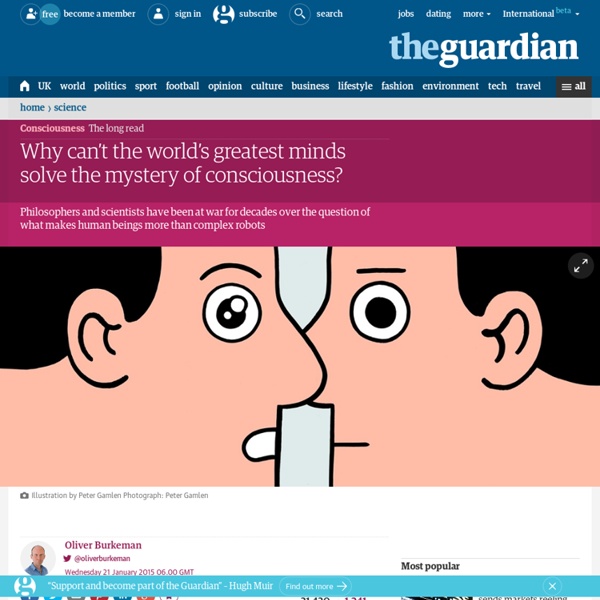 One spring morning in Tucson, Arizona, in 1994, an unknown philosopher named David Chalmers got up to give a talk on consciousness, by which he meant the feeling of being inside your head, looking out – or, to use the kind of language that might give a neuroscientist an aneurysm, of having a soul. Though he didn’t realise it at the time, the young Australian academic was about to ignite a war between philosophers and scientists, by drawing attention to a central mystery of human life – perhaps the central mystery of human life – and revealing how embarrassingly far they were from solving it. The scholars gathered at the University of Arizona – for what would later go down as a landmark conference on the subject – knew they were doing something edgy: in many quarters, consciousness was still taboo, too weird and new agey to take seriously, and some of the scientists in the audience were risking their reputations by attending. Such non-conscious humanoids don’t exist, of course.

Leading Theory About How Consciousness Works May Be Wrong Scientists’ attempts to discern the neurological activities that constitute consciousness have taken a dramatic twist, after a recent study appeared to contradict one of the leading theories on the topic. Until now, it had been widely accepted that conscious thought requires complex, sustained and widespread brain activity, while the mind’s unconscious workings involve much shorter and simpler processes. However, the paper, which appeared in the journal Cortex, seems to show that some of the mechanisms previously considered unique to and constitutive of consciousness can in fact be observed during unconscious processes, too. In particular, the study challenges the notion that a specific event-related potential (ERP) – an electrophysiological response to external stimuli – called P3b is a key indicator of conscious thought. [H/T: New Scientist]

Who's in charge – you or your brain? | Science David Eagleman, neuroscientist at Baylor College of Medicine in Texas and bestselling author It is clear at this point that we are irrevocably tied to the 3lb of strange computational material found within our skulls. The brain is utterly alien to us, and yet our personalities, hopes, fears and aspirations all depend on the integrity of this biological tissue. How do we know this? Because when the brain changes, we change. Our personality, decision-making, risk-aversion, the capacity to see colours or name animals – all these can change, in very specific ways, when the brain is altered by tumours, strokes, drugs, disease or trauma. This clarifies some aspects of our existence while deepening the mystery and the awe of others. For example, take the vast, unconscious, automated processes that run under the hood of conscious awareness. Raymond Tallis, former professor of geriatric medicine at Manchester University and author This is because we are not stand-alone brains. David Eagleman

Consciousness May Not Be As Powerful As You Think by Monica Joshi The quality or state of awareness, or being aware of an external object or something within yourself, in short — consciousness, is the one thing that we have believed defines us as being the creatures that we are. René Descartes and John Locke struggled to comprehend its nature and Eastern philosophers have been content with calling it the “I Am.” The San Francisco State researcher, Ezequiel Morsella has suggested in his “Passive Frame Theory” (a fitting name, as we'll soon find out), that the conscious mind is like an interpreter. Morsella said that: "The interpreter presents the information, but is not the one making any arguments or acting upon the knowledge that is shared. Morsella published his work online on June 22 in the journal Behavioral and Brain Sciences. Although it appears to be in control of a myriad of impulses such as urges, thoughts, feelings, and physical actions, it simply is not. Compare consciousness to the Internet, Morsella suggests in his work.

4 Ways to Make Your Brain Work Better You're a busy person. Keeping up with your job, plus your life, has you constantly racing. It doesn't help that when working, you're distracted not only by your mobile devices, but also by your computer. If this is how you live, then Maria Konnikova has a simple message for you: Pause, step back, and recognize the actual costs of your habits. Based on Konnikova's writings, here are four ways that we can change our lifestyles so as to also improve our brains and how they function: Maria Konnikova Margaret Singer and Max Freedman. Sleep more. So how do you fix your bad sleep habits? How much sleep? Stop being an internet junkie. Using the internet in this frenetic way is just bad for us, says Konnikova. So how do you use the internet better? Put a check on your multitasking. It isn't. So how do you stop multitasking? Practice mindfulness. So how do you think like Sherlock Holmes? Research shows that such mindfulness exercises help improve your attention, your focus.

Researchers reveal the 'feelgood foods' that could make you happy (and yes, chocolate is on the list) Scientists believe they have discovered the chemical responsible for the effect 'happy foods' include chocolate, blueberries, raspberries, strawberries and even a cup of tea By Mark Prigg Published: 12:40 GMT, 20 August 2012 | Updated: 19:39 GMT, 20 August 2012 The secret to why a bar of chocolate and even a cup of tea can make us feed good may finally have been discovered. Researchers today revealed that some flavours found in commonly eaten comfort foods are chemically similar to mood enhancing drugs - and could have a similar effect. The team found natural ingredients bearing what they describe as 'a striking chemical similarity' to valproic acid, a widely used prescription mood-stabilizing drug. Researchers believe the flavours in foods such as chocolate is chemically similar to a mood altering drug, and could explain why some food makes us feel better 'Molecules in chocolate, a variety of berries and foods containing omega-3 fatty acids have shown positive effects on mood.

#98: Brain Signal For Awareness | Memory, Emotions, & Decisions Many brain-damaged patients written off as vegetative are actually alert despite being immobilized. Now doctors may be able to recognize this hidden group, according to neuroscientist Melanie Boly of the Cyclotron Research Center in Belgium. To seek the neural pattern for consciousness, Boly and her colleagues measured brain activity in vegetative, minimally conscious, and healthy subjects while playing a series of tones. Normally the brain reacts by sending information from the temporal cortex to the frontal cortex (a center of higher-order thought) and back in a loop. Boly found that the healthy and minimally conscious subjects showed neural activity throughout the complete loop, while truly vegetative ones did not. If the finding is confirmed, it could allow doctors to focus treatment on patients wrongly diagnosed as vegetative.

Consciousness Conference Hits All the Stops | Beyond Science | Science A poster at the conference. (Ben Bendig/The Epoch Times) Set in the stark beauty of Tucson, Ariz., a week-long conference that plumbs the deep questions of the mind and its place in nature has attracted people from all over the world every other year since 1994. This year was no different, with an attendance of about 700, made up of philosophers, psychologists, physicists, neuroscientists, and plenty of people there just out of interest. The conference kicked off on Tuesday, April 10, with the “War of the Worldviews,” featuring Deepak Chopra, best-selling author of the new scientific paradigm that integrates health and the mind; Susan Blackmore, a renowned psychologist skeptic; Leonard Mlodinow, a Caltech physicist who recently co-wrote the book “War of the Worldviews” with Chopra; and physicist Menas Kafatos, who has written extensively on consciousness and physics. The debate was at times lively, with audience sympathies evident by applause at certain points.