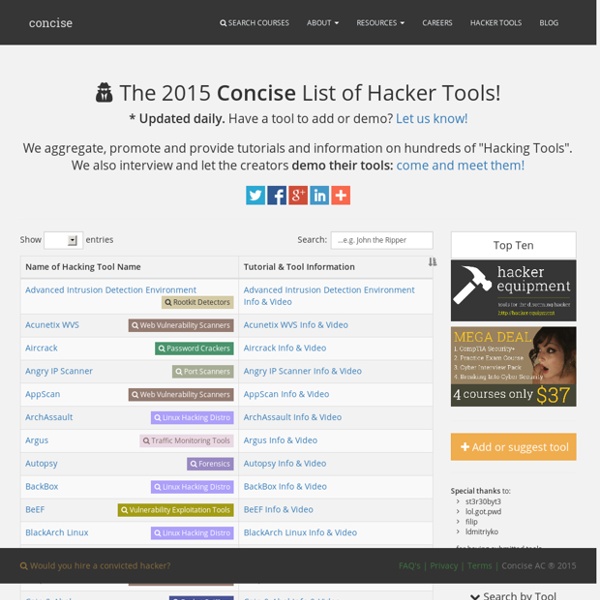 The Web's #1 Hacking Tools Directory - with tutorial videos! Hacking Tools Directory with Video Tutorials By Henry Dalziel | Information Security Blogger | Concise Courses We are big fans of blogging about Hacker Tools – for one major reason: if you are serious about working in cyber security you need to be able to use these tools like a boss. Hacking tools are what boxing gloves are to a boxer or what a spanner is to a plumber. A pentester (or ethical hacker) can be judged by their ability to use these tools, frameworks and programs, so get to know them! So!

Google hacking - Automated website hacking tools based on Google dorks Google hacking is a must for hackers and pen testers, the popular search engine is a mine of information for targeted analysis and reconnaissance phase. In the past we discussed on how to use Google hacking techniques to gather information on specific targets and discover vulnerable website on a large-scale. I decided to start from a submodule of the hacking program proposed by The Hacker Academy dedicated to use of Google during a penetration test to extend the discussion with a proof of concept. The attacker’s job is advantaged by the availability on the black market of numerous DIY tools that make possible the execution of the large amount of specifically crafted query to discover vulnerable websites. The security expert Dancho Danchev just published an interesting post on Google-dorks based mass Web site hacking/SQL injecting tool used by cyber criminals to facilitate the above malicious online activity.

Windows Privilege Escalation Fundamentals Not many people talk about serious Windows privilege escalation which is a shame. I think the reasons for this are probably (1) during pentesting engagements a low-priv shell is often all the proof you need for the customer, (2) in staged environments you often pop the Administrator account, (3) meterpreter makes you lazy (getsystem = lazy-fu), (4) build reviews to often end up being --> authenticated nessus scan, microsoft security baseline analyser... Contrary to common perception Windows boxes can be really well locked down if they are configured with care. IMMUNITY : Knowing You're Secure Welcome to Immunity Debugger Download Immunity Debugger Here! Immunity Debugger is a powerful new way to write exploits, analyze malware, and reverse engineer binary files. It builds on a solid user interface with function graphing, the industry's first heap analysis tool built specifically for heap creation, and a large and well supported Python API for easy extensibility. A debugger with functionality designed specifically for the security industry

Register for Anonymous VPN Services Buy Safe and Secure VPN Encrypted Anonymous Your PC 198.27.80.99 Montréal, Quebec Private Internet Access New IP: 31.7.56.170 Internet Hello 31.7.56.170Switzerland Basic Linux Privilege Escalation - g0tmi1k Before starting, I would like to point out - I'm no expert. As far as I know, there isn't a "magic" answer, in this huge area. This is simply my finding, typed up, to be shared (my starting point). Below is a mixture of commands to do the same thing, to look at things in a different place or just a different light. I know there more "things" to look for. It's just a basic & rough guide.

Pastenum – Pastebin/pastie enumeration tool Introduction When conducting a pen-test, the process typically starts with the reconnaissance phase, the process of gathering information about your target(s) system, organization or person. Today, we want to present a tool that can be added to your reconnaissance toolkit. Text dump sites such as pastebin and pastie.org allow users to dump large amounts of text for sharing and storage.

Logging with ELK and Docker · @ehazlett Fri, Nov 21, 2014 Elasticsearch, Logstash and Kibana (known as the “ELK” stack) provide the ability to visualize data from any source. This is a follow up to my previous Logstash post. Metasploitable 2 Exploitability Guide The shortlink for this article is: The Metasploitable virtual machine is an intentionally vulnerable version of Ubuntu Linux designed for testing security tools and demonstrating common vulnerabilities. Version 2 of this virtual machine is available for download and ships with even more vulnerabilities than the original image. This virtual machine is compatible with VMWare, VirtualBox, and other common virtualization platforms. By default, Metasploitable's network interfaces are bound to the NAT and Host-only network adapters, and the image should never be exposed to a hostile network.

10 Open Source Security Tools from Google, Facebook, Netflix and Cisco In June Netflix open sourced Security Monkey with a focus on monitoring and analyzing the security of Amazon Web Services configurations. More recently, it released Scumblr and Sketchy, two security-related Web applications. Choice has long been a defining feature of the world of free and open source software, and the constellation of options only gets bigger every year. Often it's brand-new projects causing the increase, but sometimes the growth happens in another way, when tools that were developed for a company's internal use get opened up for all the world to see, use and improve. That, in fact, is just what has been happening lately on a grand scale in the security arena, where numerous major companies have been opting to open the doors to their own, in-house tools. Google, Facebook and Netflix are all among the companies taking this approach lately, and it's changing the security landscape significantly.

The Best Hacking Tutorial Sites - Learn Legal Hacking written by: Daniel Robson•edited by: Aaron R.•updated: 2/13/2011 Whether it's to understand potential attack vectors or simply for the fun of it, learning the basics of hacking is something that a lot of people aspire to. Here's our list of the top tutorial based hacking sites. Introduction Films like Swordfish and Hackers have made hacking seem cool, a lifestyle choice almost. However most techies know that in reality it's often a difficult and time consuming process.