60 Herbs and Their Uses 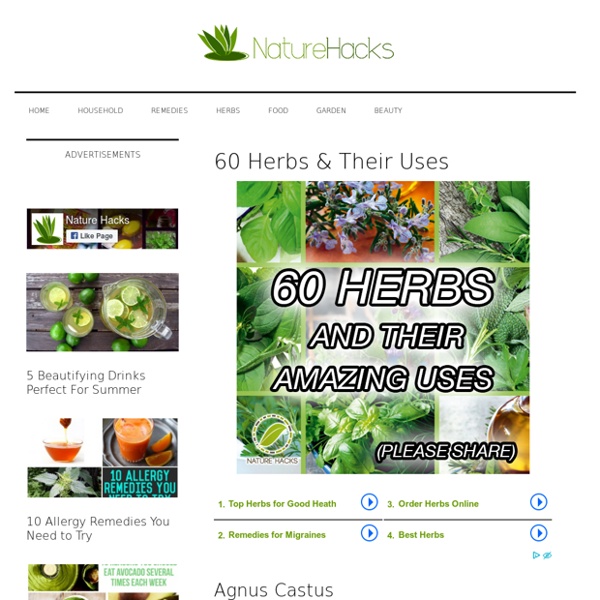 How to Make Medicinal Vinegars & Oxymels Medicinal vinegars (Vinegar Extracts) have been around since ancient times, and were an excellent way to preserve and dispense herbs before distilled spirits were known about. While the advantages of using vodka or brandy to make your herbal tinctures are many – including greater potency and longer shelf life, there are those who wish to avoid alcohol for personal reasons or due to the higher cost, making vinegar extracts ideal for them to create. Vinegar extracts (also known as “aceta”) are weaker than alcohol based tinctures, so the required dose is higher. And, while vinegar won’t draw out as many of the beneficial components of an herb that alcohol will, it does excel at drawing minerals and vitamins from a plant. Add those extra nutrients to the already established benefits of apple cider vinegar and you have a very acceptable option for your herbal remedies toolbox.

Biodynamic Organic Farming - What is it? Share by Shauna Willetts – Eco 18 Organic, pesticide free, GMO free and parabens. These are some common terms heard, or seen on a day-to-day basis, but what about the term “biodynamic organic farming”? It sounds pretty scary, doesn’t it? Slow-Cooked Beef Brisket A good brisket, cooked properly, has a rich flavor and a mouthwatering texture – it’s a powerful argument in favor of “low and slow” cooking. In this case, that doesn’t have to mean tending to the stove all day, though; with a slow cooker, you can put the meat in and then forget about it until you’re ready to dig in 8 hours later. For this recipe, cooking the meat in a rich sauce only adds to the flavor. You’ll need some homemade ketchup and Worcestershire sauce, but it’s not like you’ll be using them just for this recipe: they’re great condiments to have on hand in general, and if you have extra that you won’t be using, just freeze it in an ice cube tray so you can pop out servings as you want them.

20 of the Best Antiviral and Antibacterial Herbs and Plants Ever! Photo credit: bigstock.com Depending on your age, your mother or grandmother most likely used some type of herb or plants to help heal you when you were sick without you realizing it, or perhaps you just didn’t appreciate it at the time. For many of us, it’s not until we have our own children that we realize that we don’t want to put chemicals and other toxic things into those precious little bodies. Especially when it comes to antibiotics or antiviral medicines. You start to think that Mother Nature knew what she was doing when she made this planet, and that she must have put some type of healing plant on this earth to help us along. Before using these antiviral or antibacterial herbs, you would be wise to consult a herbalist for exact dosing instructions as everyone’s body, especially children’s, are unique and different herbs should be consumed in different quantities and in different ways, such as teas or tinctures.

Leeks WHFoods Recommendations With their unique combination of flavonoids and sulfur-containing nutrients, the allium vegetables belong in your diet on a regular basis. There's research evidence for including at least one serving of an allium vegetable in your meal plan every day. If you're choosing leeks, make your individual portion 1/2 cup or greater, and try to include at least one cup of chopped leeks in your recipes. Many people are unfamiliar with how to cook leeks or how to include them into a Healthiest Way of Eating. We recommend cutting them very thinly and preparing them by using our Healthy Sauté method of cooking.

Usnea - an herbal remedy for strep throat and staph infections. Usnea is a lichen rather than a plant. Lichens are unusual combinations of algae and fungi that work together as a single organism. It can be found growing on old trees in the cool damp of the forest. Native to the Pacific Northwest, this is an epiphytic herb, meaning that it grows abundantly on other trees without taking any nutrients from the tree, and instead gets its nutrients from surrounding air and moisture in rain or on the surface of the host tree. Historically, it was used to make skin creams, vaginal inserts, and mouthwashes and used as a dressing. Key Medicinal Uses

20 Foods that Detox Your Body & Mind The connection between the body and the mind is a very real one, with the way your body feels playing a big part in how your brain functions and whether or not you experience a state of well-being. Keeping it free of toxins, free radicals, and other nasty things that can end up in our insides is essentially to maintaining a healthy life. You’ll notice that with many of these detox foods the road to purification goes through the liver, and getting it to full capacity can have several long-lasting benefits throughout the body. Artichokes Artichokes help the liver function at its best, which in turn will help your body purge itself of toxins and other things it doesn’t need to survive. It ups the liver’s production of bile, and since bile helps break down foods which helps your body use the nutrients inside them, an increase in bile production is typically a good thing.

You Could have Parasites and Not Know It! 12 Herbs that Kill Them Photo credit: bigstock.com Parasites are a fairly common problem, even in America. Most Americans think that there is no way that they could become infected. They live in one of the richest countries in the world, don’t they? Aren’t strict food and health codes followed? How to Separate a Palm Clump There are several species of palm. They are grown through either native propagation or through reproduction and human cultivation. A palm may yield several individual plants.