The Best Websites On The Internet 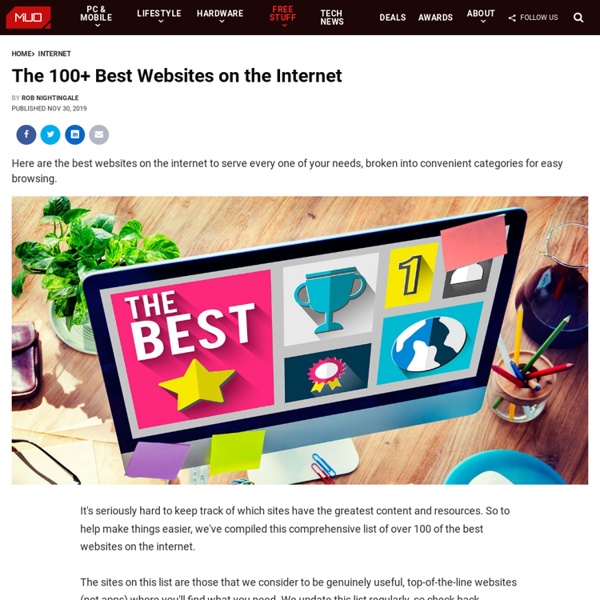 The internet is a big place, with a lot of content. Over one billion websites at the time of writing. With the web constantly changing, it’s hard to keep track of which sites have the best content and resources. To help make things easier, we’ve compiled this enormous list of the best websites on the internet, split into their relevant categories. The websites on this list are those that we consider to be the best: genuinely useful, top-of-the-line sites (not apps) where you’ll find what you need. We update this list regularly, so check back occasionally, and be sure to tell your friends! Categories: Movies | Music | News | Shopping | Productivity | Learning | Social | Search | Online Privacy | Browsing | Finance | Books | Software | Files Movies Netflix Currently around a third of all internet packets sent are Netflix packets. Hulu TV streaming service Hulu isn’t appreciated as much as it should be. Amazon Prime Instant Video Rotten Tomatoes Movie tickets are expensive. IMDb YouTube Movies Vimeo

Top 10 Best HTML5 Websites of 2016 Here are our editor's picks for the Top 10 Best HTML5 Websites of 2016 based on visual artistry, integrated sound, ease of use, and uniqueness. 1 | The Wilderness Downtown The Wilderness Downtown is an interactive music video for Arcade Fire's song ''We Used to Wait''. Visitors are asked to input the address of the home they grew up in and then the site uses Google Earth and HTML5 to create a personalized music video that takes the user on a journey back home. 2 | Heart of The Artic Heart of The Arctic takes users on an Arctic expedition/scavenger hunt through four distinct environments designed to show users the steps that would be needed to restore climate balance to the arctic region. This site perfectly showcases how Html5 can be used to create fun and educational websites.

Film History Before 1920 The Lumiere Brothers and the Cinematographe: The innovative Lumiere brothers in France, Louis and Auguste (often called "the founding fathers of modern film"), who worked in a Lyons factory that manufactured photographic equipment and supplies, were inspired by Edison's work. They created their own combo movie camera and projector - a more portable, hand-held and lightweight device that could be cranked by hand and could project movie images to several spectators. It was dubbed the Cinematographe and patented in February, 1895. The multi-purpose device (combining camera, printer and projecting capabilities in the same housing) was more profitable because more than a single spectator could watch the film on a large screen. They used a film width of 35mm, and a speed of 16 frames per second - an industry norm until the talkies.

29 Incredibly Useful Websites You Wish You Knew Earlier There are so many wonderful websites around, and it is difficult to know each and every one of them. The below list provides some of those websites that I find particularly helpful, even though they are not as famous or as prevalent as some of the big names out there. 1. BugMeNot 100 Websites To See Before You Die (Part 1) - Maximum PC Here at Maximum PC, we've always done our fair share of website recommendation articles--including a couple of doozies from the past few years. And of course we're not the only ones who do this sort of article either; it's a proven popular format. But this year, we thought we'd mix things up a little bit. Rather than just focusing on what's services are popular, or which web apps will make you the most productive, we wanted to take a look at what's fun on the Internet. In that spirit, our February cover feature is going to be 100 Websites You Need to Visit Before You Die.

Bizarre Websites On Which You Can Kill Time With Style Modern Web-building technologies allow designers to realize their most daring and creative ideas. Enhanced interactivity and a remarkable visual appearance can be achieved by means of such tools as Flash, JavaScript and Papervision3D, to name just a few. These strengths usually impress and entertain visitors and thus are often used for conceptual artistic presentations and promotional campaigns. In this post, you’ll find a collection of amusing websites that, by combining unconventional (and sometimes bizarre) ideas and clever JavaScript and Flash effects, will entice you to play on them for an embarrassing long time. Bizarre and Beautiful Websites Link Record Tripping1 Record Tripping is a nifty experimental game by Bell Brothers.

Name Every Shade of the Rainbow With This 'Color Thesaurus' Driving along the highway in Didcot, England, you may notice something strange: the road signs point the way to places like Neverland and Middle-earth. The names of these and other fictional locales from literature were seamlessly added to road signs by an artist/prankster using Transport Medium, the official font of British road signs. After some sleuthing, BBC News found the man responsible, who spoke to the outlet on the condition of anonymity. He told the BBC that he's been orchestrating "creative interventions" all over England for about 20 years under different pseudonyms, and that this project was a reaction to Didcot being labeled "the most normal town in England" in 2017, which rubbed him the wrong way.

95 best websites you should bookmark today Google is the internet surfer's best friend and worst enemy. If you know what you're after, just type it into the search engine's famous little box and – hey presto – you'll be given a list of related sites in order of relevance. Such is Google's dominance that its name has become a synonym for search. Tiny Letters Tell Brutally Honest Truth And Inspire To Be Yourself "I don’t really feel I have that 'unique' style, but I’m in love with script and flourishes since actually I began with copperplate calligraphy at first," Dexa Muamar told Lettering Guy. "The way the letters connect is something special for me, and I can play with the flourish of course. And for now I feel more comfortable drawing at small scale. [It’s] usually at 3-4cm in width."

Browse - TAMI Browse for Videos by Topic Not sure what you're looking for? Start out by exploring the categories below for footage from your hometown, to see what Texas looked like in the past, or check out some of your favorite Texas icons. 8 Free Mind Map Tools & How to Best Use Them Advertisement Here’s the good news. Finally, we can be like Leonardo da Vinci’s in one small way. No, we are not getting his polymathic superpowers. His penchant for taking free-flowing notes that filled notebooks with diagrams and scribblings is more achievable.