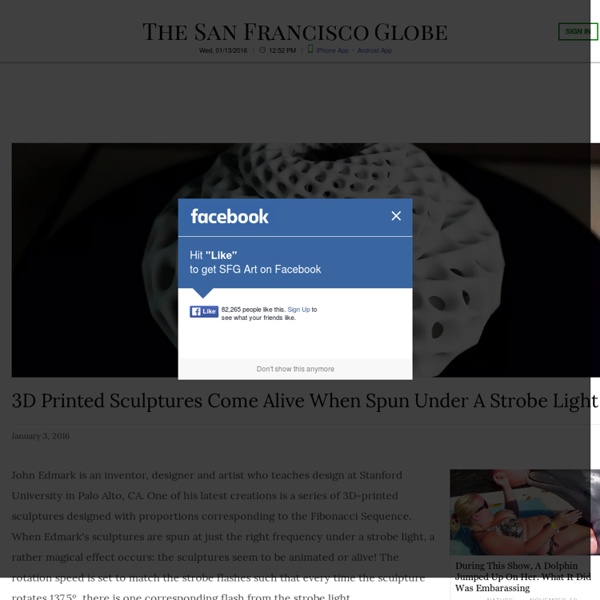 John Edmark is an inventor, designer and artist who teaches design at Stanford University in Palo Alto, CA. One of his latest creations is a series of 3D-printed sculptures designed with proportions corresponding to the Fibonacci Sequence. When Edmark's sculptures are spun at just the right frequency under a strobe light, a rather magical effect occurs: the sculptures seem to be animated or alive! The rotation speed is set to match the strobe flashes such that every time the sculpture rotates 137.5º, there is one corresponding flash from the strobe light. What makes the sequence so incredibly fascinating is its proliferation throughout nature, such as in the branching of trees, the arrangement of leaves on a stem, the flowering of baby broccoli, a nautilus shell, or even the spiral of galaxies; and that's just to name a few. You've probably seen Fibonacci's Sequence on countless occasions in your lifetime without even recognizing the pattern. What did you think of the art?

Box of Goodies I’ve realized that the only way to create realistic outdoor scenes is by adding lots and lots of nature elements. Things like trees, flowers, bushes, rocks etc. are essential in making the scene look “believable”. But I also know that creating these things by hand takes a very long time. And not everyone has time to sit down for hours on end and create tree after tree after tree. Which is why I’ve done the hard work for you :) The Box of Goodies! 60 Excellent Free 3D Model Websites 3D models represent a 3D object using a collection of points in 3D space, connected by various geometric entities. A free 3D model definitely can save your budget and deadline. On average, a modeler saves over 2 hours of modeling time when they could get a free 3D model. Today, 3D models are used in a wide variety of industries.

Edward Snowden, Glenn Greenwald, Julian Assange: What They Believe We live in the age of the leaker. Edward Snowden, Glenn Greenwald, and Julian Assange are celebrated as heroes on op-ed pages and across glossy magazine spreads. By exposing the secrets of the government, they claim to have revealed its systematic disregard for individual freedom and privacy. Theirs are not the politics of left against right, or liberals against conservatives, or Democrats against Republicans, but of the individual against the state. To oppose them is to side with power against liberty, surveillance against freedom, tyrannical secrecy against democratic openness. What’s astonishing about their ascent to heroism is the breadth of their support.

Watch a Clam 'Lick' Salt Off a Table While many of us have eaten clams before, fewer of us see them interacting with their environment. Clams feed by siphoning water and filtering it for plankton, so it might surprise you to see a recent video that appears to depict a clam 'licking' salt from a table using its 'tongue.' The 'tongue' is actually the clam's foot, which it uses to dig and anchor to its surroundings. So it's not actually eating anything at all.

Denali 3D Design Portfolio A sampling of projects designed by Marcus Ritland for 3D printing. My goal with this lamp was to explore the limits of the technology. The full story can be found here: The Story of Twisted Star Lamp. The Twisted Star Lamp, fresh from the 3D Printer 3D Printed Twisted Star Lampshade plus electricity! Composite image with design wireframes and photos of the Twisted Star Lamp. What's Really Going on With the Trade in Services Agreement The Obama administration’s desire for “fast track” trade authority is not limited to passing the Trans-Pacific Partnership (TPP). In fact, that may be the least important of three deals currently under negotiation by the U.S. Trade Representative. The Trans-Atlantic Trade and Investment Partnership (TTIP) would bind the two biggest economies in the world, the United States and the European Union. And the largest agreement is also the least heralded: the 51-nation Trade in Services Agreement (TiSA).

8 Tips for 3D Printing with Sketchup I am new to the world of 3D printing. So in this guest article, you’ll hear from expert 3D printer/designer Marcus Ritland from Denali 3D Design. He shares some tips to help you create amazing 3D printed models by designing them in Sketchup. [Update June 2014] Marcus has written a book about 3D printing your SketchUp models!

Lord Of The Rings Facts That Every Hardcore Fan Should Know (29 pics) Category: Pics | 17 Sep, 2015 | Views: 4438 | +21 | You're not truly a hardcore "Lord of the Rings" fan until you know these fun facts. AISD Middle School Tech Ed - Google Sketchup This page is for resources for the 3D modeling tool Google Sketchup. Google SketchUp is software that you can use to create 3D models of anything you like. The main page (including the download) is at It’s free so you can try it at home too! There's another baby that looks a lot like Prince George This is Prince George: He’s a toddler and third in line to the British throne. This is Tommy Cox:

Skaters Perform Impressive Tricks on Freeline Skates in Taipei Check out the new Laughing Squid Store featuring unique gear, gadgets, apps, software and more! Subscribe to the Laughing Squid email list and receive a daily email with all of the blog posts published each day. Follow on FacebookFacebookFollow on TwitterTwitterFollow on GoogleGoogleFollow on LinkedInLinkedInFollow on YoutubeYoutubeFollow on FlickrFlickrFollow on PinterestPinterestFollow on InstagramInstagramFollow on TumblrTumblrFollow on RSSRSS Laughing Squid is powered by Laughing Squid Web Hosting, WordPress and coffee. © 1995-2015 Laughing Squid LLC, all rights reserved. Laughing Squid Privacy Policy