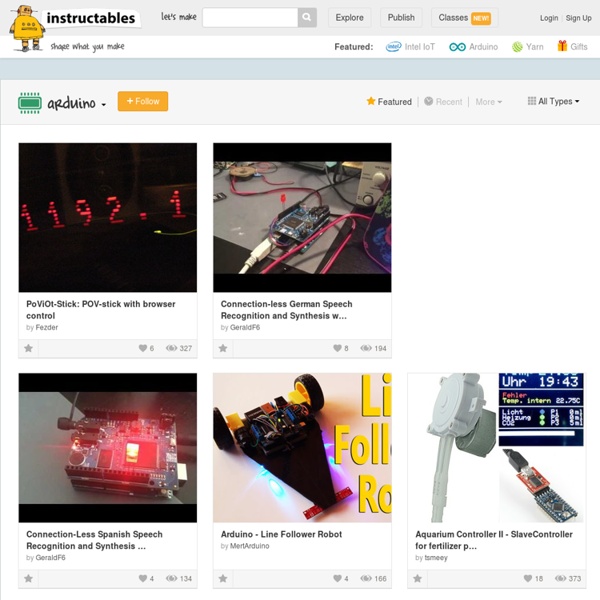 Comment construire un 5 $ Arduino (clone) If you are like me and build projects with Arduino, you must have felt the frustration with ripping your project apart, because you wanted to build something else with that Arduino. I have had the same issue many times, so I decided to find a way to solve this once and for all. Hence, how to build an Arduino clone for less than 5$. Warning: Now before we continue a warning. This post explains how to build Arduino cones for less than 5$, but it will mean that you either get creative with you current Arduino to program the Arduino bootloader, or you invest a bit in a standalone ISP programmer and a FTDI interface board (total about 20$ one time investment).

Raspberry Pi Rising: 7 personnes incroyables projets font With The Single Board Computer [VIDEO] After shifting production from China to Wales in September -- the Raspberry Pi Foundation uses Sony’s Pencoed factory to build the computer -- the U.K. plant has produced more than 500,000 Raspberry Pi units in a little more than six months, pumping out about 40,000 units each week from that facility alone. “In June, we scheduled 204 units per week. By July, that had climbed to 10,000 units per week. This month, we will achieve 38,000 output per week, and this is just the beginning,” said Gerald Kelly, general manager of Sony’s Pencoed plant. “The future is about higher volumes and accessories such as a camera board. Arduino Masterclass Part 3: TV weather channel Here’s what you’ll need to build our TV weather channel. Arduino Uno R3 board1kohm 0.5W metal film resistor470ohm 0.5W metal film resistor100ohm 0.5W metal film resistor4.7kohm 0.5W metal film resistorDHT11 temperature/humidity sensor1 x RCA socket (available from Jaycar or Altronics)2 x alligator test leads (only if you don’t wish to solder the RCA socket) So far the idea has been to show you how the Arduino Uno board and its Atmel ATMEGA328P microcontroller can interact fairly simply with the outside world. This time we’re simplifying the electronics but ratcheting up the demands on the microcontroller by aiming to hook up our Arduino Uno to the most complicated display output option available: television. Introducing composite video

mBot-Resource Download – Makeblock Academy mBot App mBot App is a free App that specifically designed for mBot robot. It’s an easy way for users to pair cellphone with mBot by bluetooth, we could play with mBot immediately, without programming and updating the firmware.What is mBot robot? mBot robot is a high cost performance, easy to run robot kit for students to achieve the STEM project.

Arduino Robot launches at Maker Faire, we go hands-on (video) There's a new kid on the Arduino block, and it's called the Arduino Robot. Launched yesterday at Maker Faire Bay Area, it's the company's first product that extends beyond single microcontroller boards. The Roomba-like design, which we first saw in November 2011, is the result of a collaboration with Complubot. SFE pour FT232RQ USB vers série - Electronique SparkFun Replacement: DEV-11814. This part has been upgraded to the µUSB-PA5, go check it out! This page is for reference only. Getting Started with ArduBlock DOWNLOAD Ardublock 1.Download ardublock-all.jar ArduBlock 2. In Arduino IDE, open menu “Arduino” -> “Preferences” 3. Cat Repelling PIR capteur de mouvement (secrète) alarme boîte de haut-parleur This is a PIR motion sensor device that works with the arduino uno. In order to make it covert enough to be placed in multiple settings and portable enough to fit most places, I decided to make the case for it appear as a speaker.The inspiration for this project: My cat is a jerk. One of his favorite things to do is to alarm me that he is hungry every morning at 4am by sitting on my dresser and knocking random things over until I wake up. Unfortunately, my dresser is also parallel to my craft table, so he has turned my dresser into a work of art by walking across my oil paintings and jumping up there (and also throughout the rest of the house).