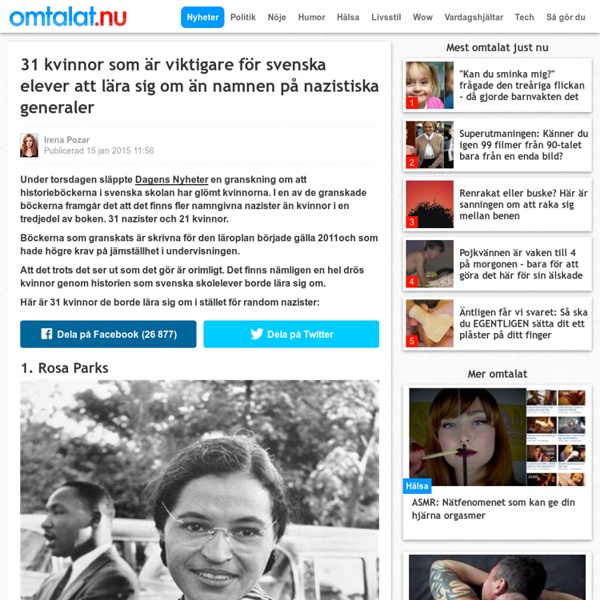 15 Badass Facts About Florence Nightingale You Never Knew Posted May 14, by Justine Figueroa You may think you've learned all you need to know about Florence Nightingale in history classes, but there's much more you could stand to learn. 1. She was fluent in English, French, German and Italian. You’ve got to have a dream: a free downloadable lesson A free downloadable lesson, based around a Russian advertising video for shampoo. Despite what is aims to sell, the video is actually quite inspiring, with the story of a girl who succeeds against the odds through pure grit and determination. Students start by watching the video and trying to guess what it is trying to advertise (so don’t tell them!).

Two Twins Talking In The Womb... Terms of Use Agreement By uploading any photographs and/or written materials including, without limitation, captions and stories (collectively, "My Materials"), I certify and acknowledge that I wholly own My Materials or have the sole and exclusive right to permit MyLifeYoga.com and its parents, members, managers, directors, shareholders, partners, representatives, subsidiaries, affiliates, sponsors, successors, assigns, heirs and licensees (collectively, "you" or "your") to use, edit, publish and otherwise exploit My Materials and my name in connection with My Materials without obligation or liability to me or any other party whatsoever. I represent and warrant that if any minors appear in My Materials, I am the mother, father or duly appointed guardian of such minors or have the irrevocable permission of the parents or duly appointed guardian(s) of such minors to grant the rights set forth herein to you on behalf of such minors. Privacy Policy

40 maps that explain the world By Max Fisher By Max Fisher August 12, 2013 Maps can be a remarkably powerful tool for understanding the world and how it works, but they show only what you ask them to. So when we saw a post sweeping the Web titled "40 maps they didn't teach you in school," one of which happens to be a WorldViews original, I thought we might be able to contribute our own collection. Some of these are pretty nerdy, but I think they're no less fascinating and easily understandable. A majority are original to this blog, with others from a variety of sources. The first sister of feminism In 1631, an exhausted 46-year-old woman arrived at the gates of the Vatican. Mary Ward, a Yorkshire-born nun, had walked more than 1,500 miles from her order in present-day Belgium to Rome, knowing that she might end up in prison. For more than two decades, she had been leading an order of devotees that lived in defiance of the Vatican's strict rules that confined nuns to their cloisters. Ward had taught her religious sisters not to wear habits and trained them to work with the poor and the persecuted, and to found and teach in Catholic schools.

BusyTeacher.org Mobile However, things are not as simple with teens. Most are very clever and insightful kids, but this is not exactly the most talkative age group. Have you ever faced a class full of blank stares where most of the replies you hear are “Yes”, “No”, or “It depends”? Det var en gång...Tidernas Äventyr 1-24 Upload Svenskt Galleri Loading... These 20 powerful photos of kids' bedrooms will change the way you look at the world Like us on FB: Where Children Sleep is a powerful photo series by English photographer James Mollison. He traveled around the world capturing the differences between the lifestyle of kids from different countries. The discrepancy is quite shocking, as in the series you will find photos of children like Kaya from Tokyo, whose mother spends more than $1.000 a month on her dresses, as well as photos of kids from Brazil or Nepal that barely have a roof over their heads. Save the Children Italy supported the two year long process needed to complete this series that now is also available as a book, where each portrait and bedroom photos are accompanied by an extended caption that tells the story of each child.

5 Foundational Writers in Women's History - Grammarly Blog Ruth Bader Ginsburg, Supreme Court justice and feminist, said, “I would like in my lifetime to see women get fired up about the Equal Rights Amendment.” Under the US Constitution, women are guaranteed the right to vote; the ERA would guarantee equal rights in all other areas of the law regardless of sex, but it isn’t part of the US Constitution yet. Ginsburg’s eighty-third birthday is on the 15th of March, which is also Women’s History Month, and the perfect time to ask: are we fired up yet?