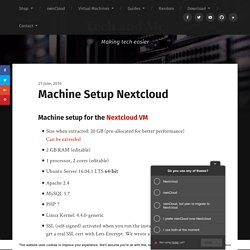 It’s also possible to get a real SSL cert with Lets Encrypt. We wrote a script for that that’s included in the VM.SSL headers is activated and configured for better security.Cron.php runs every 15 minutes.A random MySQL root password is generated when running the startup-script.Max upload is set to 1000 MB. Here is a guide if you want to change it. Please notice that nextcloud_update.sh automatically hashes out the default value in /var/www/nextcloud/.htaccess during update.Installation script included that takes care of the initial setup and change passwords.phpMyadmin is pre-installed for easier MySQL administration. It’s all depending on how many users you want to have.

Tech and Me will provide the offical VM for Nextcloud – Tech and Me. Well, much has happened these last couple of days to say the least. 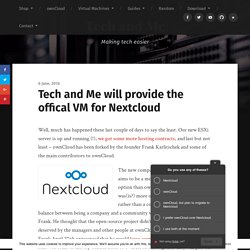 Our new ESXi server is up and running (!) , we got some more hosting contracts, and last but not least – ownCloud has been forked by the founder Frank Karlitschek and some of the main contributors to ownCloud. The new company is called Nextcloud and aims to be a more community friendly option than ownCloud are – as ownCloud was(is?) More organized as a company rather than a community, or that the balance between being a company and a community was uneven regarding to Frank. He thought that the open-source project didn’t quite got the attention it deserved by the managers and other people at ownCloud. Future So what about the future then?

Nextcloud + tech and me = true As most of the people that we at Tech and Me know since ownCloud went to Nextcloud, it also feels natural for us to come along and make Nextcloud great, *hrm hrm* even greater! More about all this in some of the future posts, but now you know the basics… Seafile. Deploy Seafile on Your Own Server Pricing of Pro Edition license (yearly subscription) Note: $100 in total for 9 users is a special offer for small businesses. 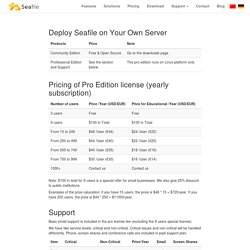 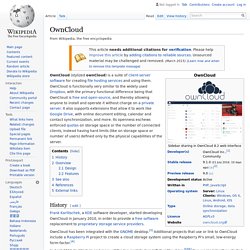 OwnCloud has been integrated with the GNOME desktop.[3] Additional projects that use or link to OwnCloud include a Raspberry Pi project to create a cloud storage system using the Raspberry Pi's small, low-energy form-factor.[4] In April 2016 Karlitschek and many of the top contributors left OwnCloud Inc.[5][6] Five weeks later they started Nextcloud, a fork of OwnCloud.[7] Overview[edit] Design[edit] The OwnCloud server is written in the PHP and JavaScript scripting languages. 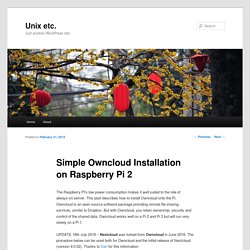 This post describes how to install Owncloud onto the Pi. Owncloud is an open source software package providing remote file sharing services, similar to Dropbox. But with Owncloud, you retain ownership, security and control of the shared data. Owncloud works well on a Pi 2 and Pi 3 but will run very slowly on a Pi 1. UPDATE 16th July 2016 – Nextcloud was forked from Owncloud in June 2016. My Raspberry Pi 2 was purchased from RS Components in the UK. NOTE: The below procedure describes how to install Owncloud version 9.0.1, the latest version at the time of writing (26th April 2016), but it should work for later/future versions too. MultCloud: Best Solution to Migrate Evernote to ownCloud. Evernote is a mighty note taking application that used to capture ideas, images and so on. 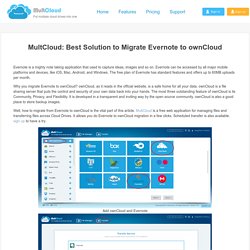 Evernote can be accessed by all major mobile platforms and devices, like iOS, Mac, Android, and Windows. The free plan of Evernote has standard features and offers up to 60MB uploads per month. Why you migrate Evernote to ownCloud? OwnCloud, as it reads in the official website, is a safe home for all your data. ownCloud is a file sharing server that puts the control and security of your own data back into your hands.