Victoria Falls. Ictoria Falls presents a spectacular sight of awe-inspiring beauty and grandeur on the Zambezi River, forming the border between Zambia and Zimbabwe. 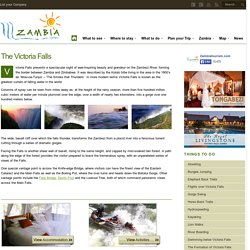 It was described by the Kololo tribe living in the area in the 1800’s as ‘Mosi-oa-Tunya’ – ‘The Smoke that Thunders’. In more modern terms Victoria Falls is known as the greatest curtain of falling water in the world. Columns of spray can be seen from miles away as, at the height of the rainy season, more than five hundred million cubic meters of water per minute plummet over the edge, over a width of nearly two kilometers, into a gorge over one hundred meters below. The wide, basalt cliff over which the falls thunder, transforms the Zambezi from a placid river into a ferocious torrent cutting through a series of dramatic gorges. Facing the Falls is another sheer wall of basalt, rising to the same height, and capped by mist-soaked rain forest. Zimbabwe's Victoria Falls - Wild Africa - BBC. Galápagos Islands. Galápagos Islands Situated in the Pacific Ocean some 1,000 km from the South American continent, these 19 islands and the surrounding marine reserve have been called a unique ‘living museum and showcase of evolution’. 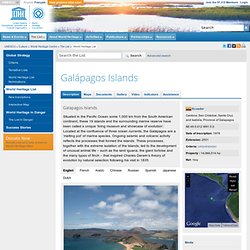 Located at the confluence of three ocean currents, the Galápagos are a ‘melting pot’ of marine species. Ongoing seismic and volcanic activity reflects the processes that formed the islands. These processes, together with the extreme isolation of the islands, led to the development of unusual animal life – such as the land iguana, the giant tortoise and the many types of finch – that inspired Charles Darwin’s theory of evolution by natural selection following his visit in 1835. Îles Galápagos Situées dans l’océan Pacifique, à environ 1000 km du continent sud-américain, ces dix-neuf îles et la réserve marine qui les entoure constituent un musée et un laboratoire vivants de l’évolution uniques au monde. 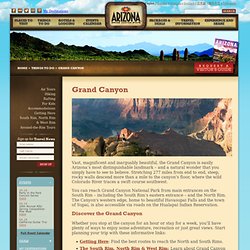 Stretching 277 miles from end to end, steep, rocky walls descend more than a mile to the canyon’s floor, where the wild Colorado River traces a swift course southwest. You can reach Grand Canyon National Park from main entrances on the South Rim – including the South Rim’s eastern entrance – and the North Rim. The Canyon's western edge, home to beautiful Havasupai Falls and the town of Supai, is also accessible via roads on the Hualapai Indian Reservation.

Discover the Grand Canyon Whether you stop at the canyon for an hour or stay for a week, you’ll have plenty of ways to enjoy some adventure, recreation or just great views. Getting Here: Find the best routes to reach the North and South Rims.The South Rim, North Rim & West Rim: Learn about Grand Canyon National Park's three distinct experiences. For More Information. National Geographic. Uluru (Ayers Rock) Australia. Ayers Rock is one of the most impressive landmarks in Australia. 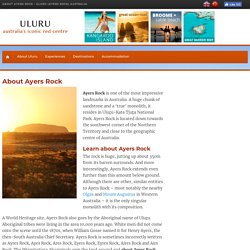 A huge chunk of sandstone and a ‘true’ monolith, it resides in Uluru-Kata Tjuta National Park. Ayers Rock is located down towards the southwest corner of the Northern Territory and close to the geographic centre of Australia. Learn about Ayers Rock The rock is huge, jutting up about 350m from its barren surrounds. And more interestingly, Ayers Rock extends even further than this amount below ground.

A World Heritage site, Ayers Rock also goes by the Aboriginal name of Uluru. Uluru (Ayers Rock); 10 Things To Do When You're There. The Great Barrier Reef - a world heritage listed, natural inspiration. Dive into the Great Barrier Reef : Video. Rainforest Tourism - Save the Amazon Rainforest. Tourism in the Amazon rainforest is increasing, although it doesn’t play a major role in the economic life of the region. 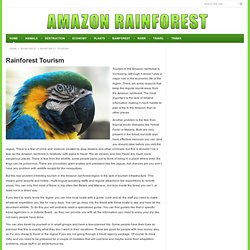 There are some reasons that keep the regular tourist away from the Amazon rainforest. The most important is the lack of reliable information making it much harder to plan a trip to the Amazon than to other places. Another problem is the fear from tropical exotic diseases like Yellow Fever or Malaria. Both are very present in the forest, but both also have effective vaccines you can (and you should) take before you visit the region. There is a fear of crime and violence created by drug dealers and other criminals, but this is shouldn’t be a fear, as the Amazon rainforest is relatively safe place to travel. Learning Zone Class Clips - Postcard from the Amazon rainforest - SEN Video. Packages, Hotels, Attractions & Info. Niagara Falls Tour.