Processors - Limit Number Used by Windows 7. I wanna uninstall the useless programs on my new dell inspiron, but i dont know which ones i should. help plz. New laptop behaving badly... Windows 7 troubleshooting tools and tips. Figuring out the cause of a problem is often the hardest part of troubleshooting, but by itself it doesn't do you much good. 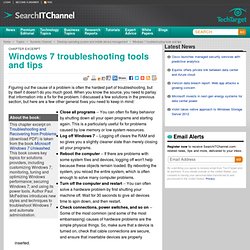 When you know the source, you need to parlay that information into a fix for the problem. I discussed a few solutions in the previous section, but here are a few other general fixes you need to keep in mind: Close all programs -- You can often fix flaky behavior by shutting down all your open programs and starting again.

This is a particularly useful fix for problems caused by low memory or low system resources. Log off Windows 7 -- Logging off clears the RAM and so gives you a slightly cleaner slate than merely closing all your programs. More Troubleshooting Tools Running the Windows 7 Troubleshooters Windows Vista introduced the idea of the troubleshooter, a Help system component that offered a series of solutions that led you deeper into a problem in an attempt to fix it. FIGURE 21.6 Click a category to see its available troubleshooters.

What is mscorsvw.exe and why is it eating up my CPU? What is this new CLR Optimization Service? - David Notario's WebLog. [Update – 8/2013] Please refer to our more recent post: Wondering why mscorsvw.exe has high CPU usage? 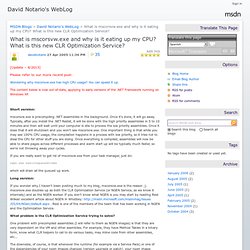 You can speed it up. The content below is now out-of-date, applying to early versions of the .NET Framework running on Windows XP. Short version: mscorsvw.exe is precompiling .NET assemblies in the background. If you are really want to get rid of mscorsvw.exe from your task manager, just do: ngen.exe executequeueditems which will drain all the queued up work. Long version: If you wonder why I haven't been posting much to my blog, mscorsvw.exe is the reason ;). mscorsvw.exe doubles up as both the CLR Optimization Service (or NGEN Service, as we know it internally) and as the NGEN worker.

What problem is the CLR Optimization Service trying to solve? One problem with precompiled assemblies (I will refer to them as NGEN images) is that they are very dependent on the VM and other asemblies. How does the CLR Optimization Service work? There's 2 ways of waking up the service: System Interrupts Huge CPU Usage. Found this helpful 1 After you installed Win7, did you then install all the Win7 drivers for your hardware? 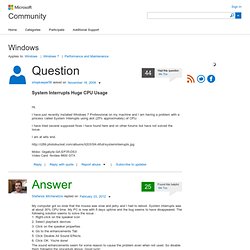 If not, that's your next step. What is svchost.exe? Process Monitor. I'm getting severe CPU spikes and lag after performing a Windows. Hi. 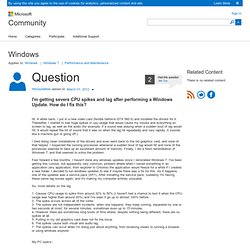 A while back, I put in a new video card (Nvidia Geforce GTX 560 ti) and installed the drivers for it. Thereafter, I started to see huge spikes in cpu usage that would cause my mouse and everything on screen to lag, as well as the audio (for example, if a sound was playing when a sudden bout of lag would hit, it would repeat the bit of sound that it was on when the lag hit repeatedly and very rapidly. It sounds like a machine gun is going off.)

I tried doing clean installations of the drivers and even went back to the old graphics card, and none of that helped. I inspected the running processes whenever a sudden bout of lag would hit and none of the processes seemed to take up an exorbitant amount of memory. Fast forward a few months. So, more details on the lag: Error 1719 windows installer service could not be accessed .... I've had most of the same problems in this thread. 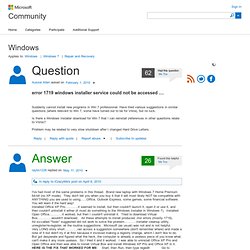 Brand new laptop with Windows 7 Home Premium 64-bit (no XP mode). They don't tell you when you buy it that it will most likely NOT be compatible with ANYTHING you are used to using......Office, Outlook Express, some games, some financial software. You will learn it the hard way! Installed Office XP Pro.............it seemed to install, but then couldn't launch it, open it or use it, and then couldn't uninstall it either (it must do something to the Windows Installer in Windows 7). Windows SDK Components for Windows Installer Developers. How to troubleshoot problems when you install or uninstall programs on a Windows-based computer. When you install, uninstall, or update a program on a Windows-based computer, you may receive one of the following error messages: Error message 1 The Windows Installer Service could not be accessed. 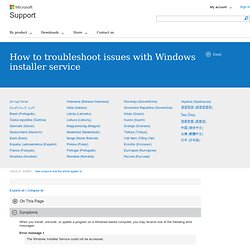 Error message 2 Windows Installer Service couldn’t be started. Error message 3 Could not start the Windows Installer service on Local Computer. The installation or uninstallation process of a program can fail for several reasons. Fix the problem automatically Fix the problem manually To resolve these kinds of issues, follow the steps listed below: Collapse this imageExpand this image Important You must log on to the computer by using an administrator account. In Windows XP or in Windows Server 2003 In Windows Vista or in Windows 7 Open the Date and Time dialog box.Click Start.Type the following command in the Start Search box or in the Search programs and files box, and then press ENTER:timedate.cplThe Date and Time dialog box opens.

Error 1719 windows installer service could not be accessed ....