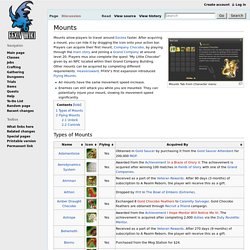 After acquiring a mount, you can ride it by dragging the icon onto your action bar. Players can acquire their first mount, Company Chocobo, by playing through the main story and joining a Grand Company at around level 20. Players mus also complete the quest "My Little Chocobo" given by an NPC located within their Grand Company Building. Other mounts can be acquired by completing different requirements. All mounts have the same movement speed increase. Types of Mounts Flying Mounts Flying mounts are introduced in Heavensward, revealed at the Fan Festival in London 2014. You can escape enemies on the ground by flying. Unlock Players can unlock flying mounts through the Main Scenario Quest Divine Intervention. If you lose your Compass you can talk to Gibrillont at the Forgotten Knight to get a new one.

Controls After attuning to a zone, press the jump key while riding a flying mount to fly. Gyshal Greens Location. Chocobo Companion GE. [edit] Experience Points Your chocobo will max out its level when it reaches rank 10. 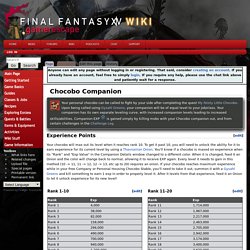 To get it past 10, you will need to unlock the ability for it to earn experience for its current level by using a Thavnairian Onion. You'll know if a chocobo is maxed on experience when its "Rank" and "Exp Value" in the Companion Details window changed to a different color. When it is changed, feed it an Onion and the color will change back to normal, allowing it to receive EXP again. Every level it needs to gain in this method (10 -> 11, 11 -> 12, 12 -> 13, etc up to 20) requires an onion. [edit] Commands [edit] Skills Killing mobs with your Chocobo grants Companion EXP , which leads to increased ranks. 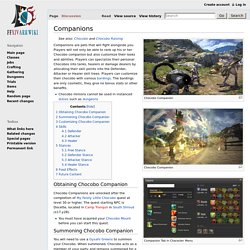 Players will not only be able to rank up his or her Chocobo companion but also customize their looks and abilities. Chocobo minions cannot be used in instanced duties such as dungeons Obtaining Chocobo Companion Chocobo Companions are unlocked after the completion of My Feisty Little Chocobo quest at level 30 or higher. You must have acquired your Chocobo Mount before you can start this quest.

Summoning Chocobo Companion You will need to use a Gysahl Greens to summon your Chocobo. Gysahl Greens can be purchased for 36 gil each from Maisenta <Black Raddit Traders> (X:11,Y:11) in New Gridania, Roarich <Independent Importer> (X:10, Y:9) in Ul'dah - Steps of Nald and Bango Zango <Brugaire Consortium> (X:9, Y:11) in Limsa Lominsa Lower Decks. Chocobo Dyeing. Chocobo Dyeing is the most common name attributed by players to the system of coloring the plumage of Chocobo Companions by feeding them certain snacks. 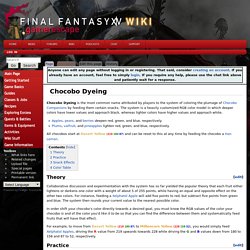 The system is a heavily customized RGB color model in which deeper colors have lower values and approach black, whereas lighter colors have higher values and approach white. Apples, pears, and berries deepen red, green, and blue, respectively. Plums, valfruit, and pineapples lighten red, green, and blue, respectively. All chocobos start at Desert Yellow (219 180 87) and can be reset to this at any time by feeding the chocobo a Han Lemon. [edit] Theory Collaborative discussion and experimentation with the system has so far yielded the popular theory that each fruit either lightens or darkens one color with a weight of about 5 of 255 points, while having an equal and opposite effect on the other two colors. [edit] Practice There do appear to be some randomized elements built into the system, though how they work is poorly understood.