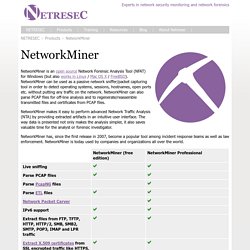 NetworkMiner can be used as a passive network sniffer/packet capturing tool in order to detect operating systems, sessions, hostnames, open ports etc. without putting any traffic on the network. NetworkMiner can also parse PCAP files for off-line analysis and to regenerate/reassemble transmitted files and certificates from PCAP files. NetworkMiner makes it easy to perform advanced Network Traffic Analysis (NTA) by providing extracted artifacts in an intuitive user interface. The way data is presented not only makes the analysis simpler, it also saves valuable time for the analyst or forensic investigator. 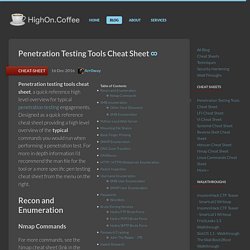 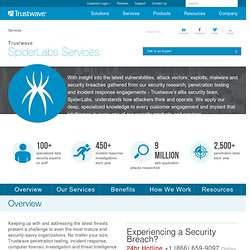 Industry-Leading Research In addition, our expert staff contributes to and develops community-revered tools such as those hosted at our GitHub project page or open-source initiatives such as ModSecurity, the most widely deployed Web Application Firewall (WAF) in the world; the OWASP ModSecurity Core Rule Set Project and the Web Application Security Consortium (WASC) Web Hacking Incident Database (WHID). Standardized Methodologies Unlike other providers, Trustwave can give you access to a personal information security advisor, serving as your one-on-one contact to help you better design security to keep your business safe and ensure that you have the technologies and tools you need to meet your future business goals. WriteLaTeX. Free DNS, Static DNS, Dynamic DNS, URL Redirection, and more from EveryDNS! 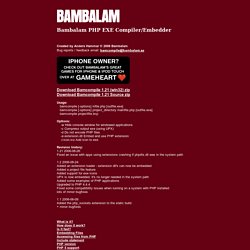 Welcome to the Tomato USB web site - TomatoUSB. Password recovery, forensic, forensics, system and security software from ElcomSoft : recover or reset lost or forgotten password, remove protection, unlock system. Twisted Matrix Laboratories: Twisted 10.2.0 Released! Twisted 10.2.0, the third Twisted release of 2010, has emerged from the mysterious depths of Twisted Matrix Labs, as so many releases before it. 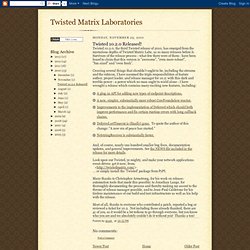 Survivors of the release process - what few there were of them - have been heard to claim that this version is "awesome", "even more robust", "fun-sized" and "oven fresh". Crossing several things that shouldn't ought to be, including the streams and the rubicon, I have assumed the triple responsibilities of feature author, project leader, and release manager for 10.2: with this dark and terrible power - a power which no man ought to wield alone - I have wrought a release which contains many exciting new features, including: And, of course, nearly one hundred smaller bug fixes, documentation updates, and general improvements. See the NEWS file included in the release for more details. Look upon our Twisted, ye mighty, and make your network applications event-driven: get it now, from: < ... or simply install the 'Twisted' package from PyPI.