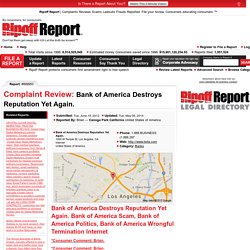 Beware and proceed with EXTREME Caution. As a new employee to the banking system, I excelled among the top 25% of employees, month after month. I recently achieved a reward for top referrals among 25 hires. From day one, my experience with Bank of America manager Michael T has been a grueling disaster of disrespect and malpractice. Why temporarily reward your team with candy bars and then punish them ten minutes later? From racial slurs such as repeatedly calling a certain Hispanic employee "Senor" to unnecessary write ups that effect future career placement and incentive bonuses within this company, his lack of personal skills and professionalism should be examined thoroughly.

Age Discrimination Case Against Bank Of America - BrokeAndBroker.com by Bill Singer, 917-520-2836. Notwithstanding the relatively rosier employment picture of recent months (and there are still many thorns hidden in that employment data), the legacy of business failures, bankruptcies, and layoffs from the Great Recession is still with us and serves as the motivation behind many ongoing employment lawsuits. 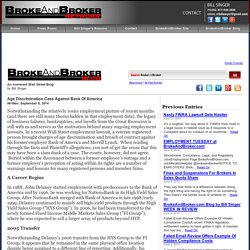 In a recent Wall Street employment lawsuit, a veteran registered person brought charges of age discrimination and breach of contract against his former employer Bank of America and Merrill Lynch. When reading through the facts and Plaintiff's allegations, you sort of get the sense that this may have been a slam dunk of a case. The courts, however, did not agree. Age Discrimination Case Against Bank Of America - BrokeAndBroker.com by Bill Singer, 917-520-2836. California court overturns $3.8M verdict in wrongful termination case. A California appeals court overturned a $3.8 million jury verdict awarded to a former Countrywide Financial Corp. human resources executive who claimed he was wrongfully terminated when Bank of America Corp. took over Countrywide in part because of his whistle-blowing activities. 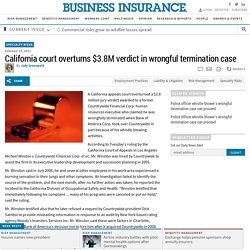 According to Tuesday's ruling by the California Court of Appeals in Los Angeles Michael Winston v. Countrywide Financial Corp. et al., Mr. Winston was hired by Countrywide to assist the firm in its executive leadership development and succession planning in 2005. Mr. Winston said in July 2006, he and several other employees in his work area experienced a burning sensation in their lungs and other symptoms. Mr. Bank of America to freeze pension plan - Feb. 23, 2012. Bank of America had roughly 282,000 full-time employees as of December. 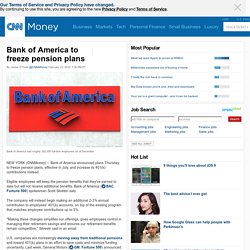 NEW YORK (CNNMoney) -- Bank of America announced plans Thursday to freeze pension plans, effective in July, and increase its 401(k) contributions instead. Eligible employees will keep the pension benefits that they've earned to date but will not receive additional benefits, Bank of America (BAC, Fortune 500) spokesman Scott Silvestri said. The company will instead begin making an additional 2-3% annual contribution to employees' 401(k) accounts, on top of the existing program that matches employee contributions up to 5%. "Making these changes simplifies our offerings, gives employees control in managing their retirement savings and ensures our retirement benefits remain competitive," Silvestri said in an email.

U.S. companies are increasingly moving away from traditional pensions and toward 401(k) plans in an effort to save costs and minimize funding uncertainty. Bank of America Employee RIF'd at 56 Lacks Age Bias Claim, 2d Circuit Affirms. September 10, 2014 ByKevin McGowan. 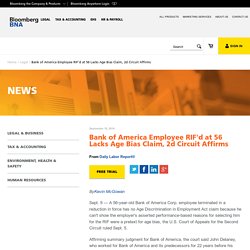 Jackie Ramos, Bank Of America Employee, Fired After Helping Customers. Bank of America fired Jackie Ramos after she took a stand against the bank's $15 "convenience" charges and $39 over-the-limit fees so she could sleep better at night. 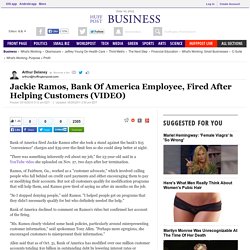 "There was something inherently evil about my job," the 23-year-old said in a YouTube video she uploaded on Nov. 27, two days after her termination. Ramos, of Fairburn, Ga., worked as a "customer advocate," which involved calling people who fall behind on credit card payments and either encouraging them to pay or modifying their accounts. But not all customers qualify for modification programs that will help them, and Ramos grew tired of saying no after six months on the job. "So I stopped denying people," said Ramos. "I helped people get on programs that they didn't necessarily qualify for but who definitely needed the help. " Texas Wrongful Termination Laws. Have you recently lost your job? 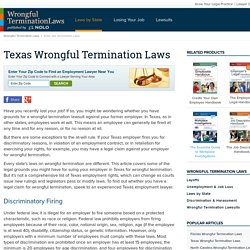 If so, you might be wondering whether you have grounds for a wrongful termination lawsuit against your former employer. In Texas, as in other states, employees work at will. This means an employee can generally be fired at any time and for any reason, or for no reason at all. But there are some exceptions to the at-will rule. If your Texas employer fires you for discriminatory reasons, in violation of an employment contract, or in retaliation for exercising your rights, for example, you may have a legal claim against your employer for wrongful termination. Every state’s laws on wrongful termination are different.

Discriminatory Firing Under federal law, it is illegal for an employer to fire someone based on a protected characteristic, such as race or religion. Rollingstone. By Matt Taibbi | At least Bank of America got its name right. 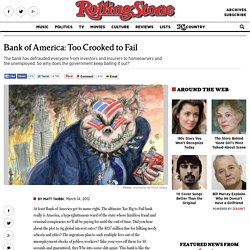 The ultimate Too Big to Fail bank really is America, a hypergluttonous ward of the state whose limitless fraud and criminal conspiracies we'll all be paying for until the end of time. Did you hear about the plot to rig global interest rates? The $137 million fine for bilking needy schools and cities? Bank Of America Hoping To Fire Thousands Of Employees In Record Time. Remember Project New BAC, i.e. 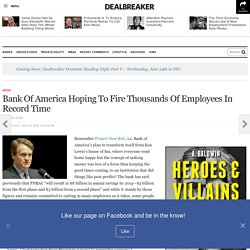 Bank of America’s plan to transform itself from Ken Lewis’s house of fun, where everyone went home happy but the concept of making money was less of a focus than keeping the good times coming, to an institution that did things like post profits? The bank has said previously that PNBAC “will result in $8 billion in annual savings by 2015—$5 billion from the first phase and $3 billion from a second phase” and while it stands by those figures and remains committed to cutting as many employees as it takes, some people would like them to be a bit snappier about it.