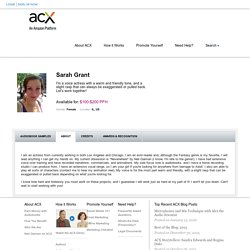 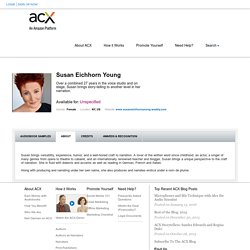 A lover of the written word since childhood, an actor, a singer of many genres from opera to theatre to cabaret, and an internationally renowned teacher and blogger, Susan brings a unique perspective to the craft of narration. She is fluid with dialects and accents as well as reading in German, French and Italian. Along with producing and narrating under her own name, she also produces and narrates erotica under a nom de plume. Secrets of the Red Box - Vickie HallLove is in the Air - Devon Vaughn ArcherRouge Volume 1 - Leigh Talbert MooreAmsterdam 2012 - Ruth FranciscoThe Nameless One - Kathryn Meyer GriffithAs I Fade Book 1 - Leilani Bennett As I Breathe Book 2 - Leilani BennettCrimson Rush - Lorraine KennedyMoon Dance Volumes 1 - 4 - Lorraine KennedyDark Rider - Lorraine KennedyInvisible Magic (Book 1 of Invisible Recruits) - Mary Buckham.

Acx. Paige grew up in a small town in North Carolina, but always had dreams larger than her mountain home. 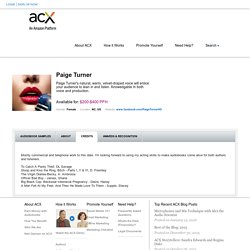 A storyteller from a young age, Paige would often recite commercials, movie dialogue or read books aloud to her family. This is how she learned to drop her endearing accent. She can, however get it back on command for your storytelling needs. Now Paige is all grown up and she knows what she wants. Let her warm tones and engaging style hook listeners from the beginning. ***Please Note***Paige is only accepting RS projects for short stories, usually one hour or less.

Mostly commercial and telephone work to this date. Acx. I am an experienced narrator with passion for my craft and a desire to communicate the author's intent in all aspects of my performance. 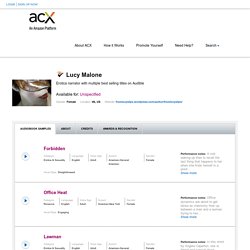 My narration voice can be smooth and sultry or sweet and innocent...whatever the project requires. Many of my titles have been #1 bestsellers for erotica on Audible. The majority of my work comes from those I have worked with in the past who know they can count on me for top quality, consistent narration from start to finish. Lily Horne. Acx. Warm, sincere narrator with production studio. 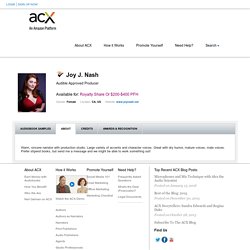 Large variety of accents and character voices. Great with dry humor, mature voices, male voices.Prefer stipend books, but send me a message and we might be able to work something out! Acx. I am an Audible Approved Producer. 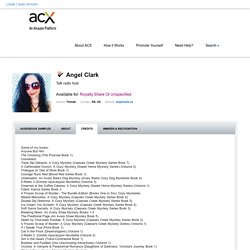 As a talk radio host, I speak for a living. I have good diction with the typical American accent. I can do a good southern accent as well. Acx. I am an actress and voice over artist who LOVES to read. 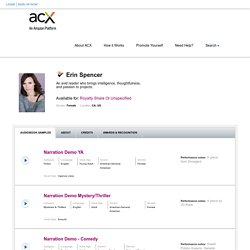 I have studied with Pat Fraley and Kathe Mazur, doing Scott Brick's method. I have done lots of commercial, industrial videos, promo, instructional video, and shorts and over 30 audiobooks! Acx. Lauren Fortgang lives in New York City where she works as an actor and voice over artist. 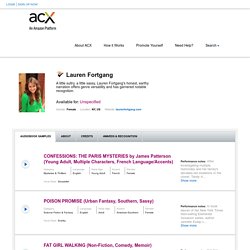 Acx. A voice-over pro with over 10 years experience in the industry, Josh is able to provide author's with a quick turnaround on their project from his state of the art home studio in Denver, CO. 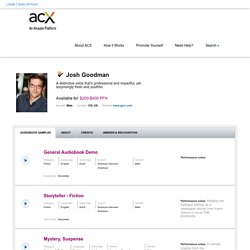 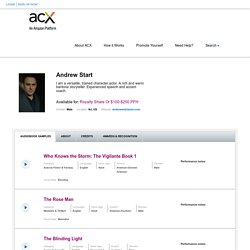 Currently we have eight narrators on staff, male and female, along with a copy editor and an audio engineer/producer. The Dead series by TW BrownSpindown by George Wright PadgettOutbreak One: Washington Territory (The Walker Chronicles), by Jason KristopherThe Strong Witch Society: The Diary of Mary Bliss Parsons by DH ParsonsMy Ashes of Dead Lovers Garage Sale by Marilyn Celeste Morris, The Dying of the Light; Interval, by Jason KristopherBut For You by Mary CalmesAn Isolated Range by Andrew GreyWorth the Coming Home by Lisa OwensMorning Report by Sue BrownFrat House Troopers by Xavier MayneAn Unconventional Courtship by Scotty CadePlan B by SJD PetersonZomblog: Snoe's War by T.W.

BrownSolar Energy by Ade AsefesoStrange Tales: A Five Story Collection by Dale T. Bravo, Mr. Acx. Dark Night Sound is a new up and coming sound studio, with years of experience and talent behind it from its' sister studio, Falcon Sound Company. We are aggressively seeking projects to fill our catalog and if chosen for your project, we will give your book our full, undivided, attention to produce on time, and with 100% quality work through and through. Narrators on staff: Nick J. Russo Fauna Nyx Rosko RainesDorian BaneMarius Wayne Excerpts from good reviews: Acx. Acx. Acx. Marcio is an American performer with more than 20 years of experience as an actor, voice actor, spokesperson, model, stuntman and writer.

Some of his credits include "Iron Man 2”, "Down and Dangerous", "Dexter", "Sons of Anarchy" and “Greek.” He's worked for Universal Studios, Warner Brothers, Paramount Pictures, Disney, SONY, Nickelodeon, 20th Century FOX, ABC, NBC and CBS as well having doubled/stood in for actors Tom Cruise and George Clooney for the 2012 Academy Awards (OSCARS) opening ceremony video. Acx. Thanks for considering me. I got my start doing voice work about eight years ago and have been having a blast since then. I read everything I can get my hands on these days aloud and I product approximately two and a half hours of my own audio content a week (taking the form of short stories, erotica and a podcast or two). I've got the gift of gab and I want to use it as much as possible. If you select me you can rest assured that I will fulfill your contract with excitement, experience and excellence.

I will do my best to make you happy. Acx. Dennis Logan is a narrator and recording engineer who transitioned from music production to audiobook production after a decade of running a recording studio. Catherine Jandrain. Acx. Acx. Acx. In additional to narration, I am a regular performer with TEN31 Productions (www.wemakepretend.com), where I perform as a living statue at a wide variety of events, including Providence Waterfire.

I can occasionally be found working with Epic Theatre Company or The Community Players, Rhode Island community theaters which offer classic, contemporary and original unpublished works. I would also love to produce your audio book. Audition requests are welcome, but can be frequent. Royalty share offers are welcome, but priority is given to projects which are stipend eligible. The Truth About Fairy Tales (Heart of Texas) by Mary Eason Magic of Thieves by C. Betrayal of Thieves by C. Circle of Thieves by C. Redemption of Thieves by C. Sworn To Raise: Courtlight #1 by Terah Edun. Acx. I am a voice actor who specializes in romance/erotica. Acx. I've now done many full length audiobooks (thank you ACX!).