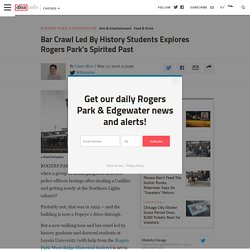 Probably not, that was in 1924 — and the building is now a Popeye's drive-through. But a new walking tour and bar crawl led by history graduate and doctoral students at Loyola University (with help from the Rogers Park/West Ridge Historical Society) is set to explore just that: the people, places and things about Rogers Park that have shaped the neighborhood and its liquor laws today. "Rogers Park for the longest time was very dry, and the boundaries of Rogers Park were sort of this battleground between the tavern-keepers and the prohibitionists," said Matthew Amyx, a doctoral student in Loyola's history program.

Big-money investors land at Chicago Venture Summit. More than 200 venture capitalists with billions of dollars to invest descended on Chicago on Thursday, seeking connections that could lead to more riches. 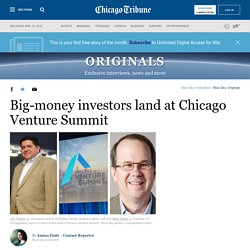 The second Venture Summit convened at Google's West Loop office, connecting venture capitalists from nearly 150 firms with about 200 local entrepreneurs. Investments don't happen on the spot, but the goal is to boost interest in Chicago startups, said organizer Mark Tebbe ⇒, chairman of ChicagoNext, Mayor Rahm Emanuel's tech council. It was a day filled with panels showcasing Chicago's finest: Chris Gladwin ⇒ of Cleversafe, which recently sold to IBM for more than $1 billion; Shradha Agarwal ⇒ of fast-growing ContextMedia; and Caralynn Collens ⇒ of UI Labs, which is aiming to transform digital manufacturing, among other things. Another nine startups gave quick pitches. Attendees from across the country also devoted serious time to private meetings in Google's bright halls and on its patio. Billionaire J.B. Here's what some of them said. 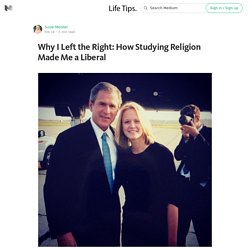 Bush’s inaugural ball. I had spent months campaigning for him, and it had not been easy. After the Florida electoral debacle complete with “hanging chads,” Katherine Harris (and her fifteen minutes of shame), and ultimately the Supreme Court’s Bush v. Gore decision, I was finally enjoying the fruits of my labor as I celebrated the new president that I worked to get elected. My role in the campaign wasn’t glamorous, but I was a twenty-year-old political science, religious studies double major who saw this election as the beginning of my work for the Right. During the campaign, I attended Young Republican meetings, drove Bush’s trusted advisors, Andrew Card and Karen Hughes, in the motorcade when they came to town, and now I was working the inaugural ball as the celebrity handler for special guest, Drew Carey.

Learning & Mind & Brain. James Fallows Journeys Across America. When news broke late last year of a mass shooting in San Bernardino, California, most people in the rest of the country, and even the state, probably had to search a map to figure out where the city was. 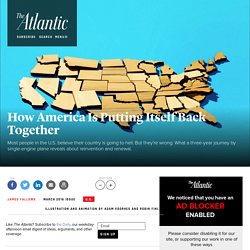 I knew exactly, having grown up in the next-door town of Redlands (where the two killers lived) and having, by chance, spent a long period earlier in the year meeting and interviewing people in the unglamorous “Inland Empire” of Southern California as part of an ongoing project of reporting across America. Some of what my wife, Deb, and I heard in San Bernardino before the shootings closely matched the picture that the nonstop news coverage presented afterward: San Bernardino as a poor, troubled town that sadly managed to combine nearly every destructive economic, political, and social trend of the country as a whole.

San Bernardino went into bankruptcy in 2012 and was only beginning to emerge at the time of the shootings. As a whole, the country may seem to be going to hell. President Obama Could Have Topped 'Mama' Joke With 'That's What She Said' - Downtown. View Full Caption Getty CHICAGO — President Barack Obama came to Illinois Wednesday to push for more civility and cooperation in politics, and he did it with grace, humor and a pretty decent “mama” joke. 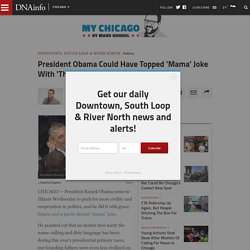 He pointed out that no matter how nasty the name-calling and dirty language has been during this year’s presidential primary races, our founding fathers were even less civilized on the campaign trail. “Thomas Jefferson’s opponent insisted he was a Muslim.