The Aquaculturists: 30/07/2014: Oily fish helps reduce your carbon footprint - slightly. Mackerel, herring, sardines and anchovies are amongst the most energy efficient in protein production, according to a research paper published in the journal Fish and Fisheries. The energy the researchers refer to is the fuel used to operate fishing boats. They point out that it takes on average just five gallons of diesel to catch a tonne of these fish while to catch an equivalent weight of lobster or shrimp takes five times as much.

The work by Robert Parker a PhD student from Nova Scotia and Peter Tyedmers, director of School for Resources and Environmental Studies at Dalhousie University in Halifax, Canada, also suggest that the inefficiency of protein production for human food consumption is compounded when we feed these oily fish to livestock and in aquatic feeds. Broody octopus keeps record-breaking four-year vigil. 30 July 2014Last updated at 14:01 ET By Jonathan Webb Science reporter, BBC News The octopus tended her 160 eggs at a depth of 1.4km, keeping dirt away and flushing them with fresh water For four years and five months, she clung to the rock and guarded her eggs. 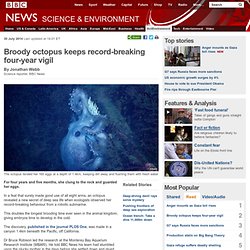 In a feat that surely made good use of all eight arms, an octopus revealed a new secret of deep sea life when ecologists observed her record-breaking behaviour from a robotic submarine. This doubles the longest brooding time ever seen in the animal kingdom, giving embryos time to develop in the cold. The discovery, published in the journal PLOS One, was made in a canyon 1.4km beneath the Pacific, off California. Dr Bruce Robison led the research at the Monterey Bay Aquarium Research Institute (MBARI). She was heading, slowly, for a known brooding site. 23/08/2013: Assessing EU aquaculture production; fishery and aquaculture delays in Bulgaria; coriander-fed fish. Global consumption of seafood has risen dramatically over the last decade, due to a growing population, increased affluence and changing eating habits - many now see seafood as a healthy alternative to meat. 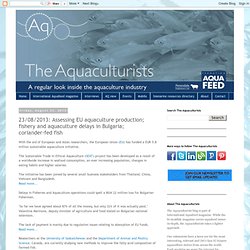 The EU is the largest single regional importer, with many of its imports coming from Asia. Read more at: With the aid of European and Asian researchers, the European Union (EU) has funded a EUR 5.8 million sustainable aquaculture initiative. The Sustainable Trade in Ethical Aquaculture (SEAT) project has been developed as a result of a worldwide increase in seafood consumption, an ever increasing population, changes in eating habits and higher salaries. The initiative has been joined by several small business stakeholders from Thailand, China, Vietnam and Bangladesh. IAF article: Dominique P Bureau column. Dominique P Bureau, a member of the International Aquafeed editorial panel, shares his thoughts on nutrient requirements.

In a context of significant competition and low profit margins, aquaculture feed manufacturers are required to formulate to increasing lower or narrower nutritional specifications (‘specs’) in order to minimize feed cost. Decreasing specs for certain nutrients can significantly reduce the cost of feeds. However, at the same time, feed manufacturers must be sure that their feeds can sustain high growth, feed efficiency, health, and product quality. 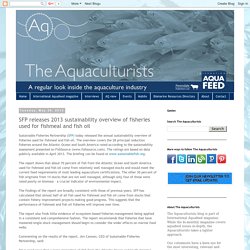 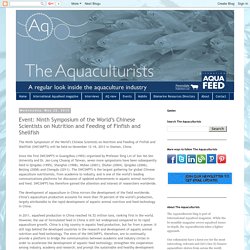 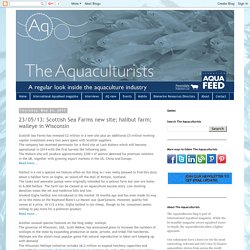 The company has received permission for a third site at Loch Kishorn which will become operational in 2014 with the first harvest the following year. The Kishorn site will produce approximately 2200 t of salmon destined for premium retailers in the UK, together with growing export markets in the US, China and Europe. Halibut is a not a species we feature often on this blog so I was really pleased to find this story about a halibut farm on Gigha, an island off the Mull of Kintyre, Scotland.

The tanks and seawater pumps were originally intended for a salmon farm but now are home to 6,000 halibut. The farm can be classed as an aquaculture success story.