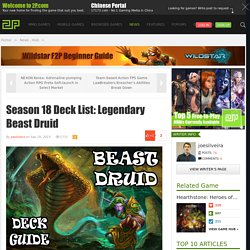 New archetypes like Dragon Priest and Secret Paladin have completely altered the game while old standbys like the Patron Warrior have endured (and even prospered) with the release of over 130 new cards. Unfortunately, many of the new TGT cards have not panned out to be as dominate as preceding expansions and the new mechanics Joust and Inspire look to be place cards for future Hearthstone endeavors. TGT is still an auspicious game though, with dozens of cards, combinations, and archetypes that have yet to be discovered. The_FunkMaster’s Beast Druid deck is just that, it uses a plethora of new and unused cards to breathe light into an already existing archetype. Combo Druid has been a consistent and strong deck for a long time and this Beast Druid takes that skeletal outline to create a fun and successful new prototype.

Deck Guide - *TGT* Aviana Druid by RegisKillbin - Hearthstone: Heroes of Warcraft - news. Most Druid decks these days are all about the big combo finisher with Force of Nature and Savage Roar, but if you're looking for a potent Druid that doesn't rely on two cards to win every game, this deck will interest you. 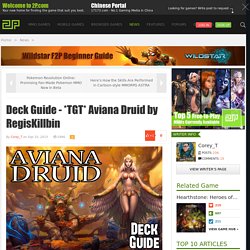 The Aviana Druid is a ramp-style deck that's full of huge minions, has tons of potential for crazy plays, and might just be one of the most fun decks I've ever played. If you're able to draw Aviana, the potential for insane plays jumps through the roof. At her very worst Aviana's effect allows her to be combined with any other minion for a 10-mana play that grants you two big bodies. 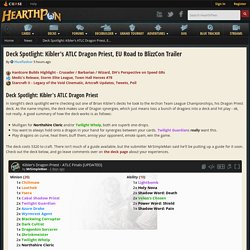 [TGT] Dreadlock - Dreadsteed combo deck - Hearthstone Decks. So the goal of this deck is to reach that endgame dream, having a full board of Dreadsteed to gain permanent boardcontroll and eventually outplay your opponent with endless heals and boardcontroll/damage spells. 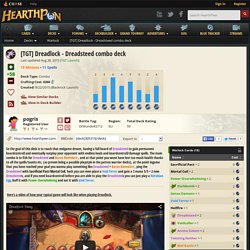 The main combo is to fish for Dreadsteed and Baron Rivendare , and at that point you wont have lost too much health thanks to all the spells/taunts etc. (as proven being a possible playstyle in the patron warrior decks), at the point ingame that you have reached your goal you wanna play something like Dreadsteed + Baron Rivendare , ping the Dreadsteed with Sacrificial Pact/Mortal Coil, heck you can even place a Void Terror and gain a 3 mana 5/5 + 2 new Dreadsteeds, and if you need boardcontroll before you are able to play the Dreadsteeds you can just play a Nerubian Egg, buff it with Power Overwhelming and eat it with Void Terror. Here's a video of how your typical game will look like when playing Dreadlock. Potentinal weaknesses Mulligan. [TGT] Sharper Shaman ( Minions? WHY?? ) - Deck. 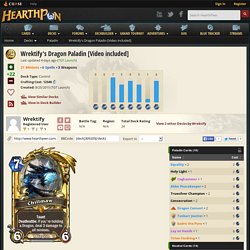 Wrektify here and I've brought a brand spankin' new Dragon Control Paladin for you all! Be sure to upvote to help share this awesome deck if you enjoy it! Now, it's only been less than 1 day since the release of TGT expansion so far but, this deck has done VERY well so far in the legendary bracket. It will more than likely need some slight fine tuning as the days go on but as of now, this is the deck I'm using in the NA legendary bracket and am winning with a strong rate (not yet tracked as of yet though). The basis of this deck is to control the pace of the game early with Wild Pyromancers, Faerie Dragon, Ironbeak Owl, Blackwing Technician, and Aldor Peacekeeper to make the most of your buffed dragon synergy minions early whcih leads into your big drops, which can be sped up with Dragon Consort. 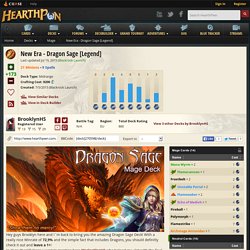 With a really nice Winrate of 72,9% and the simple fact that includes Dragons, you should definitly check it out and leave a 1+! In deep thankfulness i want to mention here MarineKingHS who helped me alot with the final developing and testing in Legend Ranks! Visit me on twitch.tv/brookandlyn. HTC Recharged 2015: Trump's winning decklists - Hearthstone ~ MetaBomb. Firestorm 4 - Addicted to Mage [Legend] Hey Bois and Girls, we are back again! 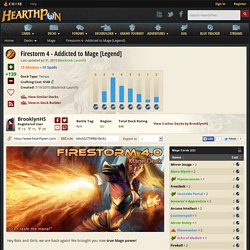 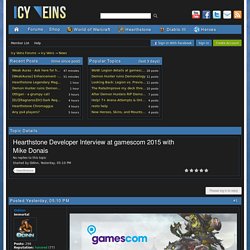 Some big surprises in this particular interview! We got some phenomenal information from Mike: Many of the cards that have been shown so far seem to slow the game down. Was this a deliberate design decision, or simply a byproduct of the nature of the Inspire and Joust mechanics? We wanted to give people answers to things they were uncomfortable with or complaining about. For the Joust mechanic, will there be a better animation eventually? There is an animation for the Joust mechanic, but it's not "jousting". Joust animation. HearthStone Top Deck - Heroes of Warcraft Deck list Database. Smile.amazon. Mage - Magician's Force - Deck. 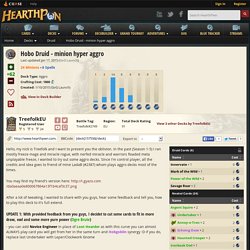 In the past (Season 1-5) I ran mostly freeze mage and miracle rogue, with nerfed miracle and warriors floaded meta unplayable freeze, I wanted to try out some aggro decks. Since I'm control player, all the credits and idea goes to friend of mine LadaB (#2387) whom plays aggro decks most of the times. Comprehensive Guide to Zoolock. [Hearthstone] Why You Never Give Up A Game. Obtaining the Galaxy Gifts Card Back & 3 Free Packs, Deck Spotlight: Budget Friendly Decks, Card Design Competition #25 - News. Supporting Solo Players, Diablo 3 Pet and Transmog With Legacy of the Void Digital Deluxe and CE, Termination Issues Solved Even Pirates can be Champions, Galaxy Gifts Card Back Now Available Method - Mythic Archimonde World First Obtaining the Galaxy Gifts Card Back & 3 Free Packs Last night the Galaxy Gifts card back promotion went live and is only available to those with a Samsung Galaxy S6. 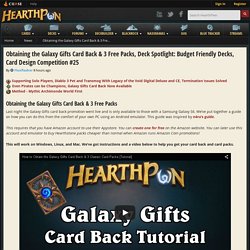 We’ve put together a guide on how you can do this from the comfort of your own PC using an Android emulator. This requires that you have Amazon account to use their Appstore. This will work on Windows, Linux, and Mac. Download Genymotion, an Android Emulator. FREE Galaxy Gifts Cardback and 3 Packs! It’s been a few hours since Blizzard officially launched the Galaxy Gifts card back, and people are already itching to get it.

The first way is, of course, to go out and get yourself a Galaxy S6. Lorewalker Cho Warlock deck - Forums. [Havoc] 1st Time Legend Apprentice Mech Mage. Hope you like this deck. But, if you're looking for another option on your grind to legend, check out my latest favorite Like it says in the title. This is my first time to legend. The highest I have been in the 3 seasons I've played is rank 2. So, I thought I might share the deck I used to get legend for those others out there trying to get there for the first time. Tempo Mage Deck w/ Archmage Antonidas. jPf4VZO.jpg (JPEG Image, 1514 × 947 pixels) - Scaled (67%)

Mage Decks. Warlock - Deckbuilder. Blizzard Thinks You're Better at Hearthstone Than You Think. Share. Just 0.5% of players have achieved Legend rank. By Vikki BlakeHearthstone developer Blizzard has clarified how players can better assess their decks and performance. Blizzard - which recently confirmed that there were now over 20 million registered Hearthstone players - noted that some players had commented that they were "not performing well". The Ranked Play mode, detailed on battle.net, not only provides an opportunity to test your deck-building skills against real opponents, but also offers the chance to snag new card backs if you achieve Rank 20 or higher in any season. "Recently, we’ve seen some comments from our players that feel they are not performing well in Ranked Play compared to others, or disappointed by the fact that they haven’t hit Legend rank," wrote community manager Zeriyah.

It is quite a complex deck to play, but offers great rewards to players who invest the time to master it 1. About the Author↑top This deck is presented to you by Sottle, a professional Hearthstone player from the UK who competes for H2k. Sottle regularly streams on Twitch and explains all of his moves. 2. Our deck costs 4,640 and it is made up of the following cards. 2.1. 3. Malygos Warlock is a new combo deck that is based around the shell of the popular Handlock archetype.

Your early-game turns will be quite passive, very similar to Handlock. During the mid-game, your strong mid-range removal cards will come into effect. Once it becomes time to make a push for victory, a key decision is when to play Emperor Thaurissan. 3.1. 3.2. 3.3. 4. Hearthstone Help: The 46 best cards revealed. Power Word: Shield Mana: 1 Crafting cost: N/A Class: Priest Rarity: Basic Give a minion +2 Health.

VS: So, I love cantrips . Health, in general, is better than attack, because a durable card will enable you to attack several times for greater combined damage than a single high-damage attack. SI:7 Agent. Hearthstone Features: Hearthstone crafting guide for beginners: The best neutral rares and epics. The second part of our crafting guide for beginners examines the 14 best neutral rare and epic cards in the game. Sanic Tempo Rogue! Now with guide! Hi everyone! Bonus Deck: Kel’thuzad Rogue! On Friday we give you the Deck of the Week, but sometimes we just cannot wait that long to show you something cool. Hearthstone deck guide: Firebat's Mech Shaman - MetaBomb.

Icy Veins - World of Warcraft/Hearthstone News and Guides. HearthStats. ArenaValue - Hearthstone Card Value Calculator. 'Hearthstone' Blackrock Mountain Adventure Review - The Best Way to Experience this Fantastic CCG (Review) After five weeks of playing, thinking, and writing about Hearthstone's [Free] Blackrock Mountain Adventure (BRM), the fun is over and we are back to playing plain, old Hearthstone. No more Wings to explore, no more crazy bosses to tackle, and, more importantly, no new cards to get. What's done is done though, and now that BRM is over, we can look back and see how Blizzard did in its second attempt at an Adventure after the successful Curse of Naxxramas.

If we look at the Adventure as a whole, I believe that Blizzard did a great job thematically, perhaps better than with Naxxramas, as the Dragon-and-Fire themes were represented very well in BRM's various wings. The card rewards were also great, and although they might not revolutionize the meta, I think they'll help turn the RNG down a notch. BRM wasn't perfect, though, and some of the issues that Naxxramas had also surfaced here, especially in terms of the Heroic Bosses and the lack of extra deck slots. Hearthstone Beginners Arena Guide. Ostkaka's Season 13 Control Warrior - Hearthstone Top Decks. Leeroy Jenkins - Card.

For that reason, in order to give a friendly welcome to the newcomers, we sat down to revisit our "best crafts" list.