3rd party tools - EVElopedia. Over the years, several tools and sites have been created by players to help develop their characters and manage information. 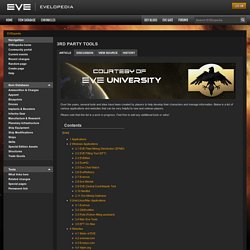 Below is a list of various applications and websites that can be very helpful to new and veteran players. Please note that this list is a work in progress. Feel free to add any additional tools or sites! Applications Applications listed below are the most important ones, that will be useful to majority of people. Windows Applications EVE Fleet Mining Distribution (EFMD) EFMD is a tool that allows fleet managers during mining operations to pay everyone their share. Email: IFoundTheLight@Optonline.com EVE Fitting Tool (EFT) EFT allows users to create, experiment, and save different ship fittings without the hassle of being in game. EVEMon EVEMon was created to help players with the daunting task of skill planning. EveHQ. Tentonhammer. 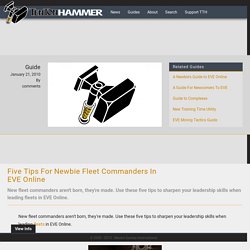 Use these five tips to sharpen your leadership skills when leading fleets in EVE Online. #1: Focus On Your Objective Decide what you want to accomplish, and ask your fellow corporation members if they are willing to help you achieve it. Be up front about being new to leading fleets, and that the risk of ship loss is high. EVE players are always looking for something to do. The least stressful objective you can try is gate-camping. The other basically easy kind of fleet is to take your friends through a stretch of space where potential targets might be, and try to find them at belts, in anomaly sites, or at gates. Don't rip the rug out from under your pilots if you want to change the purpose of your fleet. . #2: Know Your Territory Most PVP fleets for newer players will probably take place during empire wars, or in low-sec. High Security Space Low Security Space Null Security Space.

Five Tips For Succeeding As A New Player In EVE Online. EVE Online is not an easy game to master. 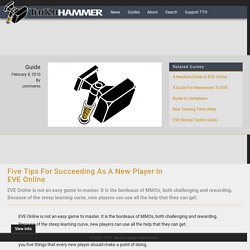 It is the bordeaux of MMOs, both challenging and rewarding. Because of the steep learning curve, new players can use all the help that they can get. This is the first in a multi-part series dedicated to helping new players get into EVE right off the bat. I present to you five things that every new player should make a point of doing. #5: Do The Damn Tutorial. Ten Tips For Joining The Right Corporation. Joining a corporation is the single most important thing that you can do to improve your EVE Online experience. 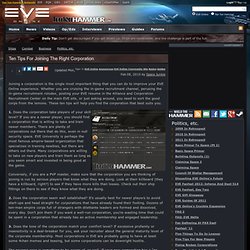 Does the corporation take players of your skill level? If you are a newer player, you should find a corporation that is willing to take and train newer members. Conversely, if you are a PVP master, make sure that the corporation you are thinking of joining is run by serious players that know what they are doing. Tentonhammer. The First Month Of Playing EVE Online. Everybody talks about how steep the learning curve is in EVE Online. 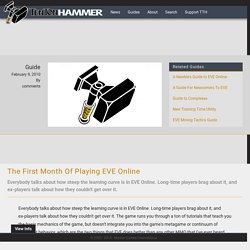 Long-time players brag about it, and ex-players talk about how they couldn't get over it. The game runs you through a ton of tutorials that teach you the basic mechanics of the game, but doesn't integrate you into the game's metagame or continuum of emergent behavior, which are the two things that EVE does better than any other MMO that I've ever heard about. This is the second in a multi-part series dedicated to helping new players get into EVE right off the bat. I present to you a step by step guide to what every new player should do in their first month of the game.

Week One: First Thing's First Your first week of the game should be spent familiarizing yourself with how the game works by doing the tutorial, and training the most basic skills, including some learning skills, fitting skills, and weapon/module skills. Week Two: Figure Out What You Like Week Three: Pick A Career (For Now) Other Career Options. EVEMon - BattleClinic - MMO guides - tools - advice - forums. Top Ten Newbie Mistakes In EVE Online. There are some pretty simple mistakes that are alarmingly common to new players in EVE Online. 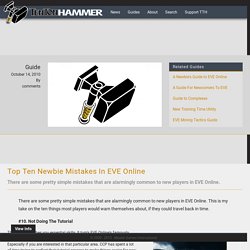 This is my take on the ten things most players would warn themselves about, if they could travel back in time. #10. Not Doing The Tutorial The tutorial teaches you essential skills. It turn's EVE Online's famously vertical learning curve into digestible bites. . #9. The internet has a wealth of freely available information about EVE Online. . #8. When I first started playing, I spent an awful lot of time mining with a Tormentor, which is a teensy frigate that nobody in their right mind would waste their time using for more than a day or two.

Maybe all that suffering built character, but I would rather have spent that time clowning around and actually doing things, rather than trying to maximize my ISK earning. A Beginner's Guide to EVE Online - EVElopedia. Aura is your ship's AI technology and will help you in many ways. 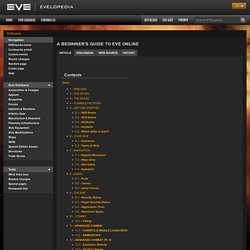 Welcome aboard pilot. I am Aura, your onboard personal AI computer. I have been tasked with assisting you throughout your journey into a new universe. Here you will learn how to conquer your first few steps into this fantastic universe and beyond. I will remain in contact with you throughout your stay in New Edan and will give hints, tips and tutorials when you need them. "When the stargates could take them no further, they turned against each other" Initialising Archive Memory...

More advanced than we are so today, the humans found themselves limited in their outer-space expansion efforts. The bravest of humans volunteered to venture in to the wormhole, in an attempt to find out what lay beyond the twisting vortex. Having successfully entered and re-emerged from the Wormhole unharmed, the brave pioneers announced the wonders laying beyond the wormhole's alluring grasp. Five mighty empires rose above the rest. EVE Online - Ore Chart.