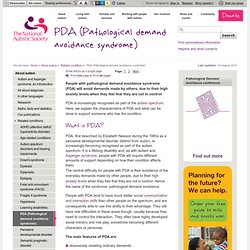 PDA is increasingly recognised as part of the autism spectrum. Here, we explain the characteristics of PDA and what can be done to support someone who has the condition. What is PDA? PDA, first described by Elizabeth Newson during the 1980s as a pervasive developmental disorder distinct from autism, is increasingly becoming recognised as part of the autism spectrum. It is a lifelong disability and, as with autism and Asperger syndrome, people with PDA will require different amounts of support depending on how their condition affects them. 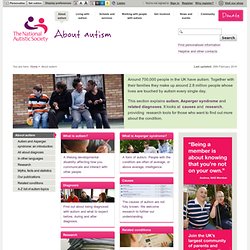 Together with their families they make up around 2.8 million people whose lives are touched by autism every single day. This section explains autism, Asperger syndrome and related diagnoses. It looks at causes and research, providing research tools for those who want to find out more about the condition. How often you should wash your. Here's a quick guide to how often you should wash pretty much everything in your home. 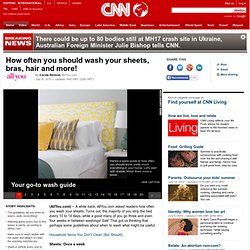 Let's start with sheets: Wash them once a week. Cars: Every one to three weeks Dogs: As needed Jeans: Every four to five wears Bras: Every 3 to 4 wears Your Face: Every night (and possibly in the morning, too) Your Hair: Every other day Window Screens: Once a year. Mattress: Every six months Oven: Every six months Pots and Pans: Three times a year (deep cleaning) Carpet: Once a year Purse: Every week. Free-Printable-Clean-House-Worksheet_BW_FabNFree. Parenting Special Needs Magazine. Becoming a Wholehearted Wife I - Focus on the Family Daily. Purchase – KaZAM Balance Bikes. Color Wheel Pro: Color Meaning. Red Red is the color of fire and blood, so it is associated with energy, war, danger, strength, power, determination as well as passion, desire, and love. 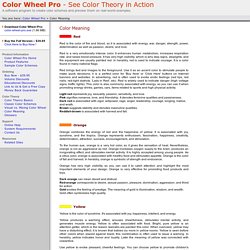 Red is a very emotionally intense color. It enhances human metabolism, increases respiration rate, and raises blood pressure. It has very high visibility, which is why stop signs, stoplights, and fire equipment are usually painted red. In heraldry, red is used to indicate courage. Red brings text and images to the foreground. Light red represents joy, sexuality, passion, sensitivity, and love. Orange Orange combines the energy of red and the happiness of yellow. To the human eye, orange is a very hot color, so it gives the sensation of heat.

Orange has very high visibility, so you can use it to catch attention and highlight the most important elements of your design. Dark orange can mean deceit and distrust. Yellow Yellow is the color of sunshine. Use yellow to evoke pleasant, cheerful feelings. Green Green is the color of nature. Blue. Food for Poems. Did you know that pumpernickel bread gets its dark color from cocoa powder? 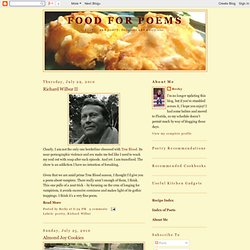 I didn’t – I presumed it had to do with the flour or the caraway seeds. Since regular rye isn’t dark, it should hardly have shocked me that cocoa was behind the pumpernickel hue we know and cherish. Since we’ve cleared up that mystery, let’s talk pumpernickel. Despite the inclusion of cocoa powder, it tastes nothing like chocolate. Maybe you love it; maybe you hate it. If you like pumpernickel, then you’ll be sure to like this homemade version even more. What are the LLLI guidelines for storing my pumped milk? “Hi I’m David, And I have Autism.” Posted 11 months ago By The Autism Site David has autism and he’s not ashamed of it. 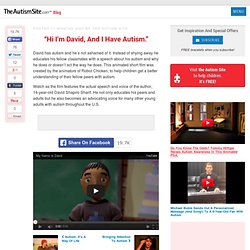 Instead of shying away he educates his fellow classmates with a speech about his autism and why he does or doesn’t act the way he does. This animated short film was created by the animators of Robot Chicken, to help children get a better understanding of their fellow peers with autism. Watch as the film features the actual speech and voice of the author, 14-year-old David Shapiro Sharif. He not only educates his peers and adults but he also becomes an advocating voice for many other young adults with autism throughout the U.S. More about: Stories of Hope, Videos, Ways to Help The Autism Site is a place where people can come together to support people who are affected by autism spectrum disorder. AUT – AdX – Blog – Footboard – 728×90.