Teaching Online - A Time Comparison. Ers03036.pdf. The Changing Face of Higher Education: The Future of the Traditional University Experience. Sarah Cummings sat at the kitchen table, her Web browser open and a handful of graduate school brochures strewn about. 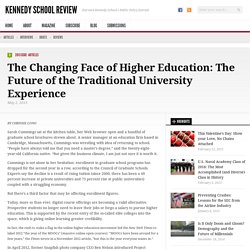 A senior manager at an education firm based in Cambridge, Massachusetts, Cummings was wrestling with idea of returning to school. “People have always told me that you need a master’s degree,” said the twenty-eight-year-old California native. “But given the business climate, I am just not sure it is worth it. Cummings is not alone in her hesitation: enrollment in graduate school programs has dropped for the second year in a row, according to the Council of Graduate Schools.

Experts say the decline is a result of rising tuition (since 2000, there has been a 49 percent increase at private universities and 73 percent rise at public universities) coupled with a struggling economy. But there’s a third factor that may be affecting enrollment figures. Today, more so than ever, digital course offerings are becoming a valid alternative.

Will Professors Teach Differently in 10 Years? Unfortunately, my guess is that the answer to this question is a sound “NO”. 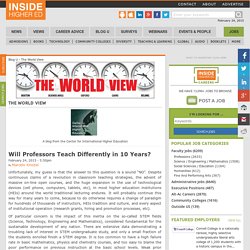 Despite continuous claims of a revolution in classroom teaching strategies, the advent of massive on-line open courses, and the huge expansion in the use of technological devices (cell phone, computers, tablets, etc), in most higher education institutions (HEIs) around the world traditional lecturing endures. It will probably continue this way for many years to come, because to do otherwise requires a change of paradigm for hundreds of thousands of instructors, HEIs tradition and culture, and every aspect of institutional operation (research grants, hiring and promotion processes, etc). Of particular concern is the impact of this inertia on the so-called STEM fields (Science, Technology, Engineering and Mathematics), considered fundamental for the sustainable development of any nation.

Inevitably, this will change slowly, if it happens at all. This is a critical challenge for the next decade. Two-year colleges in Washington State expand competency-based project with business degree. The online, competency-based certificate Bellevue College offered last year was a hit with students. 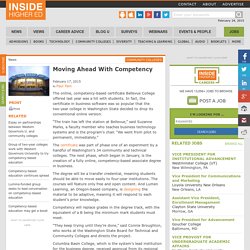 In fact, the certificate in business software was so popular that the two-year college in Washington State decided to drop its conventional online version. “The train has left the station at Bellevue,” said Suzanne Marks, a faculty member who teaches business technology systems and is the program's chair. “We went from pilot to permanent, immediately.” The certificate was part of phase one of an experiment by a handful of Washington’s 34 community and technical colleges. The Future of MOOCs. MOOCs are not dead, but MOOC mania has certainly abated. 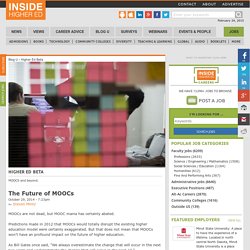 Predictions made in 2012 that MOOCs would totally disrupt the existing higher education model were certainly exaggerated. But that does not mean that MOOCs won’t have an profound impact on the future of higher education. Anant Agarwal: Why massive open online courses (still) matter. How Free Online Courses Are Changing Traditional Education. Promises-of-Online-Higher-Ed-Access2.pdf. The Real Trouble With Online Higher Ed

The past few weeks have seen twists and turns in the ongoing debate about the quality and worth of online learning, and its role in the future of higher ed. 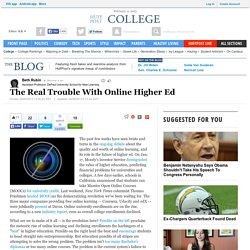 What are we to make of it all -- is the revolution here? Changingcourse.pdf. Americans' Trust in Online Higher Ed Rising. This article is part of a weeklong series analyzing how education leaders, students, and teachers evaluate education in America. 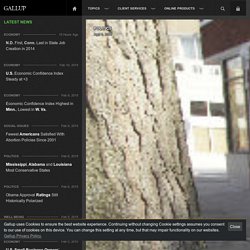 The series will feature Americans' opinions on topics such as the Common Core, a uniform set of academic skills and competencies in U.S. schools; the quality of public K-12 education; the level of respect for U.S. teachers; and the viability of online higher education. WASHINGTON, D.C. -- Americans' trust in the quality of online colleges and universities is steadily rising. More U.S. adults, 37%, now agree or strongly agree that these institutions offer high-quality education than did so in 2011 (30%) when Gallup first asked this question.

Roughly one in four (27%) disagree or strongly disagree. These findings are from a Nov. 25-Dec. 15, 2013, study by Gallup and Lumina Foundation with a random sample of more than 1,000 U.S. adults. Business Leaders Have Varying Perspectives on Hiring Online Graduates Implications Survey Methods. The “Promises” of Online Higher Education: Access - Campaign for the Future of Higher Education. The “promise” that online learning will dramatically expand access to higher education is at the center of the recent push in the MOOC/Online movement. 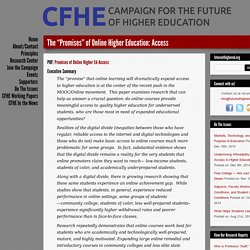 This paper examines research that can help us answer a crucial question: do online courses provide meaningful access to quality higher education for underserved students, who are those most in need of expanded educational opportunities? Realities of the digital divide (inequities between those who have regular, reliable access to the internet and digital technologies and those who do not) make basic access to online courses much more problematic for some groups.

In fact, substantial evidence shows that the digital divide remains a reality for the very students that online promoters claim they want to reach— low-income students, students of color, and academically underprepared students. Along with a digital divide, there is growing research showing that these same students experience an online achievement gap. Online Education May Transform Higher Ed. Can online education be the rock that disturbs the placid waters of American higher education? 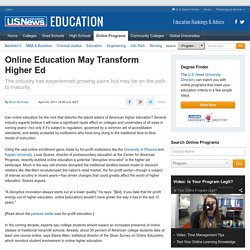 Several industry experts believe it will have a significant ripple effect on colleges and universities of all sizes in coming years—but only if it's subject to regulation, governed by a common set of accreditation standards, and widely accepted by institutions who have long clung to the traditional face-to-face model of instruction.