Troy Wiseman is the Co-Founder and CEO of EcoPlanet Bamboo, a company built on a dual dedication to restore degraded land and provide the marketplace with an alternative fiber combined with commercial-scale business solutions. 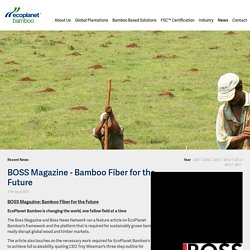 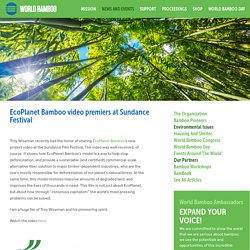 The video was well-received, of course. It shows how EcoPlanet Bamboo’s model is a way to help stop deforestation, and provide a sustainable (and certified!) Commercial-scale alternative fiber solution to major timber-dependent industries, who are the one's mostly responsible for deforestation of our planet's natural forest. EcoPlanet Bamboo Founder Troy Wiseman Nature Lover. How does a boy from the US deep south end up being a pioneer in the global sustainable forestry industry? 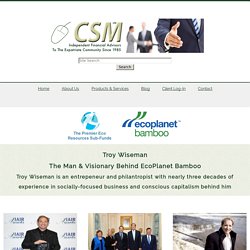 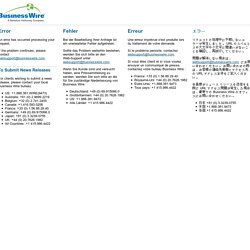 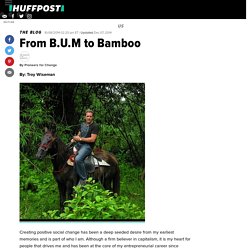 Although a firm believer in capitalism, it is my heart for people that drives me and has been at the core of my entrepreneurial career since leaving home at 17, with nothing but $300 and a dream. That dream was to build a company where people wanted to work hard, felt they mattered and were encouraged to reach for the stars. I knew undoubtedly that to have the influence needed to make a real difference in the world you have to have money. Three years later, with money saved from working two jobs, and a new credit card with 21% interest, I started my first company. A Solar Powered Party In London. LONDON--(BUSINESS WIRE)--Acclaimed designer, campaigner and environmentalist Dame Vivienne Westwood and Troy Wiseman, CEO of EcoPlanet Bamboo co-host ‘OFFtheGRID’ - a solar powered party in London for crowd-sourcing platform Trillion Fund in partnership with Finding Infinity. 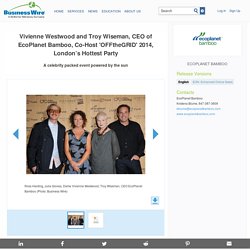 The inaugural event took place to support the “renewable energy revolution” and to provide a clarion call to the general public and mainstream investors to switch to investments that positively impact the environment. “investment into innovative technology development to meet a new generation of consumer, and the provision of sustainable sources of fibre to an ever increasing global population is taking off.”Tweet this The event was taken off the grid and powered exclusively by solar panels, mounted on and designed with structural bamboo. The ‘OFFtheGRID’ Party is “the result of a combined vision to solve some of the very problems that EcoPlanet Bamboo was created to overcome in a profitable way. EcoPlanet Bamboo: Thinking Long-Term - Ecosystem Marketplace. About this Series This interview is part of an ongoing series of discussions with market participants culled from our research into this year’s “State of the Voluntary Carbon Markets” report, which will be launched on May 28 at Carbon Expo in Cologne, Germany. 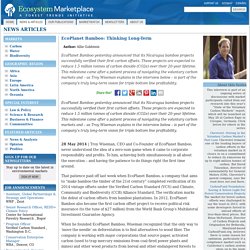 Click below for others in the series Chevrolet: Driving in the Voluntary Carbon Market’s Fast Lane Chevrolet remains one of the leading buyers of carbon offsets in the voluntary market as it closes in on a commitment to reduce its emissions by up to eight million tonnes of carbon. But David Tulauskas, director of sustainability for General Motors (GM), Chevrolet’s parent company, says the road does not end there. CarbonFund Foundation: Seeing A Yellow Light For Forest Conservation Projects The market for forest carbon offsets was challenged to say the least in 2013, with some developers forced to unload offsets at less-than-ideal prices. Environmental Credit Corp: California, here we come! Read more on the Forest Carbon Portal.

EcoPlanet Bamboo's Solution to Microbeads. IN Creative ON 28 Feb, 2017 Over the past decade the increase in consumption of microbeads by the cosmetic industry has grown exponentially. 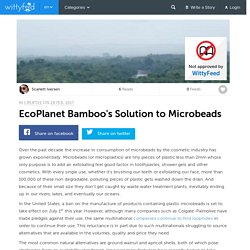 Microbeads (or microplastics) are tiny pieces of plastic less than 2mm whose only purpose is to add an exfoliating feel good factor in toothpastes, shower gels and other cosmetics. With every single use, whether it's brushing our teeth or exfoliating our face, more than 100,000 of these non degradable, polluting pieces of plastic gets washed down the drain. And because of their small size they don't get caught by waste water treatment plants, inevitably ending up in our rivers, lakes, and eventually our oceans. In the United States, a ban on the manufacture of products containing plastic microbeads is set to take effect on July 1st this year.

EcoPlanet Bamboo's Solution to Microbeads. EcoPlanet Bamboo & Bathurst - At the Centre of the Universe. The local butcher Tiaan is feeding most of the town tonight with a steak braai. 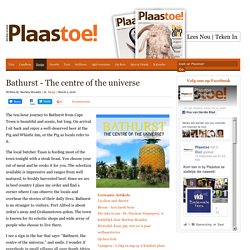 You choose your cut of meat and he cooks it for you. The selection available is impressive and ranges from well matured, to freshly harvested beef. Since we are in beef country I place my order and find a corner where I can observe the locals and overhear the stories of their daily lives. Bathurst is no stranger to visitors. Troy Wiseman's Heart for People. Troy Wiseman’s heart for people has been a critical factor in his outstanding success as an entrepreneur, businessman, investor and leader. 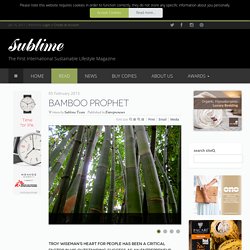 Changing lives in communities devoid of hope has become more than just a passion. Troy Wiseman - Global Landscapes Forum Paris 5-6 Dec. An Interview With Troy Wiseman, CEO of Ecoplanet Bamboo. Troy Wiseman Joins Earth Day Network Board of Directors. The first Earth Day, on April 22, 1970, activated 20 million Americans from all walks of life and is widely credited with launching the modern environmental movement.

The movement works through a combination of education, public policy, and consumer campaigns. Earth Day Network Board of Directors. GERALD TORRES, Board Chair, Jane M.G. Foster Professor, Cornell Law School Currently the president of the Association of American Law Schools (AALS), Professor Torres is a leading figure in critical race theory and an expert in agricultural and environmental law. He taught and served as associate dean at The University of Minnesota Law School, as deputy assistant attorney general for the Environment and Natural Resources Division of the U.S. Department of Justice and as counsel to then U.S. Attorney General Janet Reno. Prof. DENIS HAYES, Board Chair Emeritus, President, CEO, The Bullitt Foundation Denis Hayes is president and CEO of Bullitt Foundation, which built the “world’s greenest office building” [www.Bullittcenter.org].