Queer Theory. Judith Butler: Your Behavior Creates Your Gender. The Intelligent Homosexual’s Guide to Natural Selection and Evolution, with a Key to Many Complicating Factors. June is Pride Month in the United States, and in communities across the country, lesbian, gay, bisexual, and transgendered Americans are celebrating with carnivals, parades, and marches. 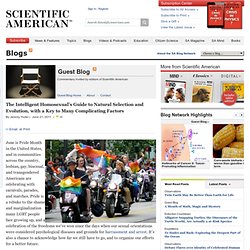 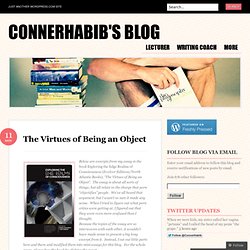 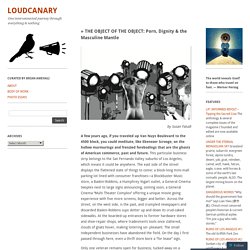 This particular business strip belongs to the San Fernando Valley suburbs of Los Angeles, which means it could be anywhere. The east side of the street displays the flattened state of things to come: a block-long mini-mall parking lot lined with consumer franchises—a Blockbuster Music store, a Baskin-Robbins, a Humphrey Yogart outlet, a General Cinema twoplex next to large signs announcing, coming soon, a General Cinema ‘‘Multi Theater Complex’’ offering a unique movie going experience with five more screens, bigger and better. 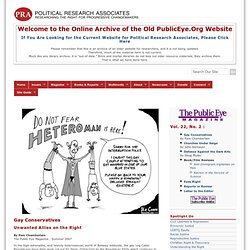 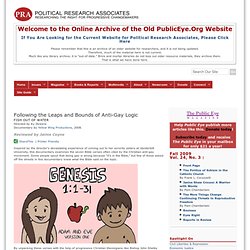 A Queer Atheist In the Heart of Mormon Country. Last weekend a group of around 400 Mormons marched in the Utah Pride Parade. 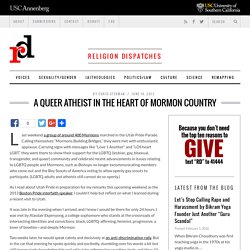 Calling themselves “Mormons Building Bridges,” they were met with enthusiastic applause. Carrying signs with messages like “Love 1 Another” and “LDS heart LGBT,” they were there to show their support for the LGBTQ (lesbian, gay, bisexual, transgender, and queer) community and celebrate recent advancements in issues relating to LGBTQ people and Mormons, such as Bishops no longer excommunicating members who come out and the Boy Scouts of America voting to allow openly gay scouts to participate. (LGBTQ adults and atheists still cannot do so openly.) How the Right Passed Prop 8. Tying the Not How the Right Succeeded in Passing Proposition 8 By Surina Khan Surina Khan is Vice President of Programs for the Women’s Foundation of California. 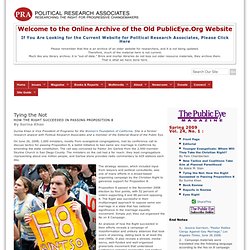 She is a former research analyst with Political Research Associates and a member of the Editorial Board of the Public Eye. On June 26, 2008, 1,000 ministers, mostly from evangelical congregations, met by conference call to discuss tactics for passing Proposition 8, a ballot initiative to ban same sex marriage in California by amending the state constitution. The call was convened by Pastor Jim Garlow from the 2,500-member Skyline Church in San Diego County. The ministers on the call had a far reach: they lead congregations representing about one million people, and Garlow alone provides radio commentary to 629 stations each day.

Proposition 8 passed in the November 2008 election by four points, with 52 percent of voters supporting it and 48 percent opposing it. Cranky Old Politician Promises to Commit Hate Crimes Against Transsexuals. President of Group That Used to ‘Pray Away the Gay’ Apologizes to LGBTQ Community. Culture Wars, Eveangelicals, and Political Power. Culture Wars, Evangelicals, and Political Power Lessons from the 2008 Presidential Election By Chip Berlet and Frederick Clarkson Chip Berlet is Senior Analyst of the progressive think tank Political Research Associates. 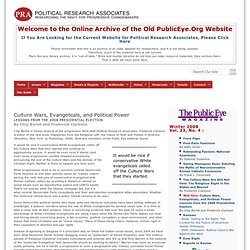 Frederick Clarkson is editor of the new book, Dispatches from the Religious Left: the Future of Faith and Politics in America (Brooklyn, New York: Ig Publishing, 2008). Both are members of the Public Eye editorial board. It would be nice if conservative White evangelicals called off the Culture Wars that they started. Heritage is Hip to Culture -Think Tank Turns to Family Values. (andreal/iStockphoto) Think Tank Turns to Family Values By Pam Chamberlain. 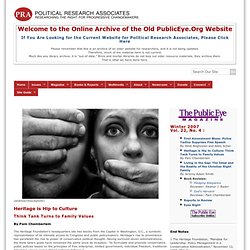 Articles: We Invented Swag: NYC's Queer Rap. Photo by Michael Renaud . Click play on the top right corner of the page to listen to artists mentioned in this piece. That Feminist Dyke - An Explanation of Queer-Baiting and Why it’s a Problem - An Explanation of Queer-Baiting and Why it's a Problem. Bisexual politics. “Bisexual Politics” refer to arguments that surround individuals that identify as bisexual and their perspectives on issues involving sexuality, equality, visibility and inclusion. 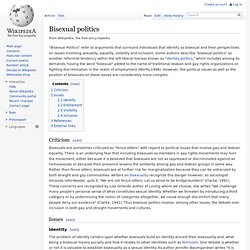 Some authors describe "bisexual politics" as another reformist tendency within the left-liberal morass known as "identity politics," which includes among its demands, having the word "bisexual" added to the name of traditional lesbian and gay rights organizations or fighting discrimination in the realm of employment (Morfis,1996). However, the political issues as well as the position of bisexuals on these issues are considerably more complex. Criticism[edit] Bisexuals are sometimes criticized as “fence sitters” with regard to political issues that involve gay and lesbian equality.

Issues[edit] Identity[edit] Cisgender. Cisgender and cissexual (often abbreviated to simply cis) describe related types of gender identity where an individual's experience of their own gender matches the sex they were assigned at birth.[1] Sociologists Kristen Schilt and Laurel Westbrook define cisgender as a label for "individuals who have a match between the gender they were assigned at birth, their bodies, and their personal identity" as a complement to transgender.[2] Prominent gay activist John Aravosis considers the term "a slur against non-trans people. "[3] There are a number of derivatives of the terms in use, including cis male for "male assigned male at birth", cis female for "female assigned female at birth", analogically cis man and cis woman, as well as cissexism and cissexual assumption.

In addition, certain scholars have begun to use the term cisnormativity, akin to the queer studies' heteronormativity.[4][5] A related adjective is gender-normative; Eli R. Cisgender vs. cissexual[edit] Trans 101: Cisgender : Basic Rights Oregon. Unpacking Hetero-Patriarchy: Tracing the Conflation of Sex, Gender & (and) Sexual Orientation to Its Origins Symposium. 30+ Examples of Cisgender Privileges. Following is a list of cisgender identity privileges.

If you are cisgender, listed below are benefits that result from your alignment of identity and perceived identity. If you’re not familiar with the term, “cisgender” means having a biological sex that matches your gender identity and expression, resulting in other people accurately perceiving your gender. Richard O'Brien: ‘I'm 70% man' Rocky Horror Show writer Richard O'Brien thinks of himself as 70% male and 30% female. What exactly does that mean? Richard O'Brien, writer of hit musical The Rocky Horror Show, delighted in shaking up the conservative sexual attitudes of the 1970s. His most famous creation, Dr Frank N Furter, brought the house down with his song Sweet Transvestite. Sweatshop Produced Rainbow Flags and Participatory Patriarchy. Why Feminism Needs To Be Trans-Inclusive, or The Bodily Consequences of Cisnormativity. You can't smash patriarchy with transphobia - Features. It is time to end the tolerance of transphobia in radical feminist circles, argues Ray Filar.

Slut. There's been a Slutwalk in my home town. The Rad Fem Vs. The Trans Activist. Transsexuals, Transgender, and Radical Feminism: Part 4: Racist Patriarchy, Post-Modernism, Genderism, and Bigotry. The “Gender Atheist” vs. The Transgender Atheist » Sincerely, Natalie Reed. Radfem 101: A radical feminist primer (Part Four) Radical feminism, by definition, seeks to dis-cover and examine the root of women’s global oppression by men, and the sources of male power.

In our work, we have discovered that there are several key themes that appear over and over, and which transcend time and place — this is evidence that women’s oppression by men is class-based, that is, that women as a sexual class, around the world, share the experience of being oppressed by men because we are women. Deep Green Resistance: Unearthing Racist Radical Feminism & Transphobia From Within. Radical feminism came out of the idea that feminists couldn’t overstate the oppression of women. Responding To The Feminist Anti-Transsexual Arguments. Radfem and the Anti-Transgender Agenda. The Transsexual Empire. Transgender Activism: A Lesbian Feminist Perspective - Transgender Activism A Lesbian Feminist Perspective by Sheila Jeffreys, Journal of Lesbian Studies 1997[1].pdf. Trans criticism is not transphobia. Statement from John Mulholland, editor of the Observer. I Am Whoever You Say I Am at Questioning Transphobia. The F-Word bloggers' position on transphobia and cissexism.

Julie Bindel: It's not me. It's you. Transsexuals Should Cut It Out. Julie Bindel: Where's the Politics in Sex? Julie Bindel meets Sheila Jeffreys, author of The Industrial Vagina. The patriarchy is dead ... but the kyriarchy lives on. Why GenderPAC Failed — PrettyQueer.com. Cisnormativity. How gatekeepers made me hate my body: a narrative (part 1)

Violence Against the Transgendered Only Getting Worse. Transsexuals targeted in over a dozen attacks in Malaysia.