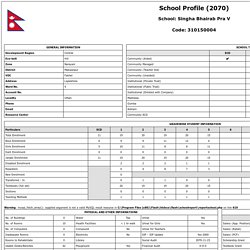 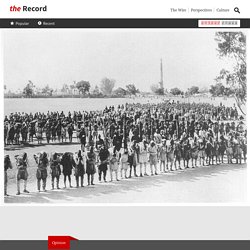 I first traveled to Rasuwa district some ten years ago. Just a day’s drive north of Kathmandu, it seemed a different world altogether. High, rocky mountains and pine forests instead of gentle foothills and valleys; mani walls, chortens, and Buddhist prayer flags instead of Hindu shrines and temples; elderly people who spoke Tamang and greeted me with “tashi delek” instead of “namaste”; Tamang women dressed in angdung and syade and men who spoke Nepali with an accent that would invite ridicule in Kathmandu. ECSNEPAL - The Nepali Way. Prabesh Roka and Dr. 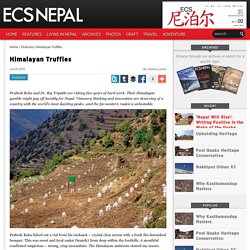 Raj Tripathi are risking five years of hard work. Their Himalayan gamble might pay off lavishly for Nepal. Visionary thinking and innovation are deserving of a country with the world’s most dazzling peaks…and the far-western raaksi is unbeatable. Prabesh Roka fished out a vial from his rucksack -- crystal clear nectar with a fresh fire-burnished bouquet. This was sweet and feral raaksi (brandy) from deep within the foothills. Straightaway, I judged the man by his wholesome firewater -- anyone who offers pure raaksi in Kathmandu is trustworthy by my humble reckoning. Beyond farming, there is little alternative economy in Thabang.

Roka is pouring his energies into high-revenue crops. The raaksi was brewed from Thabang’s ground apple harvest. Center. Nepal earthquake: The remote communities still waiting for help - BBC News. Buddhimaya is still desperately waiting for help, a week after Nepal's earthquake reduced most of her home to rubble. 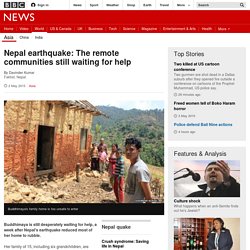 Her family of 15, including six grandchildren, are living in a tent with their neighbours. After being soaked in rain water for days, the tent is filled with the stench of the damp fabric and bedding. Buddhimaya's options are fast running out. The Tamang epicentre. A Tamang woman injured in the 25 April earthquake sits next to the ruins of her house in Chhapgaun, Sindhupalchok. 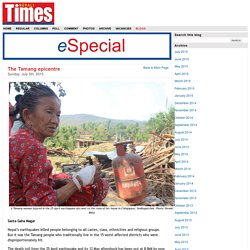 The country is yours. Porters transporting a car across a stream in Nepal (January, 1950). 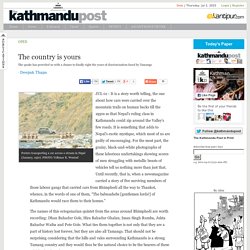 PHOTO: Volkmar K. Wentzel JUL 01 - It is a story worth telling, the one about how cars were carried over the mountain trails on human backs till the 1950s so that Nepal’s ruling class in Kathmandu could zip around the Valley’s few roads. It is something that adds to Nepal’s exotic mystique, which most of us are guilty of encouraging.

Nepal earthquake: The remote communities still waiting for help - BBC News. Survivors, not victims. JUN 05 - The recent 7.9 magnitude earthquake and its over 200 aftershocks, not only took the lives of about 9000 people and destroyed thousands of houses, including major world heritage sites, but also generated some fresh discourses on nationalism, politics, and nation-building. 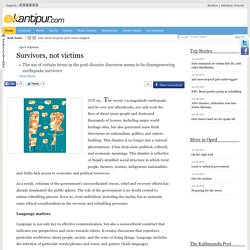 This disaster is no longer just a ‘natural’ phenomenon; it has deep socio-political, cultural, and economic meanings. This disaster is reflective of Nepal’s stratified social structure in which rural people, farmers, women, indigenous nationalities and Dalits lack access to economic and political resources. As a result, criticism of the government’s uncoordinated rescue, relief and recovery efforts has already dominated the public sphere. The role of the government is no doubt central to nation-rebuilding process. Nepal Earthquake Recovery Appeal 2015 (NERA)-Activities Update. The third distribution was to Dukthali, a Kami (Dalit) village, some 800ft down a steep track off a rough road leading north from Charikot in Dolakha District, 130 kms (6 hour drive) east of Kathmandu. 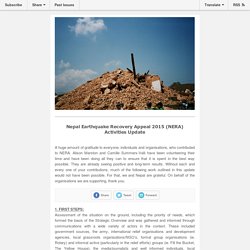 This relief distribution of two truck loads and 2 jeeps was for 150 families/households and like the other distributions all the arrangements prior to the trip had been organised to include lists of all those in the greatest need and families were given numbered coupons and ticked off lists to make sure there wasn’t duplication.

Families like before received a bucket, 25kgs rice, lentils, dry instant noodles, biscuits, soya beans and a large tarpaulin, blanket, mosquito net, solar light set (through which mobile phones can also be charged), an iron cooking pot, metal plates, salt and water purifying tablets. Robin Marston, who drove one of the accompanying jeeps was able to apply his ex-army/Gurkha and trekking logistical knowledge to the distribution.