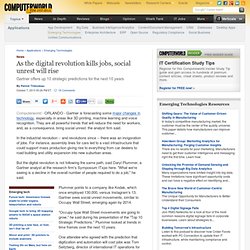 They are all powerful trends that will reduce the need for workers, and, as a consequence, bring social unrest, the analyst firm said. In the industrial revolution -- and revolutions since -- there was an invigoration of jobs. For instance, assembly lines for cars led to a vast infrastructure that could support mass production giving rise to everything from car dealers to road building and utility expansion into new suburban areas. Imagine a Future Where Africa Leapfrogs Developed Economies - Ed Bernstein , and Ted Farrington. By Ed Bernstein and Ted Farrington | 11:00 AM November 25, 2013 Dreaming about the future creates dissonance. 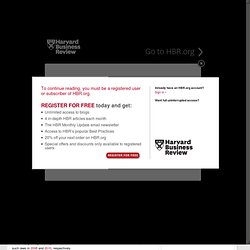 On one hand, we like to imagine a future utopia: the world is at peace, the moon is colonized, cats and dogs get along, and we all travel to work via hover cars or teleportation. On the other hand, we are disheartened by more realistic thoughts in which the world of the future is pretty much as it is now, just with cooler gadgets and a faster Internet. But what if there were changes taking place, visible changes today that we all see and comment on, which, together, carry enough momentum to utterly change the way we do business 25 years from now?

In 2012, the Industrial Research Institute (IRI) commissioned a foresight study into the future of R&D management called IRI2038. We've Entered The Volatile Postnormal Stage Of History. Mark Twain once wisecracked, "History doesn’t repeat itself, but it rhymes. 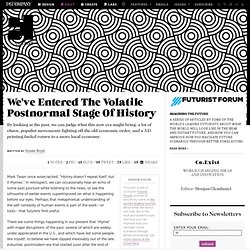 " In retrospect, we can occasionally hear an echo of some past juncture while listening to the news, or see the silhouette of earlier events superimposed on what is happening before our eyes. Perhaps that metaphorical understanding of the self-similarity of human events is part of the work--or tools--that futurists find useful. There are some things happening in our present that "rhyme" with major disruptions of the past, several of which are widely under appreciated in the U.S., and which have led some people, like myself, to believe we have slipped inexorably out of the late industrial, postmodern era that started soon after the end of World War II.

I refer to this period as the postnormal. The Future Doesn’t Hurt.... Yet. Ven. 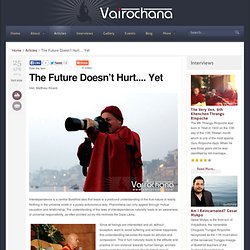 Matthieu Ricard Interdependence is a central Buddhist idea that leads to a profound understanding of the true nature of reality. Nothing in the universe exists in a purely autonomous way. Ecumenopolis. Living in the Futures. In 1965 Royal Dutch Shell put into service what it called the Unified Planning Machinery (UPM), a computer-driven system meant to bring more discipline to the company’s cash flow planning. 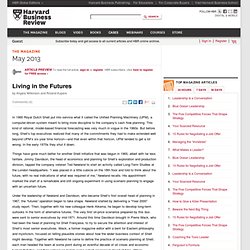 This kind of rational, model-based financial forecasting was very much in vogue in the 1960s. But before long, Shell’s top executives realized that many of the commitments they had to make extended well beyond UPM’s six-year time horizon—and that even within that horizon, UPM tended to get a lot wrong. Innovation Starts With Sensing Future Possibilities. In 2007, a team of MIT professors decided to bet on an impossibility. 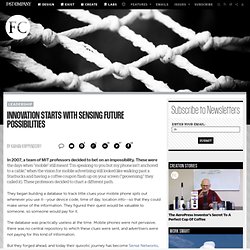 These were the days when “mobile” still meant “I’m speaking to you but my phone isn’t anchored to a cable,” when the vision for mobile advertising still looked like walking past a Starbucks and having a coffee coupon flash up on your screen (“geosensing,” they called it). These professors decided to chart a different path. They began building a database to track little clues your mobile phone spits out whenever you use it--your device code, time of day, location info--so that they could make sense of the information.

They figured their quest would be valuable to someone, so someone would pay for it. Looking beyond the horizon. What will happen to the UK economy if the eurozone collapses? 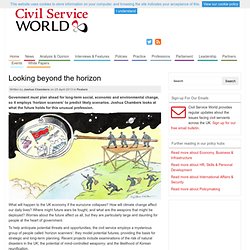 How will climate change affect our daily lives? Where might future wars be fought, and what are the weapons that might be deployed? Worries about the future affect us all, but they are particularly large and daunting for people at the heart of government. Top 10 quotes by Richard Branson. Leadership Article 10 actions for working as part of a younger team 14 April 2014 Today, there are many baby boomers in today's work force who face the issue of working with younger people. 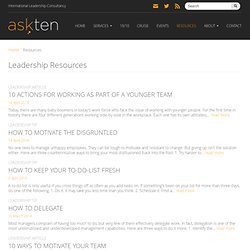 ReConstitutional Convention » Reimagine Governance. Thinking Futures — Agility and being futures ready. The Agility Factor, an article on the strategy+business website is a good one, and worth reading. 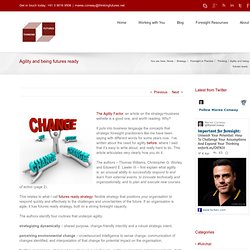 Why? It puts into business langauge the concepts that strategic foresight pracitioners like me have been saying with different words for some years now. I’ve written about the need for agility before, where I said that it’s easy to write about, and really hard to do. This article articulates very clearly how you do it. Remote Control Japanese Style Toilet. Foresight, Strategy Development and Change Design.

Through the Prism. Glenn Hough April 16, 2013 Future Studies and Science Fiction revolve around each other as if they are gravitationally attracted. 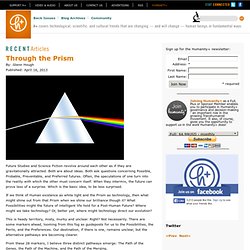 Both are about ideas. Both ask questions concerning Possible, Probable, Preventable, and Preferred futures. 3 Reasons Why Your Predictions Of The Future Will Go Wrong. NTRARY BRIN: Questions I am frequently asked about… (Part IV) Prediction and the Future. Continuing this compilation of questions that I’m frequently asked by interviewers. This time about… --Your writing touches on the impact of technology upon humanity, and its power to change our daily lives. From Ray Kurzweil to Kanye West, everyone’s a futurist now. In 1963, in the depths of the Cold War, all of the futurists in the world could probably assemble in a largish conference room and still have space for an overhead projector. Half a century later, it would take a small stadium to hold all of the people who use the title in some form. The world of futures is a broad church today populated by everyone from author and inventor Ray Kurzweil and his obsessive focus on the singularity to Kanye West with his future-esque fashion fetishes.

Gerd’s Guide to Disruption, Part 2: the cashless society, 3D printers and piracy, mobile devices as external brains …and more - Futurist Gerd Leonhard. So here is part 2 of my Guide to Disruption, continued from points 1-7 last week, here. Update: download the PDF with all 3 posts: Gerd’s Guide to Disruption 2013 Before I dive in, this is a key point to remember: because of global technology-fueled empowerment (hopefully not enslavement;) and the accelerating trend to a true ‘global village‘ (see my XMedia Basel slides on this, here) sudden and merciless disruption can now arise from any place with high speed Internet access (see waze versus Garmin and Navteq) as education and learning goes digital, talent arises from everywhere and venture capitalists finally go global (not sure that’s such a good thing, though) 8) The cashless society will increasingly – and in some BRIC & CIVET nations very rapidly, indeed – become a reality, mostly driven by the mobile technology innovation boom that delivers pretty amazing solutions for the un-banked in developing countries (such as MPesa).

That’s it for today – hope you enjoyed part 2. Never enough. There's never enough time to be as patient as we need to be. Not enough slack to focus on the long-term, too much urgency in the now to take the time and to plan ahead. That urgent sign post just ahead demands all of our intention (and attention), and we decide to invest in, "down the road," down the road.

It's not only more urgent, but it's easier to run to the urgent meeting than it is to sit down with a colleague and figure out the truth of what matters and the why of what's before us. And there's never enough money to easily make the investments that matter. Not enough surplus in the budget to take care of those that need our help, too much on our plate to be generous right now.

The Futures Agency. A Singularity in All Four Quadrants. The Remarkable Ways We Gain Insights. Looking Back on the Limits of Growth. The Origins of Futurism. Complexity map castellani map of complexity science. The Hidden Danger of Being Risk-Averse - Heidi Grant Halvorson.

By Heidi Grant Halvorson | 9:00 AM July 2, 2013. The Future Doesn’t Hurt.... Yet. Ven. Matthieu Ricard Interdependence is a central Buddhist idea that leads to a profound understanding of the true nature of reality. Nothing in the universe exists in a purely autonomous way. Phenomena can only appear through mutual causation and relationship.

The understanding of the laws of interdependence naturally leads to an awareness of universal responsibility, as often pointed out by His Holiness the Dalai Lama. The end of the world isn't as likely as humans fighting back. The Corporation is at Odds with the Future - Grant McCracken. By Grant McCracken | 1:00 PM May 29, 2013 A client recently asked me to comment crisply on the future. Living in the Futures. Innovation foresight. Mankind Has Already Passed The Singularity. The future is a foreign country; they do things differently there. Suspense & Surprise: Poetics of the Future. ~ reaching beyond the known to bring the future into the present ~ Joi Ito's Near-Perfect Explanation of the Next 100 Years.

Are you hunting the future? 5 Unexpected Factors That Change How We Forecast The Future.