How to think about 2076. Vincent Fournier/Gallerystock By Sumit Paul-Choudhury JOURNALISM has famously been described as “the first rough draft of history.” 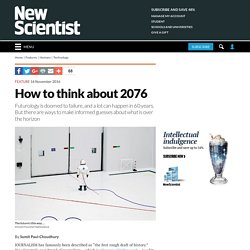 New Scientist‘s own brand of journalism – which is 60 years old this week – is a bit different. We aim to provide a first rough draft of the future. Over the past 60 years we have not just reported new discoveries and inventions in science and technology. Thesis, antithesis and synthesis: A constructive direction for politics and policy after Brexit and Trump. In the heady days of 1989, with communism collapsing and the Cold War seemingly over, the political theorist Francis Fukuyama declared that we were witnessing the "end of history" which had culminated in the triumph of liberal democracy and the free market. 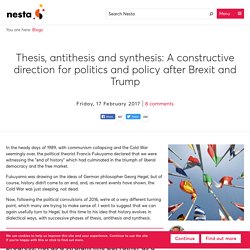 Fukuyama was drawing on the ideas of German philosopher Georg Hegel, but of course, history didn’t come to an end, and, as recent events have shown, the Cold War was just sleeping, not dead. Now, following the political convulsions of 2016, we’re at a very different turning point, which many are trying to make sense of. I want to suggest that we can again usefully turn to Hegel, but this time to his idea that history evolves in dialectical ways, with successive phases of thesis, antithesis and synthesis.

We Asked Sci-Fi Writers About The Future Of Climate Change. Track change to accelerate sustainable action. Bloomberg. Seven futures from New Scientist  I’ve got round to reading the New Scientist‘s 60th anniversary issue, published in November, which tries to look forward in the general direction of 2076. 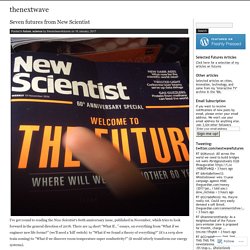 There are 14 short “What If…” essays, on everything from “What if we engineer new life forms?” (we’ll need a ‘kill’ switch) to “What if we found a theory of everything?” (it’s a very slow train coming) to “What if we discover room temperature super conductivity?” (it would utterly transform our energy systems). Charles Stross on Why Scifi Matters More When the Future Looks So Dangerous. Identifying socially-ecological bright spots that could grow & connect to produce a better anthropocene. Ct2: Breakup of the USA. Future Agenda - The world’s largest open foresight initiative. It's the year 2020...how's your cybersecurity? What if, in 2020, wearable devices did not care about how many steps you took, and instead were concerned with your real-time emotional state? 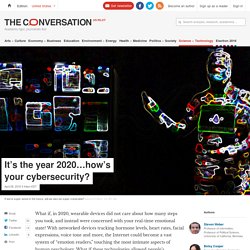 With networked devices tracking hormone levels, heart rates, facial expressions, voice tone and more, the Internet could become a vast system of “emotion readers,” touching the most intimate aspects of human psychology. What if these technologies allowed people’s underlying mental, emotional and physical states to be tracked – and manipulated? The Plutocratic Exit & their False Flag Alien Invasion Getaway [UFO/PES Part 1] Originally published in New Dawn Magazine Special Issue Vol. 10 No.1 Why are the super rich suddenly sponsoring SETI and getting all worried about asteroids (and AI)? 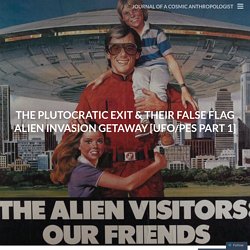 What use might they have in not just learning about possible extraterrestrials, but learning how WE react to them too? Is Elon Musk about to go into business with Alf or is an Alien Invasion the perfect cover for a takeover of Earth by an incredibly high-tech, but Earthbound – for now – Breakaway Civilisation? The world in 2065: what do social scientists think the future holds? Ignorant as I am, I don’t think I’d ever fully appreciated the breadth of disciplines involved in social science until I was asked to help judge the Economic and Social Research Council’s (ESRC) writing competition this year. 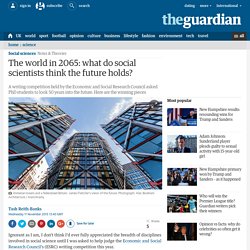 Held in conjunction with academic publisher Sage, and celebrating the ESRC’s 50th anniversary, the competition invited ESRC-funded PhD students from across the UK to use their creative and analytical skills and write a prediction of impact the social sciences and current research will have in 2065. Science communication is currently something of a buzz phrase in the academic world, so it was particularly interesting to see how this crop of up-and-coming scientists set about encapsulating their hopes and fears for their disciplines over the next 50 years in under 800 words. The overall winner was James Fletcher, and entries by Gioia Barnbrook and Josephine Go Jefferies were highly commended. CITY Inc. by James Fletcher. Fine Dining in the Apocalypse. What will we be eating in the post-apocalyptic world? 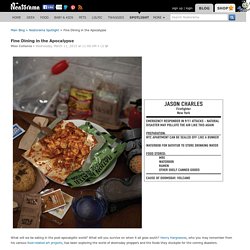 What will you survive on when it all goes south? Henry Hargreaves, who you may remember from his various food-related art projects, has been exploring the world of doomsday preppers and the foods they stockpile for the coming disasters. This is the best consultant presentation on the future you will ever read. ​We Made a Twitter Bot That Predicts the Future. Forward to the Future: Visions of 2045. 7 potential doomsday scenarios and the tech that will make them possible. The tech-pocalypse It's best not to put too much stock in doomsday theories. 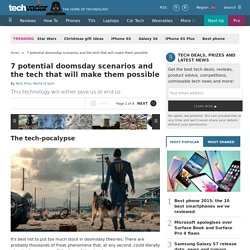 There are probably thousands of freak phenomena that, at any second, could literally wipe the human race off the face of the planet. That said, a little education on how the world might come to an end, mixed in with a bit of black humor, of course, might actually prevent that unfortunate future from ever coming to fruition. Or, you know, further a self-fulfilling prophecy. John Malkovich and Robert Rodriguez Have Made A Movie No One Will See For 100 Years.

20 Crucial Terms Every 21st Century Futurist Should Know. 20 Crucial Terms Every 21st Century Futurist Should Know. Trend Micro launches Project 2020 web series: a glimpse into the future to help us prepare our cyber defences. Tags: ICSPA , Europol , Project2020 , TrendMicro London, 23rd September 2013 - Trend Micro is proud to announce the launch of Project 2020, the web series: a set of online videos designed to get industry, business, government and other stakeholders thinking about the threats which may face them at the end of the decade so we can all better prepare for the future. 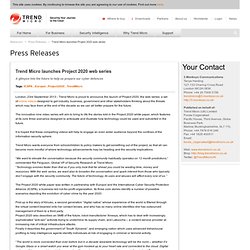 The innovative nine video series will aim to bring to life the stories told in the Project 2020 white paper, which features at its core three scenarios designed to anticipate and illustrate how technology could be used and subverted in the future. It is hoped that these compelling videos will help to engage an even wider audience beyond the confines of the information security sphere. 2020 by Trend Micro.