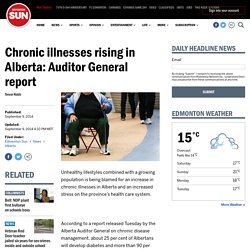 According to a report released Tuesday by the Alberta Auditor General on chronic disease management, about 25 per cent of Albertans will develop diabetes and more than 90 per cent will have high blood pressure by age 80. It’s diseases like these that are costing Alberta’s health care system billions of dollars. "Chronic diseases require the services of thousands of health care professionals and the infrastructure and systems to support them. People with chronic diseases account for nearly two-thirds of hospital inpatient days, one-third of all visits to physicians and more than one-quarter of visits to emergency rooms," reads the report. 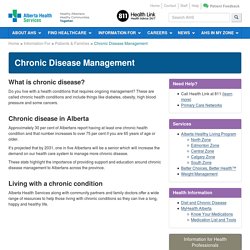 Do you live with a health conditions that requires ongoing management? These are called chronic health conditions and include things like diabetes, obesity, high blood pressure and some cancers. Chronic disease in Alberta Approximately 30 per cent of Albertans report having at least one chronic health condition and that number increases to over 75 per cent if you are 65 years of age or older. It’s projected that by 2031, one in five Albertans will be a senior which will increase the demand on our health care system to manage more chronic disease. These stats highlight the importance of providing support and education around chronic disease management to Albertans across the province. Acute Congestive Heart Failure and Pulmonary Edema. Introduction Congestive heart failure (CHF) is an imbalance in pump function in which the heart fails to maintain the circulation of blood adequately. 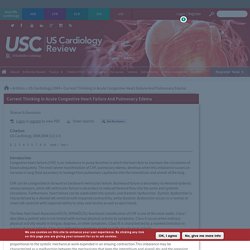 The most severe manifestation of CHF, pulmonary edema, develops when this imbalance causes an increase in lung fluid secondary to leakage from pulmonary capillaries into the interstitium and alveoli of the lung. CHF can be categorized as forward or backward ventricular failure. Backward failure is secondary to elevated systemic venous pressure, while left ventricular failure is secondary to reduced forward flow into the aorta and systemic circulation. Furthermore, heart failure can be subdivided into systolic and diastolic dysfunction. The New York Heart AssociationÔÇÖs (NYHAÔÇÖs) functional classification of CHF is one of the most useful.

Opposing forces responsible for fluid transfer to the interstitium include pulmonary capillary pressure and plasma oncotic pressure. Pulmonary Congestion in Acute Heart Failure: From Hemodynamics to Lung Injury and Barrier Dysfunction. Acute heart failure (AHF) has been defined as new-onset or worsening heart failure (HF) signs and symptoms requiring urgent therapy.1 AHF is a leading cause of morbidity and mortality.2 Despite the considerable variation of clinical profiles and the substantial heterogeneity of underlying causes, the vast majority of patients with AHF present with symptoms and signs of pulmonary and systemic congestion rather than low cardiac output. 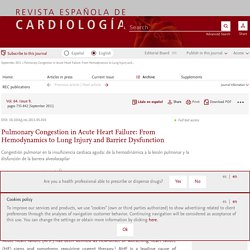 Accordingly, dyspnea is the cardinal presenting symptom among patients hospitalized for AHF.3. Pulmonary congestion is defined as accumulation of fluid in the lungs, resulting in impaired gas exchange and arterial hypoxemia. It occurs sequentially, first developing in the hilar region of the lungs, followed by filling of the interstitial space and finally, in its most severe form, by alveolar flooding. Pulmonary edema is the result of an imbalance between the forces that drive fluid into the alveoli and the mechanisms for its removal. Figure 1. Congestive heart failure: Stages, symptoms, and causes. Stroke - Topic Overview. Current as of: September 26, 2018 Author: Healthwise Staff Medical Review: E. 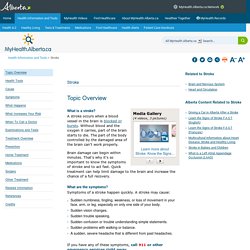 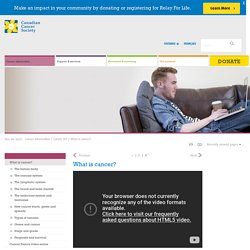 And depending how you classify cancer, you could even say that there are more than 200 types. All types of cancer start in our cells. Our bodies are made up of trillions of cells grouped together to form tissues and organs such as muscles, bones, the lungs and the liver. Genes inside each cell tell it when to grow, work, divide and die. Normally, our cells follow these instructions and we stay healthy. Are all tumours cancer? No. Other types of tumours are cancerous (malignant). It’s important to find cancer as early as possible, when it is usually smaller and easier to treat and there’s less chance that the cancer has spread. If bladder cancer spreads to the lung, is it called lung cancer?

Cancer: Overview, causes, treatments, and types. Arthritis. Overview Arthritis is inflammation of one or more of your joints. 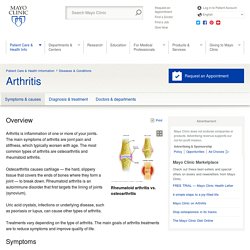