Kijk Nederlandse TV in het buitenland. Automatic Link Establishment. Wide-band WebSDR in Enschede, the Netherlands. Chatbox: This chatbox is intended to discuss the operation of the WebSDR. 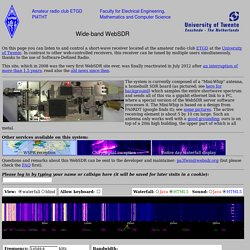 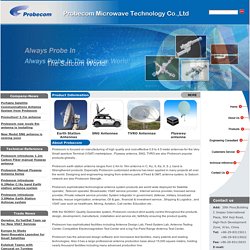 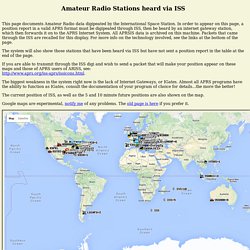 In order to appear on this page, a position report in a valid APRS format must be digipeated through ISS, then be heard by an internet gateway station, which then forwards it on to the APRS Internet System. All APRSIS data is archived on this machine. Packets that came through the ISS are recalled for this display. For more info on the technology involved, see the links at the bottom of the page. The system will also show those stations that have been heard via ISS but have not sent a position report in the table at the end of the page. If you are able to transmit through the ISS digi and wish to send a packet that will make your position appear on these maps and those of APRS users of ARISS, see: The biggest weakness in the system right now is the lack of Internet Gateways, or IGates.

Google maps are experimental, notify me of any problems. Recent activity. LIVE REAL TIME SATELLITE TRACKING AND PREDICTIONS. ISRO'S ANTRIX SAYS NEARLY 30 SATELLITE LAUNCH ORDERS IN THE PIPELINE - Emerging as a global competitive provider for satellite launches, Isro's commercial arm Antrix Corporation has almost 30 orders at hand from different countries for satellite launches which are scheduled to be completed in next two to three years. 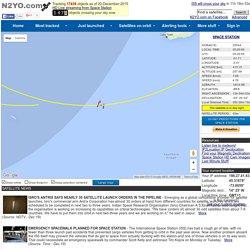 Indian Space Research Organisation (Isro) Chairman A S Kiran Kumar said tonight that the organisation is working on increasing its capabilities on critical technologies. "We have (orders of) almost 30 odd satellites from about 7-8 countries. We have to put them into orbit in next two-three years and we are working on it," he said in Jaipur. More (Source: NDTV - Dec 19) EMERGENCY SPACEWALK PLANNED FOR SPACE STATION - The International Space Station (ISS) has had a rough go of late, with no fewer than three launch pad accidents that prevented cargo vehicles from getting to orbit in the past year alone. Squid : Optimising Web Delivery. Squid is a caching proxy for the Web supporting HTTP, HTTPS, FTP, and more. 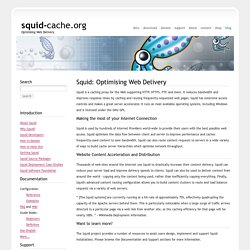 It reduces bandwidth and improves response times by caching and reusing frequently-requested web pages. Squid has extensive access controls and makes a great server accelerator. It runs on most available operating systems, including Windows and is licensed under the GNU GPL. Making the most of your Internet Connection Squid is used by hundreds of Internet Providers world-wide to provide their users with the best possible web access. Website Content Acceleration and Distribution Thousands of web-sites around the Internet use Squid to drastically increase their content delivery. [The Squid systems] are currently running at a hit-rate of approximately 75%, effectively quadrupling the capacity of the Apache servers behind them.