Parting Shot: Life-Size Lego Batman. As much as we loved the Lego Batman videogame, these life-size replicas of the Caped Crusader as captured by Flickr user MJ’laflaca are a whole different scale of awesome. 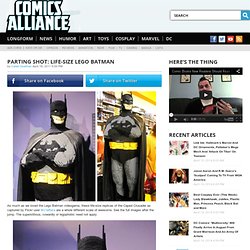 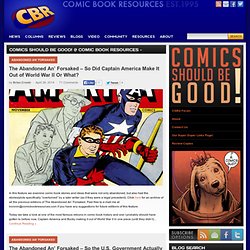 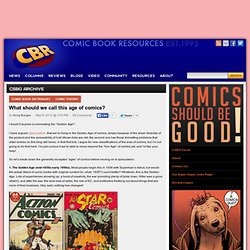 I have argued, twice before, that we’re living in the Golden Age of comics, simply because of the sheer diversity of the product and the accessibility of it all (those links are old; the second one has those formatting problems that older entries on this blog still have). In that first link, I argue for new classifications of the eras of comics, but I’m not going to do that here. I’m just curious if we’re able to move beyond the “Iron Age” of comics yet, and I’d like your help! So let’s break down the generally accepted “ages” of comics before moving on to speculation: Comic Book Easter Eggs Archive! By Brian Cronin| July 1, 2011 @ 11:59 PM |32 Comments| Here is an archive of all the Comic Book Easter Eggs that we’ve featured so far! 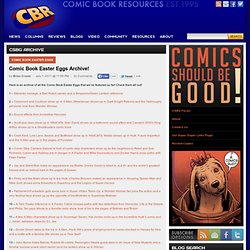 Check them all out! 1 – Steranko homage, a Bad Robot cameo and a Simpsons/Green Lantern reference 2 – Claremont and Cockrum show up in X-Men, Miracleman shows up in Dark Knight Returns and the Yarbroughs get some love from Wonder Woman 3 – Sound effects from Incredible Hercules 4 – Scott and Jean show up in WildCATs, Alan Davis shows us a bathroom sound effect and Camelot 3000′s King Arthur shows up in a Ghostbusters comic book 5 – Clark Kent, Lois Lane, Beavis and Butthead show up in WildCATS, Waldo shows up in Hulk: Future Imperfect and the X-Men pop up in the pages of Punisher 6 – Comic Strip Cameos Galore! 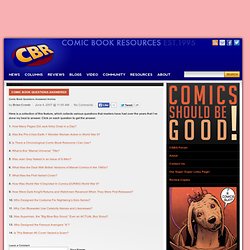 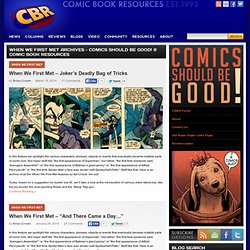 @ Comic Book Resources When We First Met – Joker’s Deadly Bag of Tricks by Brian Cronin| March 15, 2014 |17 Comments| In this feature we spotlight the various characters, phrases, objects or events that eventually became notable parts of comic lore. Not major stuff like “the first appearance of Superman,” but rather, “the first time someone said, ‘Avengers Assemble!’” Today, based on a suggestion by reader Joe M., we’ll take a look at the introduction of various Joker stand-bys, like the joy buzzer, the acid-squirting flower and the “Bang” flag gun… Continue Reading » When We First Met – “And There Came a Day…” by Brian Cronin| January 26, 2014 |24 Comments| This is a special mini-edition of When We First Met, answering a question I just got on Twitter from T_Campbell Hey, do you know when the Avengers lead in “a day unlike any other” made its first appearance?