Transgender people are people whose gender identity is different from the gender they were thought to be at birth. “Trans” is often used as shorthand for transgender. When we're born, a doctor usually says that we're male or female based on what our bodies look like. A transgender woman lives as a woman today, but was thought to be male when she was born. Transgender FAQ. To learn more about how to be an ally to transgender people, check out GLAAD's Tips for Allies of Transgender People. 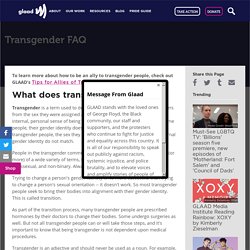 Our Trans Loved Ones. A beginner's guide to being an ally to trans people. Transgender Awareness Week is a time where we share and uplift the voices and experiences of the trans community, which includes celebrating the victories of trans folk while also remembering and honoring all members of our trans family who have lost their lives to anti-trans violence. 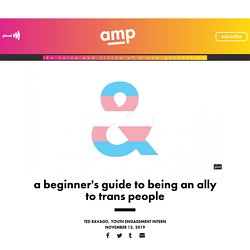 As a part of uplifting the trans community, it’s important that allies also take part. Of course, everybody is at different levels of knowledge on how to support trans people. So, as someone who is currently discovering their transness and also had to do a lot of learning and internal work on my journey, here is my beginner’s guide to being a trans ally. 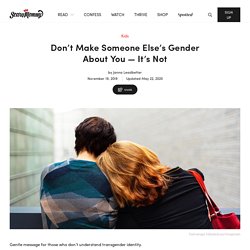 I’ve lost count of the private messages sent to me since the announcement about my own female-to-male son, a high schooler, a few months ago. Only one was negative and hateful; all the rest say some version of, “We’re actually experiencing this with my so-and-so, and it helps to hear blah-de-blah. Thank you for sharing.” And yet with as many as are directly involved with someone who is transgender, I think a large number still don’t realize how many humans belong to the LGBTQ+ spectrum.

The chances that you know someone—and further, love someone—who sees their identity within that spectrum is far more likely than not. “Kids these days” aren’t jumping on the bandwagon, just doing whatever their peers are doing. It’s okay if you don’t understand transgender identity, but remember your personal life doesn’t change a bit because of another human’s truth.

Resources - Trans Lifeline - Peer support services, hotline and resources for Transgender People. Since 2016, Microgrants has been working with community members, organizations, and volunteers to create a readily accessible database, holding all of the national information surrounding ID changes, in one place. 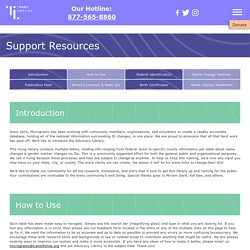 We are proud to announce that all that hard work has paid off! We’d like to introduce the Advocacy Library. This living library contains multiple tables, holding info ranging from Federal down to specific county information per state about name changes & gender marker changes on IDs. This is a community supported effort for both the general public and organizational purposes.

We call it living because these processes and fees are subject to change at anytime. We’d like to thank our community for all the research, translation, and entry that it took to get this library up and running for the public. Each table has been made easy to navigate.